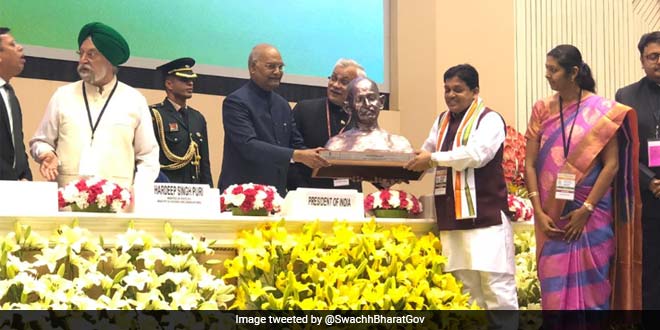 New Delhi: After securing the third rank as the cleanest state last year, Chhattisgarh has climbed two spots and has been announced as the cleanest state in Swachh Survekshan 2019. The state has been lauded for its efforts towards ‘Swachh Chhattisgarh’ initiative. The authorities from the state have dedicated the honour to the passion and commitment of their citizens and Urban Local Bodies.

The state was declared Open Defecation Free (ODF) on October 2, 2018 and the authorities have claimed that the sanitation coverage of Chhattisgarh has gone from 10 per cent in 2014 to 100 per cent at present.

The state has successfully constructed over 3 Lakh individual household toilets and 4,000 public and community toilets in the urban areas with approximately 170 cities and 27 districts, declared ODF.

97 per cent of the state has managed to receive a star rating whereas Seven ULBs have received 3 star rating under the garbage free city by fulfilling protocols like door to door collection, waste segregation, sweeping of public, commercial and residential areas, among other protocols.

Explaining other achievements of the state, a Swachh Bharat Abhiyan Officer told NDTV,

Additionally, Ambikapur secured the second position nationally and is one of the three cities that has received a 5 star rating in the garbage free cities. Ambikapur, also is a bin free and a zero-landfill city, has emerged as a role model for effective waste management.

The official tells NDTV that the other parts of the state are also moving towards adopting Ambikapur’s waste management model and the main aim of the state is now to convert into a zero-landfill state.

Apart from Ambikapur, Bhilai Nagar has managed to secure 11th rank nationally as compared to 72nd in Swachh Survekshan 2018. When it comes to comes to the citizen feedback, the Ministry of Housing and Urban Affairs explains that more than 70 per cent of the state’s ULB scored over 70 per cent marks.