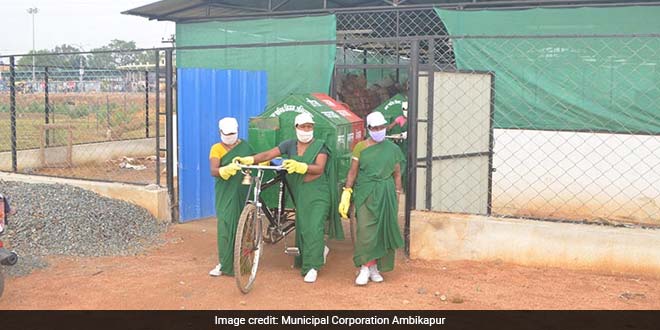 New Delhi: Ambikapur, a small city with a population of 1.96 lakhs in Surguja district of Chhattisgarh, got declared as ‘India’s Cleanest City Number 2’ in Swachh Survekshan 2019. While Indore got adjudged as ‘India’s Cleanest City’ for the third time, Mysuru secured the third position. The results were announced on March 6 by President Ram Nath Kovind along with the Minister of Housing and Urban Affairs Hardeep Singh Puri and Secretary, Ministry of Housing and Urban Affairs (MoHUA), Durga Shanker Mishra in New Delhi. Touted as world’s largest cleanliness survey by the government, Swachh Survekshan assesses and ranks the cities on the basis of cleanliness.

In Swachh Survekshan 2019, 4,237 towns and cities and 62 Cantonment Boards were evaluated out of 5,000 marks and data was collected from four different sources – citizen feedback, direct observation, service level progress and certification for garbage and open defecation free cities. The city of Ambikapur secured 4394 out of 5,000.

This year the city received 5 star rating of ‘Garbage Free Cities’. Star Rating of Garbage Free Cities is based on SMART Framework – Single metric, Measurable, Achievable, Rigorous verification mechanism and Targeted towards outcomes. The key indicators are cleanliness of drains and water bodies, plastic waste management, managing construction and demolition waste, source segregation, and others. A city gets 5 star rating from the Ministry post third party assessment only.

Ambikapur gets awarded for being a 5 Star Garbage Free City. #SwachhSurvekshan2019 pic.twitter.com/HM520zA489

The city has implemented ICT (Information and Communications Technology) based monitoring mechanism that aids is tracking garbage vulnerable points, sanitation staff, collection and transportation of waste, and emptying of litter bins.

Ambikapur, a bin free city, has executed 100 per cent door-to-door waste collection and segregation. While the wet waste is either converted into compost which is further sold at a nominal price or used to generate cooking gas, dry waste like paper, plastic, is sent for recycling at a cost price. This way, 100 per cent of the waste generated by the city gets treated in the city itself. Not only is this, the city has the coveted landfill free city tag as well. Existing dumpsites have been remediated and converted into a sanitary park.

Because of its efficient waste management system, Ambikapur was rewarded as one of India’s best city in ‘Innovation and Best Practices’ (population 1 – 3 lakh) category in Swachh Survekshan 2018.

Ambikapur achieved well in terms of sanitation as well. As per the citizen feedback, 98 per cent of the citizens are satisfied with accessibility and cleanliness level of toilets and urinals. Moreover, the city has ODF Plus Plus tag also which centers around achieving sanitation sustainability by addressing complete sanitation value chain, including safe containment, processing and disposal of fecal sludge and septage.

Applauding Ambikapur’s swachh efforts, former Chief Minister of Chhattisgarh, Dr Raman Singh said, “Ambikapur securing second position in Swachh Surveshan 2019, boosts our morale and aspirations. Now the vision of the countrymen is looking at a new dimension. I hope the present Government will continue to maintain this record of sanitation in the state.”