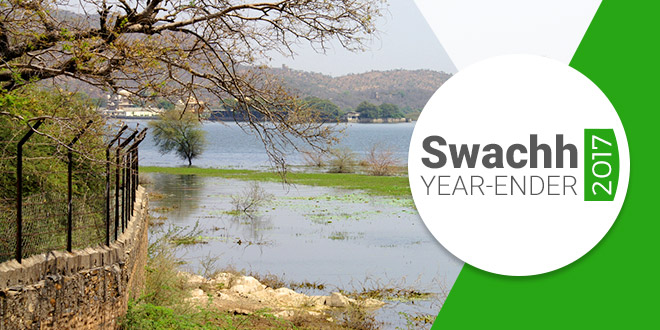 New Delhi: It was on a slightly chilly morning in February 2017 when residents of Bellandur in Bengaluru woke up to the sight of thick smoke emerging from the famous Bellandur lake. It worsened as days went by, as toxic froth from the lake flowed into Bengaluru’s roads,often blocking traffic and exposing people to toxins. The Bellandur incident raised the larger question of how rapid urbanisation was choking the life out of India’s lakes as similar incidents were reported from elsewhere through 2017.

Several solutions were proposed to tackle the increasing problem of polluted lakes in Indian cities, making 2017 an important year for lake pollution in the country.

400 fishing families, a sea-plane channel and water that could be consumed directly from the lake; all these are reminiscences of Bellandur lake’s glorious past when the lake was an integral part of the city. 2017 however turned out to be a particularly bad year for the lake, as three incidents of fire breaking out from the lake and toxic froth were reported. Incessant garbage disposal by surrounding residential apartments and development of thick weed has turned the lake into a dangerously inflammable zone. This year saw the National Green Tribunal step in to address the Bellandur crisis, summoning top government officials of Karnataka and asked them to submit a concrete plan of action to clean the lake. As of December 2017, the Bruhat Bengaluru Mahanagara Palike (BBMP), Bengaluru’s civic body was yet to complete its task of cleaning up the lake. Full rejuvenation of the lake will only be possible by 2020, the BBMP has already told NGT.

Varthur Lake: A Story Of Froth And Administrative Apathy

“Happens every year, not a problem”

Karnataka Chief Minister Siddaramaiah’s statement on the massive toxic froth outbreak in Bengaluru’s Varthur Lake may go down as the statement of 2017 that highlights what ails our lakes and environmental causes in general. In September this year, Bengaluru’s Varthur lake, like Bellandur caught fire, along with shooting toxic foam at passing motorists. Branded as ‘chemical snowfall’ the 2017 toxic foam was the worst in last five years, as pointed out by the state pollution control board. The pollutants which included dissolved sulphur, zinc and mercury were nearly thrice in amount than earlier years. Though the BBMP is presently formulating a plan to clean up the lake, the massive increase in pollutants in Varthur lake in 2017 shows that the lake is rapidly progressing towards complete decay.

From Dead Fish To Dumping Grounds, The Sad Tale Of Hyderabad’s Lakes

2017 turned out to be a particularly bad year for India’s lakes. Three incidents of severe lake pollution were reported from Hyderabad in April-May 2017, which resulted in the death of over 90,000 kilograms of fish. The lakes of Ramapally, Shamirpet and Medchal showed extraordinary levels of pollution this year, resulting in massive loss of lake fauna. In October 2017, the Greater Hyderabad Municipal Corporation (GHMC) formed an expert committee comprising local municipal councilors, environmentalists and municipal officials. It was decided that dumping of chemical and solid waste in the lakes will be banned, along with an imposition of Rs 500 as fine on violators. Indiscriminate disposal of waste in Hyderabad’s Kaggadasapura lake saw toxic fumes emanating in overwhelming quantity in November 2017, a problem the GHMC is yet to address or solve. Kaggadaspura’s deterioration hit a new low this year as till 2016 it was one of the clean lakes, as listed by the GHMC itself. The downfall within a year has been due to increase in industrial pharmaceutical units around the lake in the last 10-12 months, which spill toxic waste regularly in the lake.

2017 also saw a hopeful turnaround for Kashmir’s Wular lake, where 18-year-old Bilal Ahmed Dar was appointed as the brand ambassador for the Srinagar Municipal Corporation (SMC). He earns his living by picking up waste including polythene, plastic trash and floating carcasses from the Wular Lake in north Kashmir. In the last 50 years the size of the largest fresh water lake of Asia has dropped from 273 kilometres to just 72 kilometres water expanse. However, the SMC is hopeful that Bilal’s appointment will ensure that Wular remains clean and pollution free, making the act an optimistic example in what has otherwise been a  year of concern for Indian lakes.

The importance of lakes in urban areas is akin to rivers and seas. People do not understand this before polluting lakes. But lakes, if maintained properly, can be a useful source of freshwater for cities. Sadly the condition of lakes seems to get worse every year there is very less discussion on the necessity to save our lakes, said Dr Lubna Sarwath of Save Our Lakes, Hyderabad.

“The problem with lakes and urban spaces is that no singular body is responsible for their preservation, making it difficult for civic bodies to take steps,” said Manjunath Prasad, Municipal Commissioner BBMP.

Mr Prasad’s comments come at the wake of long debates at the National Green Tribunal, where BBMP, the Bengaluru Development Authority and the Karnataka state government were all pulled up for the Bellandur and Varthur lake mess. Each of the bodies have different sets of responsibilities for maintaining the city’s lakes and often run into each other, resulting in the lakes’ problems to continue. The BBMP commissioner said that in 2018, they will continue cleaning the lake by de-weeding it and ensuring that the fences around the lake keep violators away.

GHMC Commissioner B. Janardhan Reddy said that lakes will be a special focus for the municipal body in 2018. The special committee for lake rejuvenation has already sent notices to all industrial units around lakes and will start monitoring them from next year to check whether they are disposing any waste inside the lakes or not.

Not just toxic fumes and froths, 2017 was a bad year for India’s lakes because no concrete solutions were put in place by any state government to address the lake pollution issue. Though municipal corporations in Bengaluru and Hyderabad have advocated for abetter 2018 for lakes, the gargantuan problem of lake pollution can only be solved with conservation policies in place for sustained time periods.

How To Organise An Eco-Friendly New Year Bash. Here Are Top 5 Ideas