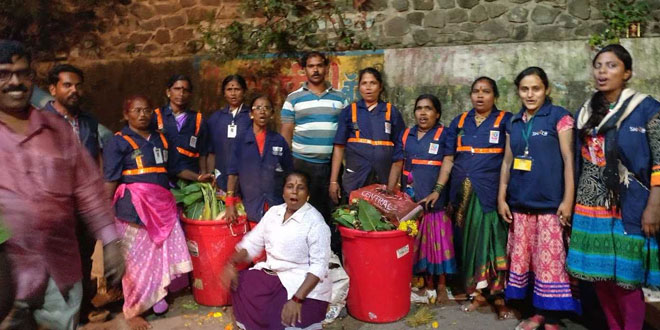 New Delhi: From Bollywood stars to sports personalities, politicians, army and navy commandos, last 15 days have seen everyone come out with a broom in their hand to become a part of the Swachhata Hi Seva, to mark three years of Swachh Bharat Abhiyan. The whole country swung into action to do mass Shramdaan for building toilets and cleaning of public places. On September 15, the #SwachhataHiSeva was launched by President Ram Nath Kovind in order to give a push to ongoing Swachh Bharat mission efforts. In terms of the impact of Swachhata Hi Seva campaign, government data reports that 75 lakh people joined swachh activities with more than 40 thousand initiatives.

Also Read: Here Are The Regions That Will Go #OpenDefecationFree this #RashtriyaSwachhtaDiwas

These efforts are the part of the special 15-day cleanliness drive which was initiated by Prime Minister Narendra Modi last month during his monthly radio programme Mann Ki Baat.

Here’s a recap of how India is gearing up to celebrate Rashtriya Swachhta Diwas on October 2.

Talking about the states, Madhya Pradesh has set an ambitious target for toilet construction, the State aims to build more than 1 lakh toilets by October 2, 2017 as a part of their #SwachhataHiSeva campaign. Chhattisgarh constructed 10,000 toilets in 10 days as part of the initiative, the next target is to start construction of 15,000 toilets from October 2, 2017 in 15 days in Arang block, the second largest block in Rural Chhattisgarh.

From states to cities, Varanasi trained over 5,000 masons in twin pit toilet technology who are building 1100 toilets every day in a bid to make Varanasi open defecation free by December 31, 2017 by constructing 2.51 lakh toilets. Varanasi aims to make two blocks out of its eight blocks free from open defecation by October 2, 2017. Prime Minister Narendra Modi himself performed Shramdaan for the construction of a twin pit toilet in Varanasi, to spread the message regarding the importance of having toilets at home.

As a part of #SwachhataHiSeva movement, did Shramdan for the construction of a twin pit toilet at Shahanshahpur, Varanasi. pic.twitter.com/53WDxYL7nq

Coming to the districts of India, Perambalur district of Tamil Nadu achieved an ambitious feat of constructing 4,666 individual household toilets in 48 hours. Koppal district of Karnataka built 10,000 toilets in 200 hours as a part of their Swachhta Hi Seva campaign.

Students from Kondagaon District of Chhattisgarh took out a special #SwachhataHiSeva rally in which they spread the message of cleanliness and open defecation free. Thousands and thousands of people gathered and formed symbolic Mahatama Gandhi’s glasses in a bid to pass on the message of Clean India.

According to the government, because of the special 15-day cleanliness drive Swachhata Hi Seva, sanitation coverage in rural areas has increased. From 197 districts now India has more than 200 open defecation free districts.

Apart from the states, cities, districts and villages, Swachhta Hi Seva campaign got support from people from all walks of life. Actor Anushka Sharma came forward to cleanup Mumbai’s Versova beach, whereas Cricket icon Sachin Tendulkar along with his son Sachin Tendulkar and Yuva Sena President Aaditya Thackeray, carried out a special swachhta drive near the famous fort of Bandra.

Even Football team did its bit for the ‘Swachhata Hi Seva’ movement through a cleanliness drive in Mumbai with their coach Stephen Constantine.

Other film stars and sport personalities, who also voiced their support and spread the message of Swachhta include, Rajnikanth, Anil Kapoor, Aishwarya Rai Bachchan, Virat Kohli and his boys, Paralympic javelin thrower Devendra Jhajharia among others.

Appreciable gesture by @DevJhajharia. His participation in #SwachhataHiSeva adds great strength to the movement. https://t.co/ygLiPvCz4I

The renowned sand artist from Odisha, Sudarsan Pattnaik as a part of his Swachhata Hi Seva, carried out a cleanliness drive at Rohtangpass in Manali, Himachal Pradesh. He also constructed two toilets for fishermen in Puri after receiving a letter from PM Modi.

World famous Sand Artist @sudarsansand constructed 2 toilets for fishermen in Puri out of his award money after receiving a letter from PM. pic.twitter.com/qPSnvOUbTJ

Till date, six states of India – Sikkim, Himachal Pradesh, Kerala, Rural Haryana, Rural Uttarakhand and Urban Maharashtra have been declared open defecation free, around 2.5 lakh villages and more than 200 districts have attained 100% sanitation coverage. On October 2, when the 15-day Swachhata Hi Seva campaign will culminate, it is expected that a lot of states, villages and areas will declare themselves free from open defecation.