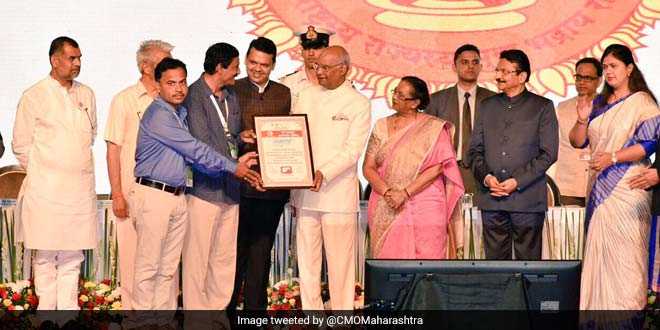 New Delhi: ‘We had decided to make Urban Maharashtra Open Defecation Free (ODF) on October 2, 2015 and it’s a great day today as we have achieved the target. It is a historic moment for Maharashtra as it achieves the mammoth task of declaring its Urban Areas free from open defecation,’ said Maharashtra Chief Minister Devendra Fadnavis in Mumbai at an event organised to announce the Urban areas ODF. As of date, India has 5 open defecation free states – Sikkim, Himachal Pradesh, Kerala, Haryana and Uttarakhand. Today Maharashtra joins this ODF chain and became the sixth state to declare its urban areas ODF.

Also Read: Can The Second Most Populous State Of India – Maharashtra Achieve Its Open Defecation Free Target By March 2018?

The ODF declaration of urban areas of the state has come after a three tier validation process, explaining the process, Devendra Fadnavis added, first the cities were inspected by the local administration, then by the state government and lastly by a central agency. All have given a nod to declare Urban Maharashtra open defecation free.

He also added, “Now we have a double responsibility at hand. We have to encourage people to use the record number of toilets created in the last two years. For this we have created a mechanism called ‘ODF Watch’ where people will be forced, encouraged to use a toilet. If they defecate in the open, a whistle will be blown and people will be shamed for not using a toilet.”

He further added that the mechanism will work from morning until the dusk for the next six months, to ensure people use a toilet.

In the last two years, approximately 40 lakh toilets have been constructed in the state. The chief minister said by March next year, rural Maharashtra too will be declared ODF.

Open Defecation Sorted, Now Next What

Speaking about the future plans of the government, Devendra Fadnavis said that the government will also focus on segregation of waste scientifically and treat sewage water.

Many have sacrificed their dreams to ensure that we all see this day in our life!Now we are planning to make Rural Maharashtra ODF by March’18. Also working on STPs, treatment on waste water,scientific segregation to make‘CleanMaharashtra’a reality:CM @Dev_Fadnavis in #Mumbai pic.twitter.com/G4Sb45WohF

#SwachhataHiSeva Recap: Here’s How India Cleaned Up Their Surroundings To Mark 3 Years Of Swachh Bharat Abhiyan On October 2