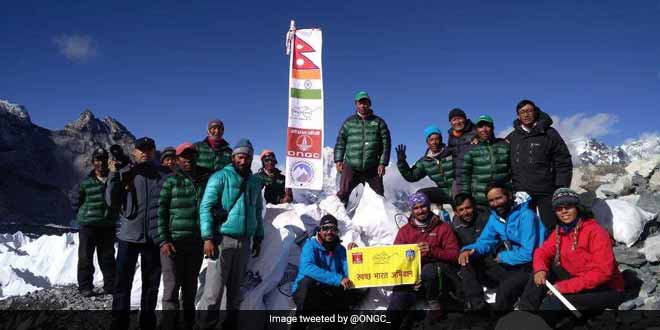 New Delhi: Rapid climate change and resulting meltdown of the Himalayan glaciers is taking a toll on the Ganges. As per a report in the Environmental Pollution journal, years of pollutants and trash accumulated under glaciers are gradually finding their way into the Ganga and its tributaries as the glaciers are melting away faster due to climate change. In an attempt to draw the country’s attention towards this growing crisis, the Oil and Natural Gas Corporation (ONGC) has come forward to clean the Indian Alps.

Under the fortnightly Swachhta Pakhwada (conducted from 16th to 31st July), ONGC signed Memorandum of Agreement (MoA) with Indian Mountaineering Federation (IMF) on July 24. As per the MoU, officials from ONGC will clean three source tributaries of Ganga in Uttarakhand – Bhagirathi, Alaknanda and Pindari.

‘Cleanathon Himalaya’ is a CSR initiative of ONGC that aims to clean source of 3 tributaries of Ganga-Bhagirathi,Alaknanda & Pindari pic.twitter.com/xYJHEFdhvL

A trained team of mountaineers from ONGC and locals having mountaineering background will carry out the cleanliness expedition in three tributaries covering nearly 20 kilometres stretch per location. Once all the garbage is removed, it’ll be segregated into bio-degradable and non-biodegradable waste and will be deported to the nearest disposal site/dumping yard. The ONGC officials have tied up with local authorities to ensure regular removal of trash from the bins. Awareness about personal hygiene, sanitation and the benefits of cleanliness will also be created among the villagers.

Plans afoot to make #SwachhHimalayas a perpetual campaign to clean&revitalise the most unique symbol of our ecosystem: DD Misra, DirHR, ONGC pic.twitter.com/GreLysPXJl

ONGC had earlier carried out cleanup drives in important peaks and glaciers of Himalayas in Uttarakhand, Himachal Pradesh, J&K and Arunachal Pradesh. In 2015, a cleaning expedition was conducted in Gangotri Region and Pindari Area in Uttarakhand where hazardous garbage and wastes generated by tourists were removed. In Phase II, banks of Gaumukh, Tapovan and Nandanvan were cleaned and finally in March 2017, areas in Arunachal Pradesh and Jammu and Kashmir were taken up.

In the current round of cleanup, a total of Rs 35.4 Lakhs will be invested in the cleanup drive, with each expedition consisting of 8-10 member teams.

The duration of each cleaning expedition will be 23 days which from starting in July 2017 and will be completed by December 2017.