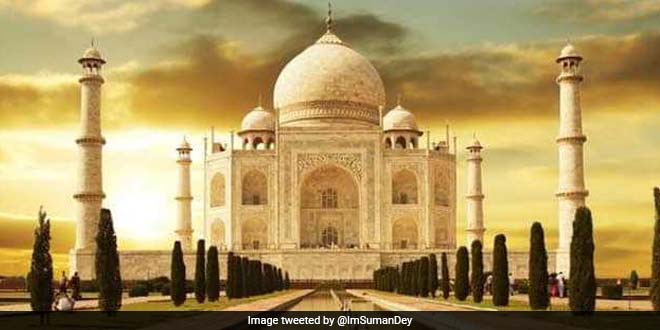 New Delhi: The Supreme Court on Tuesday extended the deadline to November 15 for Uttar Pradesh government to come out with a vision document on protecting the Taj Mahal, and asked it to consider declaring a portion of the area surrounding the monument as ‘heritage’. A bench of Justices Madan B Lokur, S Abdul Nazeer and Deepak Gupta was informed by the state government that Delhi-based School of Planning and Architecture, which is preparing the vision document, has sought for extension of time till November 15 to finalise it.

Additional Solicitor General (ASG) Tushar Mehta, who was appearing for the state government, told the court that “in-principle” there cannot be any objection in declaring entire Agra as a heritage city but that would have several ramifications. He said it would be difficult to declare entire Agra a heritage city but some portion of it could be brought within its ambit covering sites like Taj Mahal, Fatehpur Sikri and Agra Fort.
“If it is difficult for entire city of Agra then some area surrounding the Taj Mahal can be declared as heritage,” the bench told ASG Tushar Mehta. The ASG said the state government has sought the assistance of Ahmedabad-based Centre for Environmental Planning and Technology on this issue and asked it to prepare a report on it. Advocate Aishwarya Bhati, who was also representing the state, told the bench that even in Ahmedabad, the entire city was not declared as heritage. She said an area of around 5.5 km in Ahmedabad was declared as heritage.

Besides seeking extension of time for the vision document, Ms. Bhati told the bench that School of Planning and Architecture has asked for three additional experts from the field of water resources, air pollution and a hydrologist to prepare the paper. She suggested the names of institutes from where these experts could be called to assist the school in the work. The bench allowed the request and asked the person in-charge of these three institutes to appoint an expert to assist in the process of preparing vision document.

The ASG said that a communication will be sent to the Ahmedabad-based institute so that a final decision on declaring portion of Agra city as heritage could be taken soon. The bench has posted the matter for hearing on November 29. During the hearing, the bench, while referring to media reports, asked as to whether Chandni Chowk in Delhi would be declared as heritage. The state had earlier told the court that they would come out with vision document by October 15. The Centre had earlier told the court that it had communicated to the Uttar Pradesh government to send a proposal to declare Agra a ‘heritage city’. It had also said that the Archaeological Survey of India (ASI) was in the process of preparing a heritage plan for the Taj Mahal which would be filed with the UNESCO in three months.

The apex court had earlier asked the authorities to take a larger perspective on issues of pollution and green cover while preparing a vision document, saying that there will be no “second chance” to preserve the Taj Mahal. The top court, while observing that the Taj Mahal would “of course be the centre piece” of the matters to be considered, had said that other issues like vehicular traffic, pollution from the industries operating in the Taj Trapezium Zone (TTZ) and the water level of the Yamuna river, should also be looked into while preparing the vision document. The TTZ is an area of about 10,400 sq km spread over the districts of Agra, Firozabad, Mathura, Hathras and Etah in Uttar Pradesh and the Bharatpur district of Rajasthan.

Environmentalist M C Mehta, the petitioner in the case relating to the protection of Taj Mahal, had told the court that green cover in the area has reduced and there were encroachments in and outside the Yamuna flood plains there. He had referred to apex court’s 1996 order in the case and said several industries have come up in the area, with many of them operating beyond their capacity. The top court, which has been monitoring development in the TTZ area to protect the Taj, had earlier slammed the Centre, Uttar Pradesh government and TTZ authority for their failure to restore the pristine glory of the Taj Mahal.