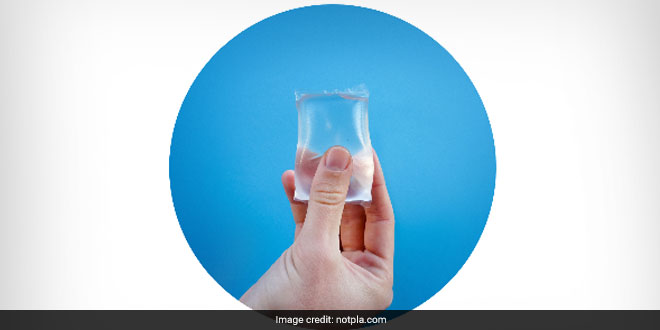 New Delhi: Every time you buy a water bottle from the market, you’re contributing to the ever-growing plastic waste menace surrounding the planet, by throwing the empty bottle in the trash. According to a report by Great Britain’s Royal Statistical Society, about 8.3 billion metric tonnes of plastics have been manufactured till date, most of which are single-use. The study further states that a whopping 91 per cent of this trash doesn’t get recycled and end up in the landfills and oceans. Keeping these jaw-dropping facts in mind, the participants of the London Marathon were given edible-water capsules to help reduce the plastic waste burden.

As the 41,000 participants of the annual London Marathon covered the distance of about 42 kms, they were handed the edible water and energy drink pods or capsules made of seaweed extracts, each time they required water. These water pods are known as Ooho and are an edible jelly-like sphere filled with drinkable liquid covered with Notpla, a material made from seaweed and plants which is edible as well as biodegradable and disappears, naturally.

If the participants didn’t wish to eat the cover, they could also throw it onto the ground, as the pods are designed to biodegrade within six weeks, compared to its counterpart plastic that takes 500 years to decompose. Ooho is manufactured by Skipping Rocks Lab, a London-based startup that’s developing alternatives to plastic products.

The move, a brainchild of the London Marathon, did not only help reduce the redundant plastic waste of more than 40,000 people but also helped create awareness about the alternatives to plastic bottles. The water pods may help find a strong alternative to single-use plastic bottles and could be used for other events such as music festivals among others.

Last year, during the London Marathon about 5,200 kg of plastic waste, including 47,000 plastic bottles were found in the streets of the city. The pods are part of several green changes trialed by the organisers this year. Other measures included reducing the number of drink stations and plastic bottles, using compostable cups, and only using plastic bottles made from 100 per cent or 50 per cent recycled plastic.

Lack Of Menstrual Hygiene Is Taking A Toll On Education Of More Than 5 Lakh Girls In Uttar Pradesh: Survey