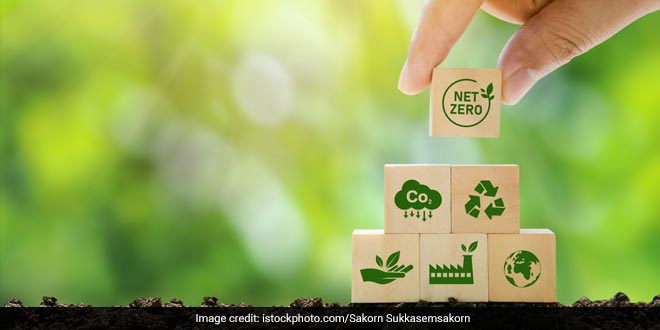 New Delhi: The government is taking measures to make India a market for carbon credit which will be utilised to meet the country’s NDC goals, Union Minister for New and Renewable Energy R K Singh said on Thursday (October 6). India has submitted its updated Nationally Determined Contribution under the Paris Agreement to the UN Framework Convention on Climate Change, emphasising that it is a step forward towards its long-term goal of reaching net zero by 2070.

According to the updated NDC, India now stands committed to reducing the emissions intensity of its GDP by 45 per cent by 2030, from the 2005 level, and achieving about 50 per cent cumulative electric power installed capacity from non-fossil fuel-based energy resources by 2030.

However, the carbon credits generated in India will first be used to meet the country’s NDC goals. The remaining can be sold outside the country, he said.

We would want to keep it (carbon credits) to ourselves because we want to achieve our NDCs but anything beyond what we require can be sold anywhere in the world. So, other countries can look forward to huge quantities of carbon credits being available in India.

India is also taking measures to diversify its supply chain in the area of solar manufacturing, the Minister said in a reply to a question on disruptions occurring in Europe due to the Russia-Ukraine conflict.

The energy crisis in Europe is a concern. It is something which is a result of the ongoing conflict (between Russia and Ukraine) and supply chains getting disrupted. Such disruptions can happen at any time. One needs to diversify supply chains that not only go for petroleum products but also for polysilicon to solar modules, Mr Singh said.

We have taken steps to ensure that supply chains are diversified. We came up with a PLI for manufacturing polysilicon cells to modules. We are going to come up with another PLI that will again put in place 40 GW of manufacturing capacity from polysilicon to wafers and cell modules. We are putting in place mechanisms to diversify supply chains and ultimately this also shows the world will move towards energy transition.

According to an official statement, the Fifth Assembly of the International Solar Alliance will be held in New Delhi from 17 to 20 October 2022. India holds the office of the President of the ISA Assembly.

Ministers, missions and delegates from 109 Member and Signatory Countries are set to participate in this meeting. The Assembly will be presided over by R.K. Singh, Union Minister for Power, New and Renewable Energy.

Hyperlocal Emissions Behind Spike In Pollution In Delhi On Dussehra