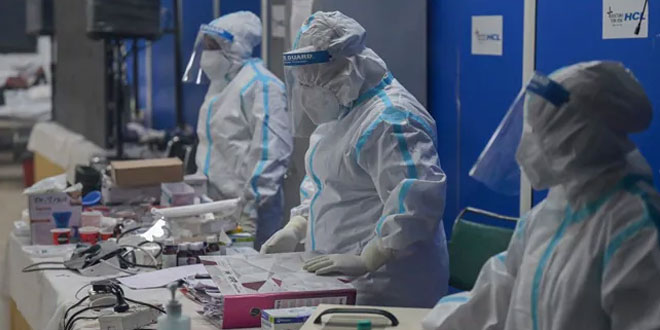 New Delhi: Manindra Agrawal, Professor of IIT Kanpur, said that the third wave of COVID-19, which is caused by Omicron, has reached its peak in Delhi, Mumbai and Kolkata as predicted by IIT’s Sutra model. He further said that COVID-19 will peak in Maharashtra, Gujarat and Haryana this week. Earlier in an interview with ANI, Mr Agrawal, who developed the model, had predicted that the COVID-19 third wave will peak by January end.

Mr Agrawal said that COVID-19 is spreading faster in India than projected earlier. In a series of tweets, the IIT Professor said,

There appear two plausible reasons for this: 1) there are two groups in the population, one with less immunity against Omicron and the other with more. The mutant first spread in the first group causing a sharp rise. Now the first group is exhausted and so the spread is slower.

He further said, “Second, there was a lot of concern when Omicron started spreading, but in the last week or so, people almost everywhere have concluded that it causes only mild infection and have decided to handle it with standard remedies instead of getting tested.”

He further said that southern states like Andhra Pradesh, Karnataka and Tamil Nadu will see the current wave peak next week.

UV-C Effective In Mitigation Of Airborne Transmission Of SARS-COV-2: Minister

Omicron – Should It Be Treated As Common Cold? Top Doctors Say We Should Not Make That Mistake