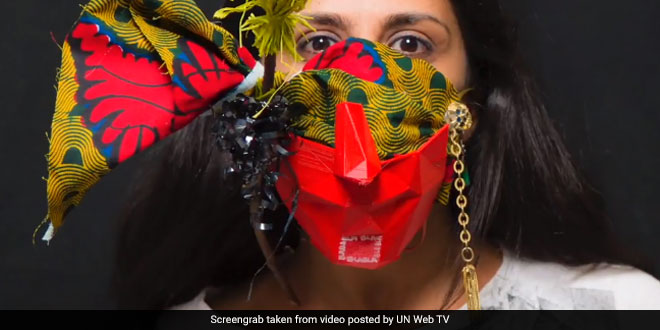 New Delhi: Picture this – A bunch of people coming together wearing a mask to make a statement. While some are wearing a mask with vegetables and fruits on it, the mask on a small girl’s face reads out ‘help’, some others are sporting a mask with a cycle made using paper on it. The objective of all these masks is to drive home the message to beat air pollution.

These individuals, belonging to different walks of life, have been brought together by the United Nations Environment Programme (UNEP) as part of their ‘Mask Challenge’, aimed at fighting for clean air. The challenge started by the UNEP on May 24 is in line with the theme of this year’s World Environment Day – beat air pollution.

How To Participate In The Mask Challenge To #BeatAirPollution

The challenge asks people to take a photo or video of themselves wearing a mask and post it on social media. Individuals who don’t own a mask can don the creative hat and make their own mask. The challenge further asks participants to take this forward by tagging three people/organisations/companies and challenging them to further do the same.

UNEP Suggests The Ways To #BeatAirPollution

While sharing the photo on social media, contributors have to briefly mention about the actions they will take to reduce air pollution. Here are some suggested steps to beat air pollution:

Mask Challenge Gets Entries From All Across The World

Bollywood actor and UN Secretary General’s Advocate of Sustainable Development Goals Dia Mirza participated in the mask challenge by wearing an anti-pollution mask and pledging to compost waste. The actor shared her entry for the challenge on social media and said, “Air pollution is the silent killer, causing 7 million premature deaths every year. Globally, an estimated 40 per cent of waste is openly burned. To #BeatAirPollution with @UNEnvironment for #WorldEnvironmentDay, I’m committed to composting waste. What will you do?”

Air pollution is the silent killer, causing 7 million premature deaths every year. Globally, an estimated 40 % of waste is openly burned. To #BeatAirPollution with @UNEnvironment for #WorldEnvironmentDay, I’m committed to composting waste. What will you do? pic.twitter.com/V25zm9hf7R

The impact of waste burning can be seen on rise in air pollution and poor air quality even in the mountains. Highlighting the same, the actor urged everyone to start managing waste at home by the way of segregation and composting. She added, ‘Stop anyone you see burning waste!’

#AirPollution is a serious threat to health. We need to act NOW to #BeatAirPollution. Stop anyone you see burning waste! Start managing waste at home by segregation and composting. I have. You can! @UNinIndia @UNEnvironment @moefcc pic.twitter.com/AOSfWB5bzM

14 of the 20 most polluted cities are in India. I am committed to #BeatAirPollution by (planting more trees) (composting waste). What will you do? i challenge @IamKirtiKulhari @ImRaina @authoramish to do the same #WorldEnvironmentDay @UNEnvironment pic.twitter.com/xyZ1gtNVlW

Bollywood actor Kalki Kanmani too pledged to contribute to reducing air pollution by shifting to a more sustainable mode of transport and saving greenery.

"Clean air belongs to all of us & there are so many solutions if we ask for them." From shifting to a more sustainable mode of transport ???? to saving our greenery ????, @kalkikanmani has taken her #WorldEnvironmentDay pledge to #BeatAirPollution – have you? https://t.co/OuDwA2X7WV pic.twitter.com/SjmPLtSlR4

Every minute, 13 people in the world die before their time, because of air pollution.

Keeping in mind the vehicular emissions that lead to nearly 4,00,000 premature deaths, a twitterati committed to using public transport, car sharing, cycle or walk to wherever and whenever possible.

Nine out of ten people breathe polluted air. Transport emissions have been linked to nearly 400,000 premature deaths. To beat #BeatAirPollution with UN Environment for #WorldEnvironmentDay, I’m committed to use public transport or car sharing, cycle or walk whenever I can and to pic.twitter.com/inz0Ynfg4H

Erik Solheim, former Executive Director of the United Nations Environment Programme, pledged to use public transport for clean air. He said, “Clean air is possible! Air pollution can be prevented! World Environment Day 2019 June 5th will inspire action to clean the air we breathe. From clean commute to planting trees. Solutions are here! I pledge to use public transport.”

Clean air is possible!
Air pollution can be prevented!
World Environment Day 2019 June 5th will inspire action to clean the air we breathe. From clean commute to planting trees. Solutions are here!
I pledge to use public transport and challenge @AfrozShah1@LewisPugh@Lan_Marie pic.twitter.com/pp4uMjqi5q

Also Read: World Environment Day: Bollywood Comes Together And Asks People To Beat Air Pollution By Being Part Of The Solutions

World Environment Day: Bollywood Comes Together And Asks People To Beat Air Pollution By Being Part Of The Solutions