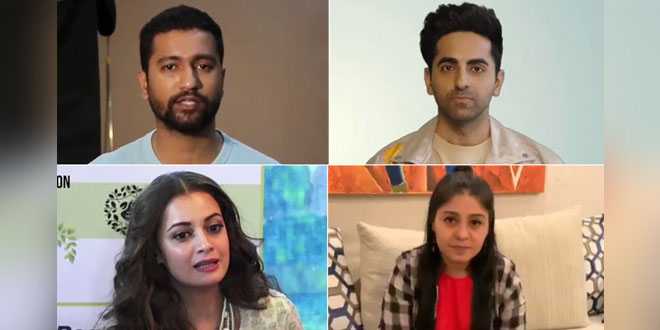 New Delhi: Air pollution kills 1.2 million Indians a year, it is the third biggest cause of death in India, states the study titled ‘State of Global Air 2019’. Not just that, it also reported that life on average of a South Asian child growing up in current high levels of air pollution will be shortened by two years and six months, while the global life expectancy loss is 20 months. Keeping these grim statistics in mind, on this World Environment Day, which will be celebrated worldwide on June 5, the theme has been kept as Beat Air Pollution, with an aim to encourage discussions and solutions around the topic globally.

Bollywood too has joined in and lent its support by asking citizens to be mindful of their actions and help save the planet. Through video messages the actors have posted their plea on social media, Actor Ayushmann Khurrana said,

Proud to be associated with the global campaign against #AirPollution on this #WorldEnvironmentDay. Let’s all come together and try doing our bit by doing carpools, making sure that we use more of public transport and while buying electronics looking at the energy star ratings. The change begin with us, let’s be a part of the solution and not pollution! Together we can bring in the change.

Also Read: This World Environment Day, Pledge To Reduce Your Carbon Footprint. Here Are Some Tips To Get You Started

Proud to be associated with the global campaign against #AirPollution #WorldEnvironmentDay. Be a part of the solution and not Pollution! Together we can bring in Change. #BeatAirPollution by @moefcc @UNinIndia @PMOIndia @narendramodi @PrakashJavdekar @akshaykumar @Asifbhamlaa pic.twitter.com/LmnuwEyZFz

9 out of 10 people worldwide breath polluted air, which increases the risk of cancer, heart disease, and respiratory illnesses. The worrisome part is that India houses 7 of the world’s most polluted cities. Clean air is the basic human right, so, this World Environment Day, show your support and make a pledge for a cleaner and greener environment.

Happy and honoured to be a voice for @UNinIndia @moefcc and @bhamlafoundatio in spreading awareness regarding air pollution. This #WorldEnvironmentDay let's pledge to make a difference. https://t.co/elISY8xClD

For children, Air Pollution is degenerative, it affects their mental health and physical health. It is very important to worry about the air pollution crisis and find measures to beat Air Pollution. We say that the government must do something, yes, it is important, but, it is equally important on how you and I together can also help solve this crisis. There are plenty of things each one of us can do, so, on this environment day, let’s all come together and do our bit to curb air pollution.

9 out of 10 people are breathing polluted air;

There is a lot each one of us can do to reduce this,

We all have the power to make better choices.

Singer Sunidhi Chauhan has also shared her thoughts on the crisis of air pollution and has urged people to come forward and start taking actions. She added,

Clean Air is our right! Dangerous levels of pollution claim more life as compared to other diseases, soon our future will see people struggling for cleaner air. And before we hit that stage we all must come together and take appropriate measures.

Happy to be a part of a global campaign against #AirPollution on the evening of world environment day,rehearsing a musical campaign to #BeatAirPollution by @Moef&cc @UNinindia @Asifbhamlaa #BhamlaFoundation #HAWAAAANEDE pic.twitter.com/DU0jMgybjI

Also Read: World Environment Day 2019 To Be Celebrated On June 5 With Beat Air Pollution As The Call To Action