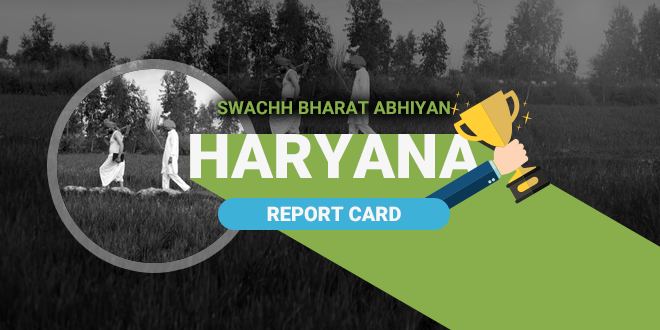 June was indeed a Swachh month for the government as rural areas of Haryana and Uttarakhand were declared open defecation free (ODF). From observing a ‘no toilet, no bride’ policy, holding swachhta competitions among the villages to establishing an anti-open defecation squad in every village, Swachh Bharat Mission-Gramin (SBM-G) officials left no stone unturned to end the traditional practice of open defecation in rural Haryana. Inspired by the zeal and efforts of rural areas, the urban regions have launched an aggressive battle on open defecation in urban Haryana. In a programme with experts from World Bank in April, Chief Minister Manohar Lal Khattar had set the deadline of September end to achieve 100 per cent toilet coverage in urban areas.

Considered as one of the most populous and wealthiest state of India, Haryana has a total of 80 Urban Local Bodies (ULBs) of which 14 have already undergone a third party verification by the Quality Council Of India (QCI) and have been declared ODF. With 16.25 per cent of urban households having access to toilets, ULBs including Thanesar, Sirsa, Panipat, Ratia, Fatehbad, Ladwa and Karnal have attained the ODF mark. While 34 self-declared ULBs are awaiting a confirmation from the QCI, 32 ULBs are in their first party verification i.e. inter-district stage an official from Swachh Bharat Mission-Urban (SBM-U) tells NDTV. Talking about the target deadline he says, “Though we plan to make all the ULBs ODF by September 25, an official announcement is likely to take place on October 2.”

During a review meeting led by Urban Development Secretary Rajiv Gauba with Haryana Chief Secretary DS Dhesi it was announced that over one lakh applications were received for individual household toilets from the ULBs. As per the latest statistics on the SBM-U portal, more than 24,000 toilets have been constructed. And of the 5,399 applications received for community or public toilet, nearly 3,000 toilets have been built.

In the recent Swachh Survekshan, the city of Karnal, which was declared ODF on September 13, emerged as the cleanest city in north zone and got an overall ranking of 65. E-toilets were termed as an ‘admirable initiative’ in the cleanliness survey. The Karnal Municipal Corporation took the hard route and first turned areas, highly vulnerable to open defecation, (like railway tracks, slums) ODF. Apart from the government appointed volunteers, the officials personally visited these areas and made people aware about the ill-effects of open defecation. About 600 families residing in slums were given access to mobile toilets. 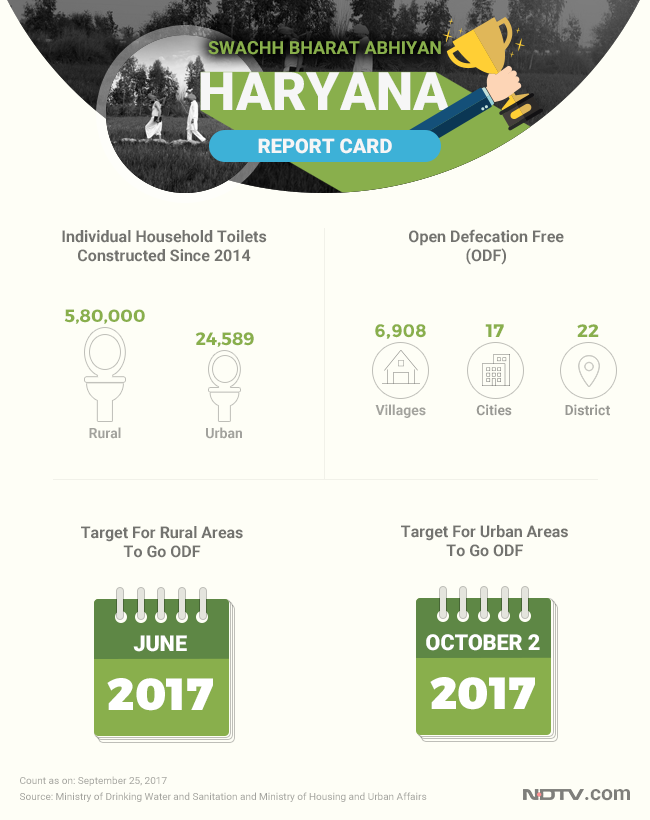 Rural Haryana Declared ODF, What Next?

With construction of 5,80,000 toilets in 22 districts of the state, since the launch of Swachh Bharat Abhiyan in 2014, rural Haryana has achieved the mark 100 per cent toilet coverage. After attaining the crown of ODF in June, it immediately began the process of ODF plus which refers to total sanitation in terms of solid waste management, improved sewerage lines, storm water drains and pucca cement roads. Sustainability and maintaining the ODF status is a huge challenge in rural areas says Rajendra Mehta, Co-Ordinator of Swachh Bharat Mission-Gramin (SBM-G) (Haryana).

Constructing toilets in every household isn’t a parameter to confirm that open defecation has been eradicated. We have to ensure that water is adequately supplied in toilets and people use it everyday.

Household pipelines in many rural areas cannot be connected to sewage, either due to financial crunch or lack of space. Hence we are urging every village to construct an individual household or community soak pit that absorb effluents from the grey water without contaminating the groundwater, says Mr Mehta.

While the district of Panipat has already applied for an ODF plus status with each of the 1,21,876 households equipped with a toilet, soak pit and practising waste segregation. It has been given the tag of model district and an action plan adopted by Panipat has been sent across to all the other districts. Just like ODF verification process, the ODF plus status is achieved after three step verification process. It’ll take a while before all the districts self-declare themselves ODF plus as per Mr Mehta.

Unlike the ODF process, finance is a major challenge in the road to ODF plus mark, “Mindset change is less of an issue now. ODF plus is costly affair for the civic bodies and the government. We have requested several organisations to fund the process through CSR activities,” explains Mr Mehta.