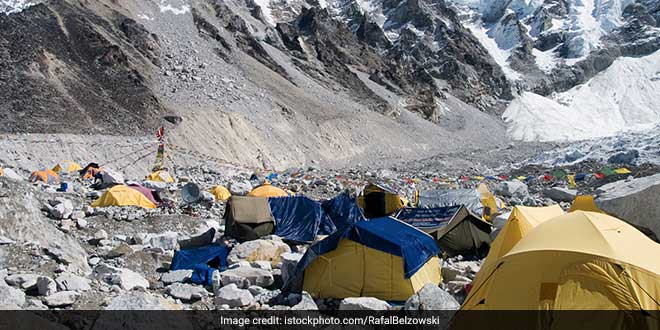 New Delhi: “The total volume of garbage collected by us and produced by the climbers has come up to 13 tonnes,” Pema Tinley, deputy director of the Tibet Mountaineering Association (TMA), told Xinhua news agency. As the climbing season for Mount Everest concluded towards the end of May, the TMA, which administers all climbing activities on the China side of the mountain, is in the process of segregating the garbage collected from the world’s highest range.

Even though more people visit the mountain from the southern side in Nepal, over the past years, numbers have been rising steadily on the Chinese side as well. The TMA making most of the climbing season, divided the climbers into nine teams who collected the rubbish from Mount Everest during their trek. Mr. Tinley further explained how they are managing the waste collected,

The waste we collect from the Mount Everest is generally classified into domestic waste and mountaineering garbage. We had prepared different containers for various types of waste before the climbing season began.

At the base camp of 5,200 metre, each waste category is placed into separate drums that the association gave out to all nine teams registered to climb from the north side this year. Explaining further about the waste drums, Mr. Tinley said,

Those drums were bought from Nepal. They are specially designed for the extreme weather here in the Himalayas, and are solid enough to withstand the low temperatures.

We went to each team every day to see if they were sorting garbage as we required, and sometimes we went up to the camps at 5,800 and 6,500 metres. Garbage-sorting needed to be implemented for effective waste management.

Eco-friendly toilets were installed at the camp at 7,028 metres this year and climbers were asked to put their waste into a barrel, with rubbish bags underneath the toilet. Similar facilities were also installed in camps at 5,200 metres, 5,800 metre and 6,500 metres, which were all removed as the climbing season ended.

As for mountaineering waste, which includes used tents, ropes, oxygen bottles and batteries, climbing guides would also get paid if they brought such waste down from above 7,028 metres, where the villagers were not able to go.

Used climbing gear is of great value if we use it in the right way, tents and oxygen bottles can be used again, said Dechen Udrup, adding that a program aimed at recycling mountaineering waste had been set up in Lhasa, and artists had been invited to design artworks out of it.