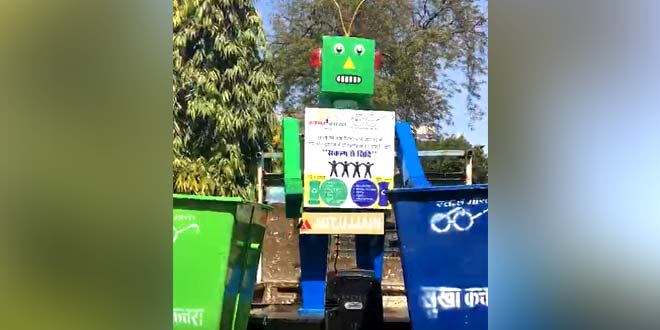 New Delhi: From initiating a Swachh Cycle Rally to building bio-toilets, from converting garbage to compost to beautifying the walls, Ujjain Municipal Corporation is going all out to the Swachh Survekshan 2018. Now, Ujjian Municipal Corporation has collaborated with Mahakal Group of Technologies (MIT) to spread the message of cleanliness with the help of country’s first Cleanliness Awareness Robot – ‘CLEAN O’. The reason behind roping in a robot is to spread the message and urge citizens to give adequate feedback is that Swachh Survekshan 2018 is underway and citizen feedback has been given 35% weightage.

The CLEAN O robot will visit all the 54 wards of the city and give a message on cleanliness. In addition to this, the robot will question the citizens and take their feedback just like the survekshan team. Some of the questions to be asked are, “In comparison to last year, how clean is your city?”, “Are you satisfied with the facility provided for waste segregation?” Along with this, the robot will give a lesson on waste segregation as well.

Citizens have bent backwards to ensure Ujjain improves its ranking and attain the title of India’s Cleanest City. This year, citizen feedback has been given 35% weightage. Citizens need to be aware what type of questions will be asked and how are they supposed to respond. Many a times, some people get confused and are unable to answer properly. In order to avoid this situation, we are teaching and training citizens via robot, says Mr Vijay Kumar.

Last month, Municipal Commissioner Vijay Kumar J kick started a ‘Swachh Cycle Rally’ to understand the level of sanitation and hygiene in Ujjain and propagate the message of Swachh Bharat. As part of the rally, the Municipal Commissioner along with other officials cycle to different wards to take a stock of cleanliness and sanitation. In addition to this, they interact with the citizens to understand their problems.

Also Read: #UjjainBanegaNo1: Here Is What Fifth Largest City In Madhya Pradesh Is Doing To Be On Number 1 In Swachh Survekshan 2018

Tying The Knot In Indore? Here Is The Civic Body’s Gift For A Swachh Marital Life