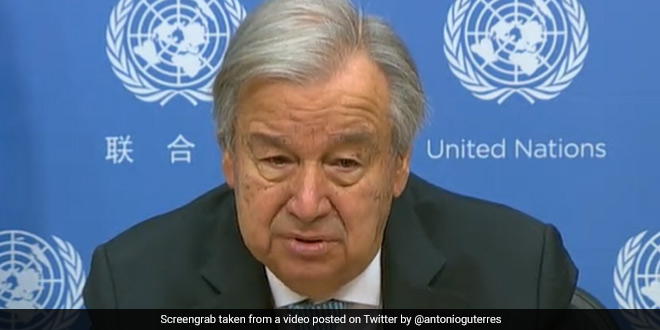 The emissions gap is the result of a leadership gap: UN Secretary-General Antonio Guterres

New York: UN Secretary-General Antonio Guterres on Tuesday (October 26) stressed the need to close the “leadership gap” in climate action before the UN Climate Change Conference in Glasgow, Scotland. He made the plea at the launch of the UN Environment Programme’s Emissions Gap Report 2021, entitled “The Heat Is On.” The report shows that with the present Nationally Determined Contributions and other firm commitments of countries around the world, the world is on track for a catastrophic global temperature rise of around 2.7 degrees Celsius above pre-industrial levels, he said.

As the title of this year’s report puts it: ‘The heat is on.’ And as the contents of the report show: the leadership we need is off. Far off. The clock is ticking. The emissions gap is the result of a leadership gap. But leaders can still make this a turning point to a greener future instead of a tipping point to climate catastrophe, he said.

Climate change is truly an existential crisis that threatens not only us, but succeeding generations.

There is one path forward.

A 1.5 degree future is the only livable future for humanity.

Today at #UNGA, I urged leaders to get on with the job, before it’s too late. pic.twitter.com/k729712t9F

“The era of half measures and hollow promises must end. The time for closing the leadership gap must begin in Glasgow.”

As world leaders prepare for Glasgow, this report is another thundering wake-up call. Unless global carbon emissions are reduced by 45 per cent from 2010 levels by 2030, the Paris Agreement goal of temperature rise of 1.5 degrees will not be obtained, he said. Scientists are clear on the facts. Now leaders need to be just as clear in their actions. They need to come to Glasgow with bold, time-bound, front-loaded plans to reach net-zero emissions, he said.

One week before #COP26, we were still on track for a catastrophic global temperature rise of around 2.7 degrees Celsius.

Scientists are clear on the facts.

Leaders need to be just as clear in their plans to avoid climate catastrophe. pic.twitter.com/EpGuuOd4YL