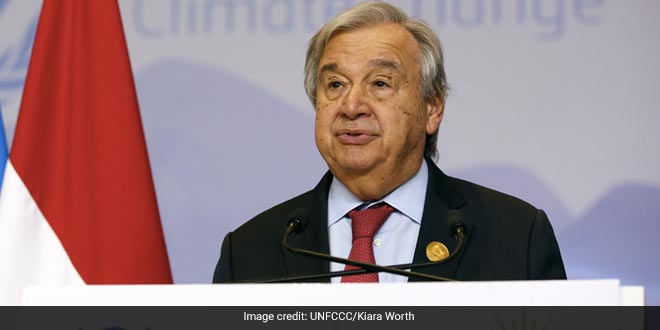 Sharm El-Sheikh: United Nations Secretary-General Antonio Guterres welcomed the decision to establish a “loss and damage fund.” In a video message to the 27th Meeting of the Conference of Parties to the UN Framework Convention on Climate Change, Mr Guterres called the creation of a “loss and damage fund” an “important step” towards justice. Mr Guterres stressed that the decision will not be enough but noted that it is a “much-needed political signal to rebuild broken trust.” In his remarks, he expressed gratitude to the Egyptian government and COP27 President Sameh Shoukry for their hospitality. In the statement, he appreciated the delegates and members of civil society who came to Sharm el-Sheikh to push leaders for climate action.

The conference has taken an important step towards justice. I welcome the decision to establish a loss and damage fund and to operationalize it in the coming period.

Clearly this will not be enough, but it is a much-needed political signal to rebuild broken trust.

Antonio Guterres stressed that climate chaos is a “crisis of biblical proportions.” He emphasised that the conference has been driven by two themes – ‘justice and ambition.’ He stated that the voices of those on the front lines need to be heard.

Expressing concern over the climate situation, Guterres said that our planet Earth continues to remain in the “emergency room.” He called for a reduction of emissions and emphasised that the issue was not addressed by the COP. He said that the world still requires a “giant leap” in climate ambition.

Antonio Guterres said in the remarks,

“Our planet is still in the emergency room. We need to drastically reduce emissions now and this is an issue this COP did not address,” he added.

Confirming the agreement for creating a “Loss and Damage Fund,” the COP27 in a tweet said, “History was made today at #COP27 in Sharm El-Sheikh as parties agreed to the establishment of a long-awaited loss and damage fund for assisting developing countries that are particularly vulnerable to the adverse effects of climate change.”

COP27 President Sameh Shoukry said, “I invite the CMA to adopt the draft decision of title funding arrangements for responding to loss and damage associated with the adverse effects of climate change, including the focus on addressing loss and damage contained in the document FCCC/CP/2022/L18FCCC/PA/CMA/2022L20. There are no objects. It is so decided.”

The 27th UN Climate Change Conference was scheduled to end on Friday. However, it has been extended by a day. On Friday, the Egyptian Presidency called on negotiators to “shift gears” in order to reach an agreement on the remaining sticking points.