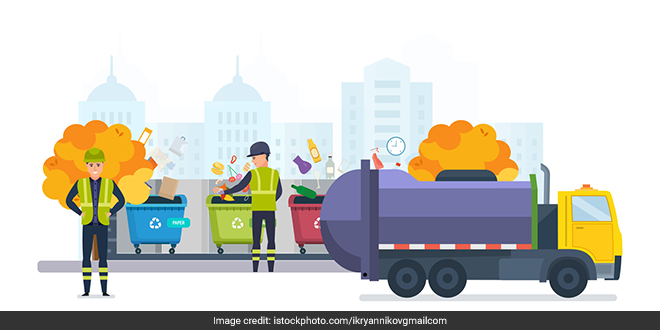 New Delhi: Spread over 135 acres with 900 homes and 16 community parks is Nirvana Country, a housing society in Haryana’s Gurugram (erstwhile Gurgaon). In the last seven years, the Nirvana Country has kept thousands of kilos of waste away from landfills. It all started in 2015 when Nirvana Country decided to manage their waste at source. This is when the government norms on solid waste management were not strictly implemented. Ashish Agarwal, President, Resident Welfare Association, Nirvana Country says, “We realised, as a community we should be concerned about our waste going to the landfills.” And that’s how they set on a journey of waste management by segregating waste at source.

We segregate waste into three categories. The first is green waste that includes kitchen waste. It is composted within the society premises and used in our 16 parks. The second category is of recyclable waste. This is typically the stuff that you would give to a Kabadiwala (waste dealer) like cardboard boxes and metal. The third category is of sanitary or hazardous waste. The waste is collected from the doorstep in segregated manner. Apart from this, we also have a weekly collection of low value plastic which goes for recycling; e-waste and glass waste is also collected regularly.

What helped the Nirvana country in managing its waste was segregation at source, something that was mandated in 2016, after Solid Waste Management Rules came into existence.

On April 8, 2016 the Ministry Of Environment, Forest and Climate Change notified the Solid Waste Management Rules 2016 to lay a solid framework for scientific waste management of waste across urban settlements. The SWM Rules 2016 replaced the Municipal Solid Wastes (Management and Handling) Rules, 2000, which had been in place for the past 16 years. These rules are the sixth category of waste management rules brought out by the ministry. The other five categories are plastic, e-waste, bio-medical, hazardous, and construction and demolition waste management rules.

SWM rules are applicable beyond municipal areas and include urban agglomerations, census towns, notified areas and industrial townships, areas under the control of Indian Railways, airports, airbases, Ports and harbours, defence establishments, state and Central government organisations, special economic zones, places of pilgrims, among others. This is the reason the word ‘municipal’ has been omitted.

The waste generators who are to abide by these rules include:

– Gated community having an area of more than 5000 square metre

What Are The Key Duties Of Waste Generators?

Also Read: A Road To Garbage-Free City: How Can Cities Manage Their Waste In A Sustainable Manner

– All Resident Welfare and Market Associations, gated communities and institutions with an area of more than 5,000 square metre and all hotels and restaurants are responsible for segregating waste at the source and facilitating the collection of segregated waste in separate streams. While recyclable material needs to be given to either the authorised waste pickers or recyclers, the bio‐degradable waste shall be processed, treated and disposed of through composting or bio‐methanation (converting organic waste into biogas) within the premises as far as possible. The waste generators in this category can give residual waste to the waste collectors.

Collection And Disposal Of Sanitary Waste

Sanitary waste includes diapers, sanitary pads, tampons, and condoms. As per the rules, manufacturers of sanitary napkins and diapers shall explore the possibility of using all recyclable materials in their products or they shall provide a pouch or wrapper for disposal of each napkin or diaper along with the packet of their sanitary products. Along with this, brand owners shall educate the masses on the wrapping and disposal of their products.

For people using sanitary products, SWM Rules, 2016 advise securely wrapping the used product and putting it under the non-biodegradable category.

The rules call to set-up material recovery facilities or secondary storage facilities where non-compostable solid waste can be temporarily stored to facilitate segregation, sorting and recovery of recyclable products. Recyclables include paper, plastic, metal, glass, textile and others.

For this, the SWM rules recommend leveraging the strength of the informal sector of waste pickers and recyclers who are involved in sorting, selling and purchase of recyclable materials. Through this provision, the aim was to make rag pickers and waste dealers or Kabadiwalas, part of the formal system.

Also Read: What Indore, The Cleanest City Of India For 5 Years In A Row, Did Right And How Other Cities Can Go Zero Waste Too?

For the management of non‐recyclable waste having calorific value (amount of heat or energy produced when waste is burnt) of 1500 K/cal/kg or more, SWM Rules advise against disposing it on landfills. Instead, such kind of waste should be utilised for generating energy, or by giving away as feedstock for preparing refuse derived fuel. It can also be used for co-processing in cement or thermal power plants.

– setting up solid waste processing facilities by all local bodies having a population of 1 lakh or more within two years.

– bio‐remediation or capping of old and abandoned dumpsites within five years. Bio-remediation or capping involves treating organic waste and spreading the remaining waste uniformly, over the land. It is then covered with a geo-textile layer, a geo-membrane and one-metre of soil so that grass can be grown on it.

Waste generators will have to pay a user fee to waste collectors or local bodies for solid waste collection, transportation, processing and disposal services. The local authorities can decide the user fee and also spot fine for people who litter or fail to comply with the Solid Waste Management Rules 2016.

SWM Rules 2016 introduced ‘extended producer responsibility’ and made producers of packaging products such as plastic, tin, glass and corrugated boxes responsible for their environmentally sound management.

All such brand owners who sell or market their products in non-biodegradable packaging material have to put in place a system to collect back the packaging waste generated due to their production.

The Roadblocks In Effective Implementation Of SWM Rules 2016

It has been six years since SWM Rules 2016 came into existence and even today, the effective implementation of these rules appear like a far-fetched dream. For instance, bio-remediation or capping of old and abandoned dumpsites had to be done within five years but mountains of garbage can be seen in the national capital Delhi. In fact, India’s oldest and largest dumping ground – Deonar in Mumbai – which started in 1927 is still operational.

When asked about the reason behind the poor implementation of SWM Rules 2016, Swati Sambyal, Independent Waste and Circular Economy Expert said,

The implementation of these rules has been lagging across cities in the country. It depends a lot upon the political will, the administrative will and also whether you have been able to stitch together various stakeholders, especially citizens to a waste management system that you set up for a city.

There are multiple challenges, starting from the capacities of urban local body officials to skilled officers who can handle this environmental engineering subject effectively. Each city needs a dedicated solid waste management cell with appropriately qualified and trained professionals who come with varied backgrounds ranging from social works, science, engineering, and public health. Waste management audits to understand the challenges in the implementation of SWM Rules are equally important, for the administration to take appropriate corrective actions.

All the experts, team Banega Swasth India interviewed, said the key to addressing India’s waste challenges is source segregation. Without that, everything that follows will fail. For instance, to function well, even a waste-to-energy plant requires segregated waste. Ms Sambyal adds,

Segregation at the source is the first step. However, we also need to ensure that there are systems to collect segregated waste. People might be segregating at the source but if that waste gets mixed up during collection or secondary transportation, then all the efforts become futile.

We need to understand, that we cannot get rid of waste or landfills until and unless we start source segregation, which is also one of the mandates and one of the first rules of solid waste management rules. A landfill will still be required but firstly, we need to build it in a scientific way and secondly, only inert waste should go to landfills. Even in the waste management pyramid, the top options are reusing and recycling. Landfills and waste-to-energy plants are the last options.

Also Read: Heroes Of Swachh India: Story Of A Delhi NGO ‘Gulmeher’ That Has Transformed The Lives Of Women From Ghazipur Landfill Area

Sexual Contact Not The Only Cause For Monkeypox: WHO Chief Scientist

What Indore, The Cleanest City Of India For 5 Years In A Row, Did Right And How Other Cities Can Go Zero Waste Too?