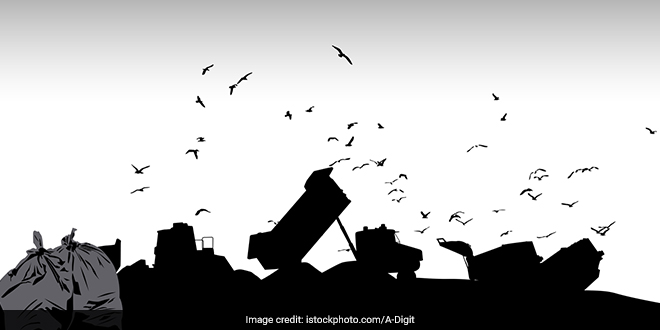 Swachh Bharat Mission: 341 landfills are in operation in India

New Delhi: In the national capital Delhi, around 13 km away from the India Gate, there stands a 65 metres (213 feet) tall mountain, a mountain of garbage in the Ghazipur area. The height of the waste accumulated at the Ghazipur landfill is just eight metres short of the iconic Qutub Minar, which is 73 metres high. The landfill site, commissioned in 1984 and overflowing since 2002, exceeded its capacity two decades ago but garbage continues to get dumped here. This is not the story of Ghazipur alone. There are two more such landfills in Delhi and in other cities as well.

Interestingly, these sites – Ghazipur, Okhla, and Bhalswa – are actually dumpsites and not sanitary landfills. What is the difference? Well, a sanitary landfill or a scientifically developed landfill is designed to take in only residual solid waste and inert waste. Elaborating on the same, Subhasish Parida, Programme Manager, Centre for Science and Environment said,

A scientific landfill needs to have a gas collection system because some organic materials may also come to the landfill along with inert material which has the potential to generate methane gas. There has to be a system to collect and treat leachate (water that has percolated through a solid and leached out some of the constituents). The municipal corporation has to monitor ground water, surface water, and ambient air, ensuring the landfill is not causing any kind of pollution.

Why Open Dumping Of Waste Is A Health Hazard

A dump site is essentially a piece of land utilised by a local body for the disposal of solid waste without following the principles of sanitary land filling. Talking specifically about Delhi, Richa Singh, Landfill expert from the Centre for Science and Environment said,

These landfills are just a piece of land used for dumping waste as a result there is no barrier layer at the bottom, no facility to treat the hazardous liquid that is generated because of the waste and also gases which are emitted from the landfill. During this entire process of dumping the waste, there is a lot of leachate that is produced, along with a lot of gasses such as H2S gas (Hydrogen Sulfide or sewer gas), which is carcinogenic in nature, and the methane gas, which has huge global warming potential.

Ideally, there has to be a system to collect leachate and flare the methane gas into the air so that the landfill does not catch fire. However, that does not seem to be the case with landfills in Delhi at least. Further elaborating on the impact of dumpsites being used as a landfill, Ms Singh added,

The people who are living in the close proximity of 5 km, they are exposed to a lot of different types of contamination. As we, all know that the ground water is the actual source of drinking water, now even if you do not use that water for drinking purposes then people living near the vicinity use it for bathing and cleaning their utensils. As a result, they are exposed to developing many acute and chronic diseases.

Are Sanitary Landfills A Good Option To Manage Waste?

Sourabh Manuja, a Delhi-based waste management specialist believes that scientific landfills are not bad. He says,

Scientific landfills just occupy useful spaces and are examples of a linear economy concept. Scientific landfills are capsulated buckets that contain waste, we capture landfill gas and utilise it, collect leachate and treat it and of course, when it gets filled up these have to be scientifically closed, capped and monitored. In long run, these are way more expensive than processing of waste.

The problem of waste in India is huge. With the increasing population, the amount of waste generated every day is bound to increase. Increasing the number of landfills and throwing waste there is not a solution as landfills can take in a limited amount of waste. Unless, we want a situation like Delhi where Ghazipur landfill often catches fire, acting as a health hazard for the people living in the vicinity and an environmental hazard as well. So, what is the solution? Waste segregation at source. Poor segregation at source due to either lack of interest of people and corporations and/or lack of resources acts as a hurdle in waste management. Explaining how it can help in waste management, Mr Manuja said,

Generators should segregate waste at the source; collect and take dry waste to material recovery facilities, where these get sorted and sold out. Wet waste enters into processing facility to generate biogas or compost. The outputs are sold out to market, to recover a portion of the operational costs. Only processing rejects and inerts get disposed into scientifically built and operated cells (landfills). Remember, you can’t operate a processing facility without linking the rejects appropriately.

Swati Sambyal, Independent Waste and Circular Economy Expert resonated with Mr Manuja’s views and emphasise on the waste segregation at source, which is mandated by law under SWM Rules 2016. Ms Sambyal also stressed upon reducing the waste at source and taking care of one’s waste like composting wet waste at source.

Many cities are also resorting to waste-to-energy plants – waste management facility that burns waste to produce electricity. Currently, 11 waste-to-energy plants are operational in India. But, to function well, these plants require segregated waste and even then, they don’t produce enough energy. Chitra Mukherjee, Consultant, Waste and Sustainable Livelihood believes that it is time we should move from installing WTE plants and creating landfills to focus on decentralised management that is local management of waste. Ms Mukherjee said,

Whether it is the household, colony, market, or office – the waste they are producing should be managed at the source by them and we should not be thinking of outdated technologies. We should rely on our waste pickers for waste segregation, and opt for options like recycling and reusing.

Five Things To Know About Monkeypox