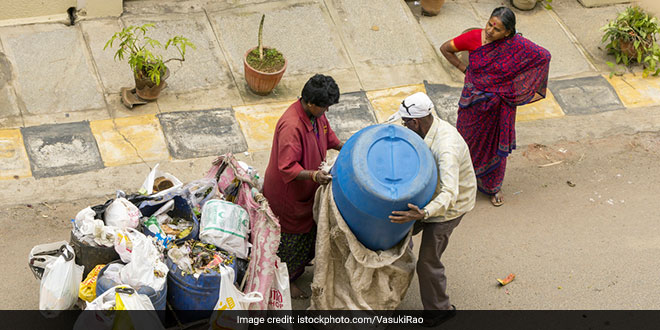 New Delhi: In 2016, the Ministry of Environment, Forests and Climate Change (MoEF&CC) notified the new Solid Waste Management Rules (SWM), 2016 that replaced the Municipal Solid Waste (Management and Handling) Rules, 2000. After 16 years, the waste management rules were changed in India and were made applicable beyond municipal areas to include urban agglomerations, census towns, areas under the control of Indian Railways, airports, airbases, Ports and harbours, defence establishments, special economic zones, places of pilgrims, among others. Why? To manage the humongous amount of solid waste being generated in the country.

What Is Solid Waste?

Municipal areas in India generate over 1.60 lakh (1,60,038.9) tonnes of solid waste per day, as per the annual report (2020-21) on Implementation of Solid Waste Management Rules, 2016 by the Central Pollution Control Board (CPCB).

As per the CPCB, 50,655.4 TPD that is 31.7 per cent of the total waste generated remains un-accounted which means the waste is disposed of unscientifically. Chitra Mukherjee, Consultant, Waste and Sustainable Livelihood says,

The waste dumped openly and not collected makes for unaccounted waste.

Among all the states and Union Territories (UTs), Maharashtra generates the maximum amount of solid waste that is 22,632.71 TPD, followed by Uttar Pradesh generating 14,710 TPD and West Bengal (13,709 TPD).

Lakshadweep generates only 35 TPD of waste that could also be because of the population size of the UT, followed by Sikkim generating 71.9 TPD and Andaman and Nicobar Islands 89 TPD.

As per the CPCB data, Chhattisgarh is the only state that collects and treats the entire waste generated which is 1,650 TPD. No waste is sent to landfill.

The Composition Of Municipal Solid Waste

As per the operational guidelines of Swachh Bharat Mission – Urban 2.0, published by the Ministry of Housing and Urban Affairs in October 21, the composition of municipal solid waste in India is as follows:

“Sanitary land filling” means the final and safe disposal of residual solid waste and inert wastes on land. Inert waste is something that is not bio-degradable, recyclable or combustible street sweeping or dust and silt removed from the surface drains.

Currently, the maximum numbers of landfill sites in operation are in Maharashtra (137), Karnataka (52) and Uttar Pradesh (86).

On the other hand, a dump site is essentially a piece of land utilised by a local body for the disposal of solid waste without following the principles of sanitary land filling. Dumpsites are in a way a temporary solution to dump waste. There are 3,184 dumpsites in the country. While 234 dumpsites have been reclaimed, meaning the land has been recovered by clearing up of waste, 8 have been converted into landfills – 3 dumpsites have been converted to landfills in Andhra Pradesh and one each in Meghalaya, Rajasthan, Sikkim, Telangana and Chandigarh.

In 2017, ASSOCHAM along with accounting firm PwC published a report titled “Waste Management in India – Shifting Gears”. The report explorated the CPCB data and noted that in 2011, 62.05 million metric tonnes of solid waste was generated. Based on that, it made some predictions on the growth in waste generation and treatment.

It is estimated that by 2050, 50 per cent of the population will be living in urban areas, and the volume of waste generation will grow by 5 per cent per year. Accordingly, the expected waste quantity we are looking at for the year 2021, 2031, and 2050 are 101 million metric tonnes per year, 164 million metric tonnes, and 436 million metric tonnes per year respectively. This will require significant land area to be put under landfilling. If the present scenario of waste management is considered, where most of the waste is dumped without treatment, we are actually looking at an estimated 88 square km (equivalent to the size of the New Delhi Municipal Council area) of precious land being brought under waste disposal through landfilling.

Imagine a landfill equivalent to the size of a city! India’s humongous solid waste is a ticking time bomb and it is about time we defuse it before it blasts.

To know why landfills are a huge problem and how can India manage its waste better, read the second part of the story here.

Solid Waste Management In India: The Challenge Of Growing Mountains Of Garbage – Landfills