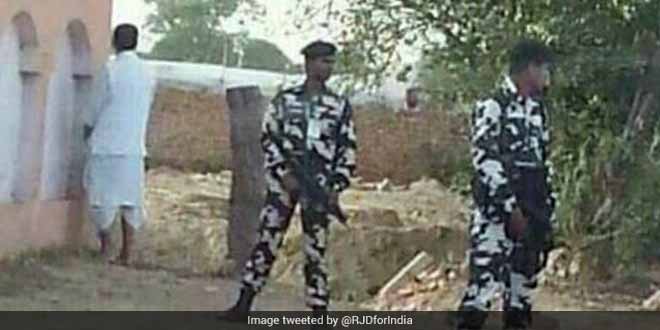 A picture of Union Minister Radha Mohan Singh urinating in the open has gone viral, with netizens trolling him on social media and raising questions over the government’s Swachh Bharat Abhiyan. In the picture, Mr Singh is seen urinating against the wall of a building as his security officers stand guarding him. A vehicle with red beacon is also seen in the TV footage aired by some news channels. The picture has drawn sharp criticism for what is being described as ‘blatant violation of Swachh Bharat Abhiyan’ launched by the Prime Minister amid much fanfare. The spot and date on which the photos were taken are not known. The Minister, who was in his native constituency of Motihari in connection with Eid, had left for Delhi on Monday night. The photo could be of this period when Mr Singh attended many functions in his constituency, sources told PTI.

However, the minister defended himself saying, “There was no urinal for long stretches on National Highway 28 in Bihar,” but social media was unforgiving. Several people on Twitter and other social media platforms have reacted to the picture, pointing out that it seems Prime Minister Narendra Modi, who has been quite a vocal supporter of keeping India clean and has received an enthusiastic response from the people, is being let down by his own ministers.

From asking the minister to be ‘peenalised’ to hailing him as the true ambassador of Swachh Bharat Abhiyan and a ‘VIPee’, people took a jibe at Minister on social media. Other opposition parties, too, criticised the Minister

His son and Bihar’s Deputy Chief Minister Tejaswi Yadav posted the controversial photo to draw attention to the red beacon on the car near him, saying ‘search red beacon in the photo’.

JD (U) Secretary General and Chief national spokesperson KC Tyagi told PTI over phone, “The Minister is exposing hollowness of Swachhta Abhiyan launched by the Prime Minister from the ramparts of Red Fort.”

However, in Motihari, his kins, were critical of the media for airing such footage. “Urination is a natural biological urge of a human being, so why such things are highlighted to create controversy, are urinals available everywhere?” his son-in-law, Sujit Kumar Singh told PTI in Motihari.

Radha Mohan Singh is a fourth-term BJP MP from Motihari in Bihar. The state BJP President, Nityanand Rai refused to comment on the inicident. East Champaran district BJP leader Lal Babu Prasad was also critical of the media and wondered if such things should be shown by media.

Also, it is not for the first time that Union Agriculture Minister Radha Mohan is in news for all the wrong reasons. Even earlier this month, amidst the violent farmers’ protests in Madhya Pradesh, Mr Singh was spotted in Bihar’s Motihari, his hometown and parliamentary constituency, attending a yoga camp led by Ramdev. And when reporters asked him about the protest and to comment on the death of five farmers in police firing, the Minister replied, “Yoga kijiye (practice yoga)”.