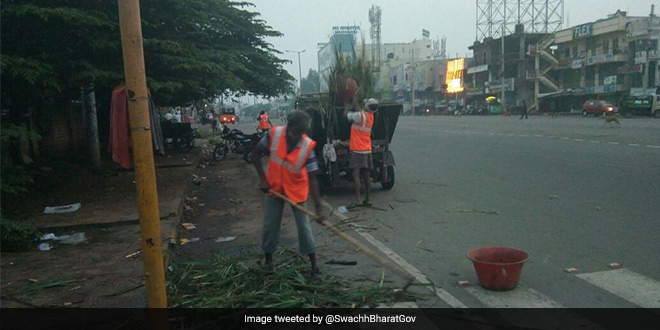 The much awaited festival of lights is over, though the celebrations aren’t. Diwali this year was continuously awaited along with the dread of noise pollution and garbage accumulation. Numerous debates have done the rounds ever since the Supreme Court announced its decision to ban the sale of firecrackers in Delhi-NCR during Diwali. While the ban was enforced on the sales of firecrackers, their bursting was still legal and Diwali 2017 saw firecrackers being burst all over the country. Post Diwali, massive amounts of garbage was seen in streets across all major metros as municipalities have begun to engage in post Diwali cleanup.

We have already disbursed the salary for September and will disburse the bonus soon as well. The mayor has promised them that reasonable demands will be met. Garbage collection will resume as soon as the strike is over, said Ranbir Singh, Commissioner, East Delhi Municipal Corporation.

Mumbai also saw the accumulation of more than usual waste. Sanitation workers assume that the garbage generated on the occasion of Diwali is equal to garbage generated for seven days. Sanitation workers affiliated to the Brihanmumbai Municipal Corporation (BMC) are of the opinion that due to Diwali being followed by an extended weekend, the bursting of crackers and generation of more garbage will only continue. Mumbai did not ban the sale of firecrackers but requested its citizens to opt for a cracker free Diwali.

It is more difficult for us as Diwali is followed by an extended holiday period. We have requested some ward commissioners to extend the garbage cleaning period by two hours so that more garbage can be cleared. But the real picture will only be visible Sunday onwards, said a Brihanmumbai Municipal Corporation spokesperson.

The Pimpri Chinchwad Municipal Corporation in Pune also began its post Diwali cleanup drive early on the morning of October 20.

The Municipal Corporation of Tiruchi has geared itself well to ensure that the post Diwali mess does not pose a problem for the citizens. On October 19, the city generated nearly 50 tonnes of waste more than its usual quota of 380 tonnes daily. Along with 1,500 sanitation workers affiliated to the civic body, 500 people from various NGOs have also been active in clearing the additional garbage generated due to Diwali. The municipal corporation said that nearly 90 per cent of the garbage in the city has been cleared since the noon of October 19.

We knew that burnt firecrackers would comprise most of the extra garbage and hence had appealed to NGOs to come forward in cleaning up the city post Diwali. Most of the garbage has been cleared and the rest will be done by the end of October 20, said Thiru N. Ravichandran, Municipal Commissioner, Tiruchi.

Considering the damage done by Diwali celebrations, especially the waste generated due to bursting of crackers, several other cities also stepped up their efforts to begin cleanup procedures. Greater Visakhapatnam Municipal Corporation began its cleanliness drive early morning on the day after Diwali and cleared the city’s main roads of burnt crackers and empty cracker boxes.

A post Diwali cleanliness drive was carried out by GVMC at several major junctions in #Visakhapatnam #MyCleanIndia pic.twitter.com/3NIlvV0peE

In Tinsukia, Assam, a cleanliness drive was carried out by volunteers who started cleaning the city early in the morning post Diwali. The Guwahati Municipal Corporation also carried out a post Diwali cleanliness campaign in Guwahati, in the wee hours of the morning after Diwali. Leftovers from celebrations were cleared from the main streets of the city and transported to the nearly recycling plants.

A post Diwali special nighttime cleanliness drive was organised by the #Guwahati Municipal Corporation in the city.#MyCleanIndia pic.twitter.com/S426Ei8RWa

Ghaziabad Is All Set For A Swachh Look: The Municipal Corporation Starts Door-To-Door Segregated Waste Collection Process In 65 Wards

Chennai Reels Under Air Pollution On Diwali, As Delhi And Mumbai Fare Better Than Last Year