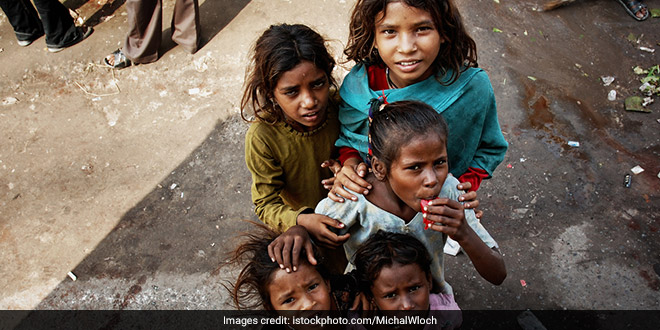 New Delhi: “Healthy children are the foundation of a healthy and strong India…we can all win the war against malnutrition,” said the Uttar Pradesh Chief Minister (CM) Yogi Adityanath. He declared his ‘mission’ to eradicate child malnutrition and improve the health status of the state, on September 1, 2019 which marked the beginning of Poshan Maah or National Nutrition Month celebrations. Less than six months later, disturbing news highlighting the challenge India is up against comes to light from CM Adityanath’s state. A family lost four of its member in the last six years due to malnutrition in state’s Basti district. For a country that is targeting to become malnutrition free by 2022, as declared by Prime Minister Narendra Modi’s while launching the Poshan Abhiyan, which is two years away, this news underlines the ground realities of how deep rooted the problem of malnutrition is.

Following the media reports of the case, the National Human Right’s Commission took suo-moto cognisance of the incident and sent notice to the UP government, an official told NDTV. The notice states, if true, the case is a “serious issue of human rights violation” due to the lack of nutritional diet, adequate medical care and proper means of livelihood.

Such reported tragic deaths, due to malnutrition and lack of other basic facilities are a matter of concern, NHRC wrote in the letter.

After four of his family members died of malnutrition, the head of the family Harishchandra, not being able to bear the extreme physical and mental suffering, has also requested the authorities to allow him to end his life. He says that he is not being given work by anyone for the last three months and has no source of income to procure bread and butter for him and his lone surviving four-year-old daughter Vindhyavasini, who is also struggling to stay alive, the NHRC official told NDTV.

Furthermore, the commission issued the notice to the UP government, through its chief secretary, seeking a detailed report, including the data pertaining to effective implementation of social welfare schemes in the district, he added.

The Commission also has requested details on the present health status of the only girl child of Harishchandra and steps taken to ensure some source of income for him by the state.

Details of the relief provided to the family by the district administration be also informed within four weeks, read the NHRC notice.

In October 2019, a Lancet study by India State-Level Disease Burden Initiative collaborators, led by WHO chief scientist and former Director General, Indian Council of Medical Research, noted that more than 68 per cent of total under-five deaths in UP are due to malnutrition.

The NHRC too, mentioned in the letter that media report indicates that there could be more such families, “shattered due to the lack of infrastructure and negligence by the authorities concerned.”

Such incidents are happening in spite of a large number of the flagship programmes having been announced and their implementation being monitored by the Union and the state governments to ensure socio-economic protection to the citizens, including their right to food, health, education, housing and adequate standard of living. These schemes have been designed and developed to protect the vulnerable sections of the society focusing upon women, pregnant ladies, lactating mothers, newly born and young children, it reads.

Mr Basanta Kumar Kar, the recipient of Global Nutrition Leadership Award and a Transform Nutrition Champion tells NDTV that the deaths need to be investigated by experts.

Life is precious and it is always painful to hear about the deaths due to malnutrition. These deaths need to be investigated by a panel of experts whether the reported deaths are due to malnutrition, prolonged morbidity or other factors like poverty, poor quality of care or neglect. At times, malnutrition becomes an underlying factor for deaths. The panel needs to look into this.

He further said that the Uttar Pradesh is implementing Poshan Abhiyaan which is “shaped by the determination of highest policy and political will.”

The Poshan Abhiyan signals a new era in the human capital development and is bound to change the very landscape of nutrition in India. I am sure, the policy makers and program leaders would take this as a test case and accelerate Jan Andolan to prevent malnutrition and micronutrient deficiencies with a focus on first one thousand days of life to achieve India’s demographic dividend, growth and productivity, he signed off.

Rasoi On Wheels: This Mobile Kitchen Serves Nutritious Food To The Poor In Delhi And Gurugram

Fit India Program: Perform 30 Squats In 180 Seconds To Get A Free Platform Ticket At This Railway Station In Delhi