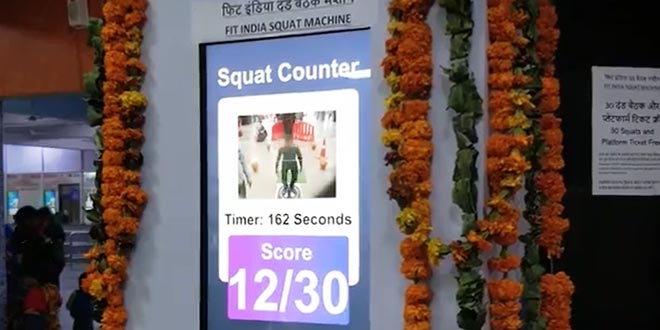 New Delhi: With an aim to promote central government’s ‘Fit India’ campaign, Indian Railways started a new initiative at the Anand Vihar Railway Station in Delhi on Friday. As part of this initiative, a machine has been installed at the station which will give free platform tickets to the people who perform 30 squats in 180 seconds or three minutes. Railway Minister Piyush Goyal shared about the installation of the machine, called as ‘Squat Kiosk’ via his twitter handle. He wrote,

To encourage fit India Program, Indian Railways has installed Squat machine at Anand Vihar Railway Station in Delhi. If you perform 30 squats in180 secs, you are eligible for free platform ticket.

Exercise & Get Free Platform Ticket: Indian Railways has embarked on a novel initiative to encourage fitness at Anand Vihar Railway Station in Delhi.

Platform tickets will be given free of charge to those who exercise using the ‘Squat Kiosk' installed. pic.twitter.com/4DlqDdRATc

If you perform 30 squats in180 secs, you are eligible for free platform ticket pic.twitter.com/tsjV73wzFb

Indian wrestler Geeta Phogat lauded the initiative of the Indian Railways and wrote on the micro-blogging site, twitter,

According to an official from Northern Railways,

The machine has been programmed in such a manner that if you perform 30 squats in180 seconds, you are eligible for free platform ticket. It is a small initiative that we have started to boost the habit of exercise among people. The station gets over a lakh footfall every day and it is encouraging to see that some people actually engage with the machine.

He further said that the ministry may think about installing more squat kiosk after analysing the response received by the current machine. The initiative became an instant hit among the twitterati who call it an unprecedented step undertaken by the government to motivate people especially youngsters to keep themselves active. A Twitter use Abhishek Bhatt wrote,

Very enthusiastic initiative by railways. Government should also focus on those areas where we can innovate such kind of ideas, which will give a good health and clean environment as a byproduct of our daily routine activities.

Another user suggested that the railway ministry should take this intiative to other stations as well.

That's really great offer for us! Thank you @RailMinIndia @RailwaySeva. We wish to have one in #Kalaburagi railway station too.. please do same here.. @Central_Railway @DrmSolapur
Best initiative under #FitIndiaMovement. https://t.co/r4SKJvJWky

Prime Minister Narendra Modi launched a nation-wide initiative called Fit India Movement in August last year with an aim to encourage people to inculcate physical activity and sports in their everyday lives. Under this campaign, many social media fitness challenges have been introduced to encourage fitness among people in which various Bollywood celebrities, politicians and others participated. The ‘Fit India’ movement also encourage people to inculcate good eating habits under its ‘Eat Right’ initiative and engage themselves in plogging which includes picking up garbage while jogging.

In A First, To Tackle Malnutrition, Odisha Introduces A Separate Nutrition Budget