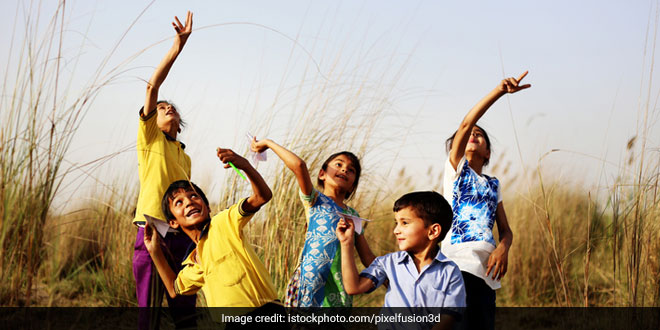 New Delhi: Malnutrition was the primary reason behind 69 per cent of deaths of children below the age of five in India, according to a UNICEF’s The State of the World’s Children 2019 report. The report further goes on to say that every second child in India, belonging to that age group is affected by some form of malnutrition. This includes stunting (low height for age) with 35 per cent of the children, wasting (low weight for height) with 17 per cent and 2 per cent overweight. Malnutrition is not an issue that is new rather it has been a major cause of concern for Indians for decades. UN’s Sustainable Development Goal 2 wants to ensure Zero Hunger, while Goal 3 is good health and well-being for all; these goals are expected to be met by India by 2030.

The Global Nutrition Report 2018 also reaffirmed the crisis of malnutrition in the nation by by concluding that India topped the list of the most number of stunted children with 46.6 million children being recorded as having low height for their age. India was followed by Nigeria (13.9 million) and Pakistan (10.7 million). The report further stated that India was also accounted for 25.5 million children who are wasted, followed by Nigeria (3.4 million) and Indonesia (3.3 million). 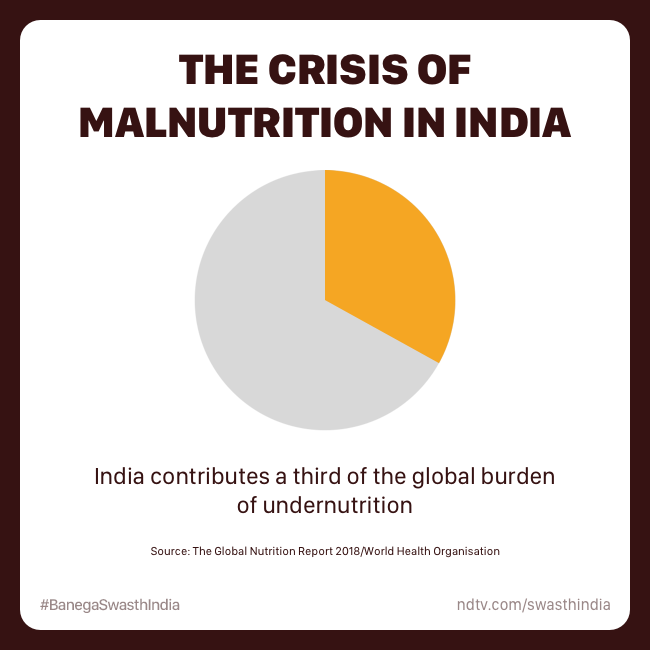 As per the Global /nutrition Report 2018, India topped the list of the most number of stunted children

In this scenario, let’s take a quick look at how malnutrition has been tackled in the previous decade and what is the way forward in order to meet the 2030 deadline.

The Decade That Was: Modest Improvements In Malnutrition Scenario Despite Numerous Interventions

The National Health and Family survey 3, which was conducted in 2005-06, reported that 48 per cent of children under the age of five, were stunted, 42.5 were underweight and 19.8 per cent children were wasted. However, India’s children’s nutritional status modestly improved a decade later, when the National Health and Family survey 4 was conducted in 2015-16. 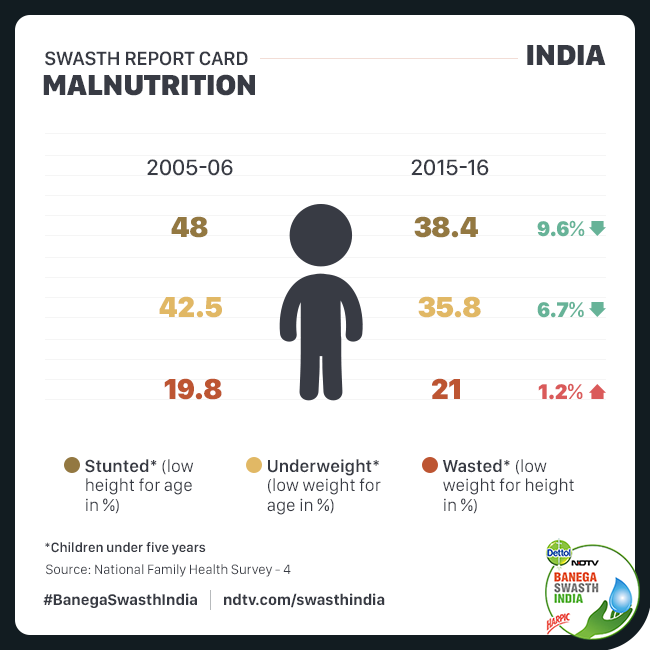 Status of Malnutrition in India: last decade vs this decade

These improvements, according to government data, can be attributed to various schemes and initiatives under different Ministries and Departments at the central as well as state level, which may have existed for a while, but started yielding results after a few years of implementation.

As of 2014, schemes addressing one or other aspect of nutrition are as followed.

There’s no questioning the fact that despite numerous schemes directly and indirectly targeting the nutritional status of children (0-6 year age) and pregnant women and lactating mothers, level of malnutrition and related problems in the country remains high.

There is no dearth of schemes but lack of creating synergy and linking the schemes with each other to achieve common goal. This is where the POSHAN Abhiyaan comes in play, through robust convergence mechanism the programme aims to take these schemes under its umbrella, which will help monitor the outcomes more efficiently.

It was on Women’s Day 2018, when the Prime Minister Narendra Modi in Rajasthan highlighted the agenda of achieving a malnutrition-free India and announced that all the above mentioned schemes fighting malnutrition, will be taken under an umbrella of the Prime Minister’s Overarching Scheme for Holistic Nourishment or the POSHAN Abhiyan.

The primary target of the POSHAN Abhiyan, as per its governing body the Ministry of Women & Child development, is to reduce stunting in children aged between 0 and 6 years from 38.4 per cent to 25 per cent by 2022. The programme also attempts to reduce the level of under-nutrition, anaemia and low birth weight in children, and special attention to adolescent girls, pregnant women and lactating mothers, thus holistically addressing malnutrition.

According to a spokesperson from POSHAN Abhiyan, under this scheme, districts of India with the highest malnutrition burden have been identified and the scheme intends,  to improve utilisation of key Anganwadi Services and improving the quality of Anganwadi Services delivery.
The government data suggests that more than 10 crore people will benefit from this programme.

POSHAN Abhiyan is being implemented by the MWCD as a ‘Jan Andolan’ or ‘People’s Movement’ to create maximum awareness towards the problem of malnutrition and address it in a mission-mode.

Under the Jan Andolan model, the ministry seeks support from various other ministries as stakeholders through their schemes, for example, Ministry of Human Resource Development’s Mid-day meal programme and Ministry of Drinking Water and Sanitation’s Swachh Bharat Abhiyan. 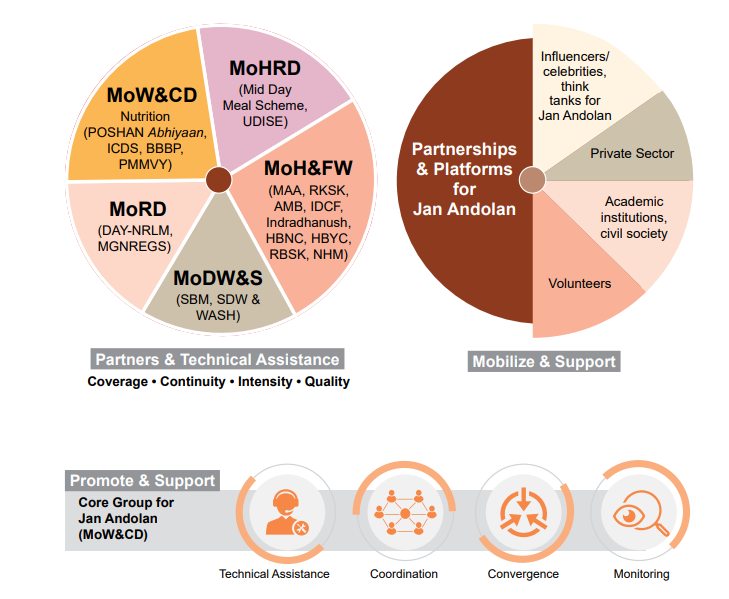 Under the Jan Andolan model, the Ministry of Women And Child Development seeks support from various other ministries as stakeholders through their schemes

However, there is no provision under the POSHAN Abhiyaan to provide nutritious food as providing Supplementary Nutrition is a part of Anganwadi Services scheme, the Abhiyan spokesperson clarified.

According to Arjan de Wagt – Chief Nutrition – UNICEF India, Poshan Abhiyan identifies about ten interventions that include every child needing supplement thrice year, deworming twice year, among other such interventions.

These policies and initiatives are in place and yet many children are not getting benefitted by these. Iron folic tablets are absolutely must for women, children and young girls to receive. The biggest problem faced by the Poshan Abhiyan is the population which resides in the harder to reach areas. Even if the government successfully reached 60 or 70 per cent people under Poshan Abhiyan, the most vulnerable group of people in the country are still excluded or miss out, when these are the people who are in the most need of these interferences, he explained.

He further hailed the Jan Andolan initiative of the government and said that this may help generate maximum awareness.

Dr. Shweta Khandelwal, Head – Nutrition Research, Public Health Foundation Of India (PHFI), acknowledged the role of POSHAN Abhiyan in bringing the issue of malnutrition to the forefront. She said,

Poshan Abhiyaan has been able to bring nutrition to the centre-stage in the political discourse around reducing malnutrition. It has solid backing from the highest leadership and is therefore gearing towards a better stronger holistic attack on all forms of malnutrition.

However, she expressed some concerns over the long term success of the programme, she said,

Convergence or coordination amongst all diverse stakeholders will be a key piece in determining the long term success of this ambitious program. Currently, it does have some operational challenges which may be eased out by visionary sustained accountable leadership, harmonized processes, improved monitoring and surveillance, investing in better outreach and dissemination, integrating health and nutrition education with several other related sectors etc. Along with its 4 Cs, two more Cs conflict of interest and corruption must be dealt with vigilantly. 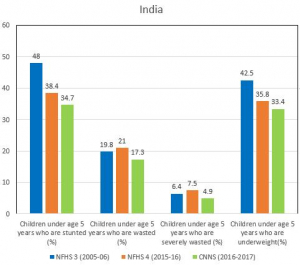 Antaryami Dash, Nutrition Head with the non-profit Save The Children told NDTV that the slow decline of childhood undernutrition is attributed to several factors, which he said include,

However, we need a higher rate of improvement. If the trend of 2017 continues, we will fall short of meeting all our nutrition targets set by National Nutrition Mission by 2022 or WHO and UNICEF by 2030. Currently India has 46 million of stunted children (31% of global burden) and 25 million of wasted children (50 per cent of global burden), he said.

He further praised the POSHAN Abhiyan tackling the issue in a mission mode, he said,

The intention and focus of POSHAN Abhiyaan is all fine, never before we’ve had this level of political will and leadership for malnutrition. It is needed to be implemented strongly focusing on the lowest administrative units (in the Blocks). The success of other flagship programs such as Swachh Bharat Abhiyaan, Ayushman Bharrat, PMMVY will give complementary benefits to nutrition.

While, the Regional Director, Child Rights and You (CRY), North lndia, Soha Moitra mentioned the technique which can further help scale up the yields of the programme in the coming decade.

CRY has been working towards strengthening Community Based Management of Malnutrition (CBMM) which encompasses sensitizing community on nutrition related issues, strengthen local institutions through community monitoring as well as strengthening livelihood opportunities/option to mitigate food insecurities at household level. These strategies have been quite helpful in reducing number of malnutrition in intervention areas. Efforts have been made to sensitize community on nutritional aspect of children, promote kitchen garden, locally availably nutritious millets to improve nutritional intake at households’ level to combat child malnutrition.

She further said that CRY believes CBMM to be the best approach to end malnutrition and same can be adopted in POSHAN Abhiyan for India to be able to meet Goals 2 and 3 of the UN Sustainable Development Goals. She explained,

To realise the Goal 2 (to end hunger achieve food security and improve nutrition and promote sustainable agriculture), government needs to take comprehensive approach to improve nutritional status among children. More importantly, existing Anganwadi centre are not sufficient to cater all children under 0-6 yr. Therefore, more numbers of ICDS centre should be sanctioned to cater children from un-served and under-served areas. At the same time, the ICDS centres needs to be equipped with essentials facilities to make the same child friendly. Implementation of National Food security Act (NFSA) needs be strengthened further to facilitate quality Mid-Day Meal (MDM) in school, SNP and hot cooked food in ICDS as well  as  provision of maternity benefit schemes for pregnant women.

Mr. Wagt from UNICEF India stresses on the importance of empowering the Anganwadi workers in order to make POSHAN Abhiyan targets a reality, as they remain as the last mile connectivity with the most vulnerable group living in the remote areas.

We need to know how well our Anganwadi and ASHA workers are performing in the villages. We need to sensitise them to make them competent enough because at the end of the day, they will be our agents of change in the nutrition sector.

It is good that POSHAN Abhiyan targets to reduce stunting, under-nutrition, anaemia (among young children, women and adolescent girls) and reduce low birth weight along with targeting to equip Anganwadi centre and Anganwadi workers. Keeping in view of abysmal gender based discrimination and exclusion, there is need to engage male members from community to system levels, especially to target in reducing anaemia among adolescent girls, early marriage, early pregnancy and low weight baby birth, and anaemia among women as all these issue are interconnected.

She also explained how the convergence mechanism can be strengthened under the POSHAN Abhiyan moving forward, she said,

To strengthen the convergence mechanism under POSHAN Abhiyan, alignment of district plan is highly required to realise the goals under POSHAN Abhiyan. WASH facilities (water, sanitation and Hygiene) in schools, anganwadi centre as well as community level needs to be ensured. More importantly, promotion of kitchen garden, crop diversification along with promotion of traditional millets is required to improve nutrition status at households’ level to reduce child malnutrition. Convergence with other line departments and institutions including PRIs, Horticulture, Livelihood Mission and others should play critical role in contribution towards addressing malnutrition.

Swasth Report Card: Karnataka Needs To Work On Tackling Malnutrition But Performs Better Than Kerala In Dealing With Anaemia