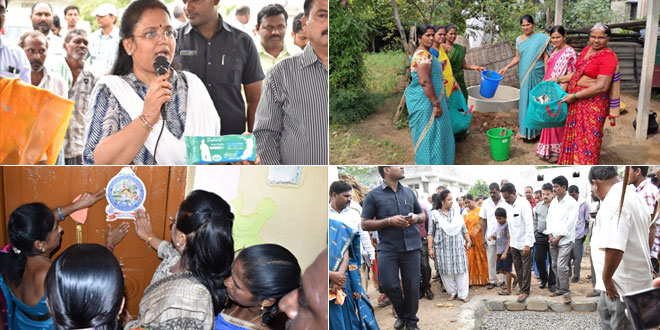 Peddapalli: Three years is a brief period in the life of a district but in this short span of time, Peddapalli not only emerged as a model for the entire state of Telangana but also attracted national attention by bagging the cleanest district in India award. Declared the overall best performing district under the Swacch Sarvekshan (Gramin) of the Swacch Bharat Mission, it is showing to the entire country how change can be brought about if the district administration has the will and commitment to make use of available resources.

A silent revolution is sweeping through the district as all 263 villages have undergone a total makeover, helping the district win six national awards in two years. Avenue plantations on either side of the roads with tree guards bearing names of the donors greet visitors to the villages in the district. A toilet, a soak pit, a compost pit, a kitchen garden in every rural household, a ‘beautiful’ and well-maintained community toilet in every village and other initiatives have changed the face of the district.

The transformation is visible as one drives through Kalvacherla, a village with a population of over 4,500. Women returning from a local programme were seen carrying their belongings in non-woven bags as an alternative to plastic bags while a roadside container had waste plastic items, waiting to be picked up by sanitation workers.

Carved out of Karimnagar district as part of the reorganisation of districts in India’s youngest state in 2016, Peddapalli began the journey from scratch with hardly any infrastructure and few officials willing to work in a place lacking even a good hotel to eat.

Once a hotbed of Maoists, the district with a population of nearly eight lakh was declared Open Defecation Free (ODF) in 2017, but it was still a long way from reaching ODF+ goals. Today, it stands as a role model thanks to the path-breaking initiatives taken in sanitation, waste management, menstrual hygiene, greenery and other areas in last two years under the leadership of District Collector A. Devasena.

Under her dynamic leadership, the district turned free from open drain. All household drain water is routed to a soak pit, eliminating the breeding ground for mosquitoes. Ms. Devasena told IANS at a shed serving as her temporary office,

At a time when entire Telangana is battling unprecedented rise in the incidence of dengue, Peddapalli succeeded in bringing down mosquito borne diseases by 85 per cent this year.

Only last year, Peddapalli was declared a high-risk district for dengue. The individual soak pits and community soak pits also ensured percolation of water into the ground, thus helping in water conservation.

Under another major activity, about 1,000 km of staggered trenches, contour trenches and boundary trenches were constructed across the hills and hillocks, facilitating percolation of rain water in the trenches.

A unique activity called ‘seed bombing’ was taken up for greening of the hilly areas. Under this ancient technique, seeds of forest species are tucked into mud balls, made of a mixture of clay and red soil, which is mixed with Jeevamruth (an organic liquid manure), dried in the shade and then dispersed over hills and hillocks. A record number of 2.24 crore seed balls were prepared and dispersed on the hills and hillocks with 60 to 80 per cent plant survival rate. The district administration also ensured plantation of six lakh plants with the participation of women.

Going beyond sanitation, Peddapalli also became the only district in the country to have its own brand of sanitary napkins called ‘Sabala’. A women’s self-help group (SHG) is running the plant, manufacturing hygienic, high quality, affordable and biodegradable sanitary napkins. Ms. Devasena said,

This initiative for women by women has ensured that menstrual hygiene is available at the doorsteps of women in every household through the extensive SHG network.

Also Read: A New Campaign To Spread The Message Of Menstrual Hygiene Among 12,000 Telangana Students

According to the Collector, this has significantly reduced the number of women visiting government hospitals with infections of reproductive and urinary tracts, mostly caused due to insanitary methods.

The district also earned appreciation from the UNICEF for this programme as the administration succeeded in breaking taboos attached to the use of sanitary napkins and women began talking openly about it.

SHGs were also roped in to manufacture non-woven, cloth, jute and paper bags, plates and glasses made of biodegradable materials to replace plastic as the district administration has banned single-use plastic.

Distribution of separate bins for wet and dry trash, collection of plastic items by the local authorities, use of kitchen waste for waste compost to make manure for kitchen gardens helped in waste management, explained Prem Kumar, consultant to the Collector.

The Collector and her team succeeded in motivating the sarpanchs or village heads to the extent that they are competing to make their villages the best in the district. The sarpanchs are spending money from their own pockets.

In Lonkakesram village, for instance, sarpanch Mohammed Manzoor spent about Rs. 8 lakh from his pocket on sanitation related works. He said,

This is the village of my forefathers and doing something to serve the village and its people gives me immense satisfaction.

Maidam Kumar, sarpanch of Adiwarampet village, is keen to see his village become the best. He spent Rs. 10 lakh of his own money for various works.

What makes the district’s achievements commendable is that the works were undertaken without putting any additional financial burden on the state government. The Collector said,

The Mahatma Gandhi National Rural Employment Guarantee Scheme (MGNREGS) has an excellent setup. It can be tapped for a whole lot of activities for development of villages.

The district achieved another international recognition by successfully implementing the concept of ‘tail to head’, a technique of improving user efficiency and productivity of water under the ayacut of Sriram Sagar Project.

It irrigated 46.28 per cent more area under the Ayacut with a savings of 48 per cent of water utilised. It recorded the highest ever production of 2.80 lakh metric tonnes of paddy during the 2018 Rabi season, while productivity per acre doubled to 40 quintals per acre.

Peddapalli got an opportunity to showcase its development activities at the international forum when the Collector was invited to be part of the Indian delegation at the prestigious World Water Week event held at Stockholm, Sweden, in September, in recognition of her contribution towards the sectors of water and sanitation.

The district has now embarked on linking its achievements to self-respect of every individual and the district as a whole. With intensive information and education campaigns, it is trying to build a sense of pride and responsibility among the people.

The houses in the district are being pasted with ‘stickers of honour’, listing ‘pancha soothras’ or five principles. The administration is making sure that all households become compliant with five principles — use toilet in the house, soak pit as well as a compost pit, a kitchen garden, segregation of waste and use of ‘Sabala’ sanitary napkins.

A recipient of various awards for the works done in Peddapalli, Ms. Devasena is keen to sustain the achievements on a permanent basis. He said,

Qualitative change in the district is the biggest achievement, but sustaining it is the key. It should not be person-oriented. If I leave or some other official leaves, it should not be back to square one.