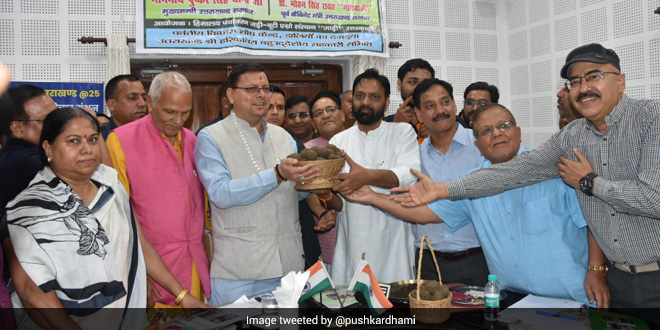 Under the campaign "Beej Bum Abhiyan Saptah", seed bombs made of soil and compost and containing seeds of different vegetables and fruits will be rolled into the forests all over Uttarakhand

Dehradun: Uttarakhand Chief Minister Pushkar Singh Dhami on Saturday (July 9) kicked off a week-long campaign to spread ‘seed bomb’ (beej bum) into the forests, terming it a low-cost experiment that can reduce man-animal conflict by making fodder available to wild animals in their natural habitats. It will also help stop destruction of crops by animals, the chief minister said. Named “Beej Bum Abhiyan Saptah”, the campaign which started on Saturday, will go on till July 15 during which ‘seed bombs’ made of soil and compost and containing seeds of different vegetables and fruits will be rolled into the forests all over the state. Plants and climbers will gradually grow out of the ‘seed bombs’ and provide food for herbivores that often foray into human habitations in search of food and destroy standing crops in the fields.

The campaign is being conducted by an Uttarkashi-based organisation called Himalaya Paryavaran Jadi-Buti Agro Sansthan, ‘JADDI’ under the leadership of Dwarika Prasad Semwal. Speaking on the occasion, Dhami said it is a good experiment as it is scientific and does not cost much and also can reduce man-animal conflict by making animal food available to them inside their natural habitats so that they do not have to foray into human habitations in search of food. More and more people should be associated with the campaign to make it a movement, the chief minister said.

Related Topics:
Uttarakhand
Up Next

Meet The Wood Mafia Of Assam

Aravali Biodiversity Park: A Nursery Of Ideas With Vijay Dhasmana