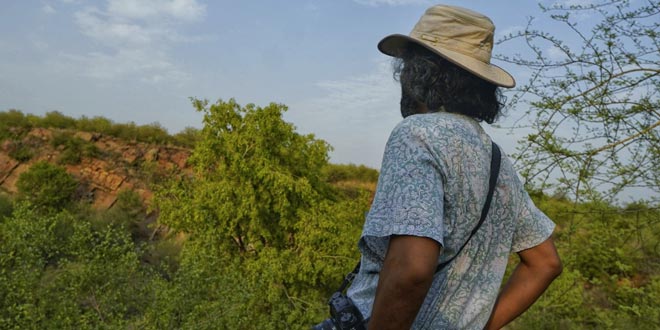 The Aravalli Biodiversity Park is spread across 390 acres and has semi-arid vegetation, with around 300 native plants, 101,000 trees, 43,000 shrubs, and several species of birds

Gurugram: The Aravali Biodiversity Park situated in Gurugram (erstwhile) Gurgaon was once an abandoned mining site. It is now a growing forest patch and home to more than 1,000 species native to the Aravalis, all thanks to Vijay Dhasmana. Mr Dhasmana works in the space of rewilding where they try to restore ecologically degraded lands such as mining sites. They have been working in this field for the past 15 years and all his projects are about creating forests or forest corridors within the city.

Team Banega Swasth India spoke to Vijay Dhasmana about rewilding, ecological restoration and the significance of such projects in the middle of a city. Here are some excerpts from our conversation.

NDTV: What is rewilding and how is it different from plantation?

Vijay Dhasmana: See the word, itself explains it. It is re-wilding. When you’re doing plantation work its only planting trees and in rewilding its more about restoring a landscape – how it was or how it could have been. If it is grassland, then you’re rewilding it into a grassland, if it’s shrubland you’re rewilding it into shrubland. The differences are very subtle, so the plant communities in the process create a habitat of a certain kind which is something you have to be very mindful of while rewilding.

NDTV: What was the process of bringing the forest alive in the Aravali Biodiversity Park?

Vijay Dhasmana: For us it was important that when we gave a vision to this place, we were inviting the forests of Aravali back to the city and that was our vision. In order to fulfill that vision, we selected a few reference sites for the project. We have wonderful forests of Mangar Bani, Sariska, Jheel, Jhalana, and many other forests between Delhi and Jaipur which are a part of the northern Aravali. We selected the forest communities that exist in the region and we collected seeds that were germinated and planted in these reference sites. So, today, we have communities from the Dhak, Sallai, Dhok, and Kumud forests in the park. The project was supported by I Am Gurgaon, a citizen’s initiative focused on restoring Gurgaon’s green habitat that has been lost to rampant urbanisation.

NDTV: What are the challenges of rewilding an area within a city?

Vijay Dhasmana: Any restoration effort has similar challenges around protection. One was legal protection, we wanted legal sanctity for the place and fortunately, today it is declared as an ‘Other Effective Area-Based Conservation Measures’ (OECM) site. It is the first OECM site in the country, in terms of biodiversity. It may be a deemed forest but it is not notified as a forest. It is not even notified as a biodiversity park so, it was important to give it legal protection. When there was a road coming through the park, people got together and fought against the road. Today, you know the construction of the road has been shelved. So legal protection, protection against human encroachment, cattle grazing, and fires is extremely essential.

NDTV: What is the significance of the Aravali Biodiversity Park?

Vijay Dhasmana: The plant species that we planted here are Aravali plant species and unfortunately, Aravalis in the northern part is under threat because of encroachment, real estate development, and mining. It’s leading to a loss of biodiversity and this plays a very significant role in educating everyone, especially the common person of the city to understand Aravalis and its importance for us. Aravalis are a huge reservoir for water security and are therefore significant in conservation.