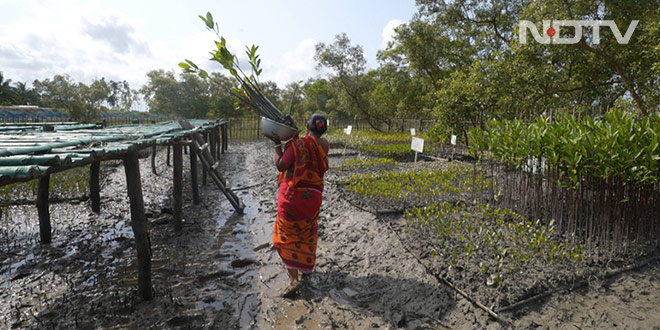 New Delhi: 31-year-old Aparna Dhara lives in Lakshmipur village of Kakdwip Block in Indian Sundarbans with her husband, two sons (16 and 12-year-old), and in-laws. Aparna and her husband are primarily paddy farmers, who also grow some vegetables and own a small shop to sell poultry products. Since Cyclone Amphan in May 2020, Aparna’s house has been destroyed twice. She says, “Earlier there were no trees around our house or on the banks. As a result, high tides would break the banks resulting in water entering our houses and leading to huge devastation.”

But, today, Aparna along with other local women has planted trees and grown a little forest that now protects river embankments. Since the salinity in their area is high, women have planted mangroves like Avicennia (grey mangrove or white mangrove) that can tolerate saline water.

Many like Aparna have created nurseries and planted hundreds of mangroves in and around their area across Sundarbans. And today, they are reaping the benefits of mangroves in the form of a natural bio-shield, strengthened embankments, and forest products. Mangrove afforestation driven by local women has been possible due to the efforts of NGO Nature Environment and Wildlife Society (NEWS) that made these women green warriors.

Forest agencies and other private organisations were always planting mangroves. They would plant in July and by the year end, in December, nothing would remain because they were practising monoculture, that is, planting only one type of species. Also, there was no monitoring of the plantation; it was taken up as a one-time job.

To switch from plantation, a one-time job to afforestation for creating a forest and restoring mangroves, from 2007-2009, NGO NEWS tried a community-led plantation model with local women in three villages. Explaining their work, Ms Dey said,

We selected two patches of land – 100 hectares and 70 hectares. While we created awareness about the importance of mangroves, both plantation and monitoring were done by women. We did the risk mapping to know why mangroves planted by forests or other agencies were dying. There were multiple reasons like grazing, fishing – net dragging would uproot the mangroves and soil erosion – in some places chunks of soil were eroding. We mitigated the risks by involving the community; we asked villagers to not let their goats loose for grazing. We saw that in two to three years, the yield was good. 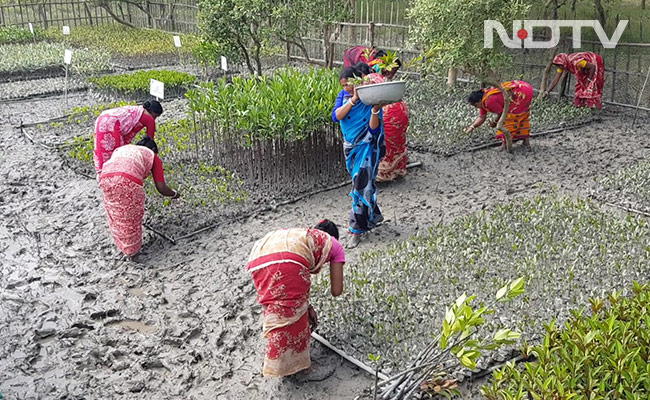 On May 25, 2009, cyclonic storm Aila struck eastern India and southern Bangladesh. Only a tail of Aila touched Sundarbans and part of Kolkata and moved to Bangladesh but it caused heavy damage in the area. In the words of Ms Dey, crocodiles were inside the villages, Aila washed away fishes, and houses were destroyed like someone pressed them with a thumb.

We noticed that wherever we had planted mangroves, those embankments were absolutely okay. It came as a lesson on the importance of mangrove plantations. Personally, the devastation was an eye-opener for me too. We as an organisation started wondering what we are doing here. Unless we are able to make islands resilient whatever livelihood activities we do or houses we build, they will be destroyed if mangroves are not there, said Ms Dey.

It’s after Cyclone Aila, the focus of NGO NEWS shifted to mangrove afforestation and community-led mangrove plantation with the message,

If you need to live here, you have to protect the mangroves.

Soon after the NGO mobilised funds, did risk mapping and from July 2010 to 2015, they did mangrove plantation across 183 sites in Sundarbans, covering 4,586 hectares of land. Over the years, 22 more sites have been added, covering an additional 180 hectares of land.

When we mitigated the risk, we worked with the fishermen and told them to not park their boats all over the embankments because that restricts the growth of mangroves. We asked them to select one area so that we don’t plant there, said Ms Dey.

Nurseries were created at each site so that women involved in plantations are attached to the tree from the start. Currently, only 8-10 nurseries exist at other sites, the plantation is completed and now trees are growing into the forest. NDTV-Dettol Banega Swasth India team visited a central nursery at Manmathanagar where 54 local women are growing different kinds of mangrove saplings. Women like Tumpa Jana believe it’s their responsibility as the inhabitants of Sundarbans to preserve and protect the delta for future generations. She said, 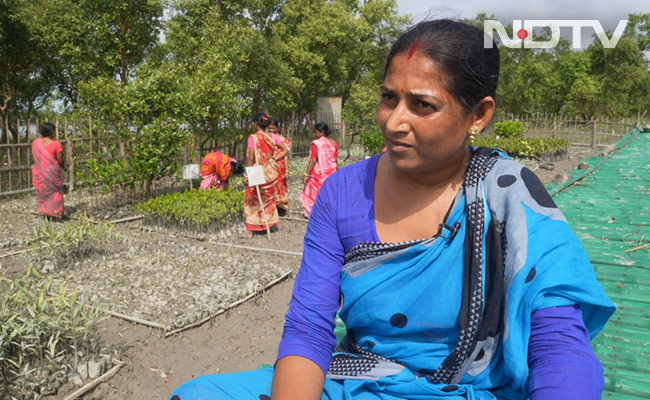 25-year-old Panchami Jana says that growing up, she saw only one severe storm that is Cyclone Aila but in the past few years, the frequency of cyclones has increased and in the last two years, she has witnessed Cyclone Ampha, Fani, Yaas, among others. In the recent past, Panchami had to reconstruct her house twice after severe damage by cyclones.

When asked what makes her stay back in Sundarbans despite all the hardships, she said,

I love the place for its peaceful surroundings. If everyone leaves the village then who will save it?

Similarly, a women’s group in Kakdwip Block is involved in the plantation and goes by the name of ‘green brigade’ as they wear green sarees at work. Ms Dey says that the green brigade is the success story of what we want to achieve, which is community governance in ecosystem management. Elaborating on the same, she said,

In 2015, women from a village in Kakdwip came to us with a request to provide them with green sarees and blouses. When asked about this special requirement, they said, “Villagers don’t take our work seriously and don’t understand that we are going to protect our villages. Every time we go for plantation or surveillance, they ask us to fetch some or the other thing on the way back or carry their children along”. They wanted recognition from the villagers and people around and asked us for a green saree as their uniform which they can wear at work. 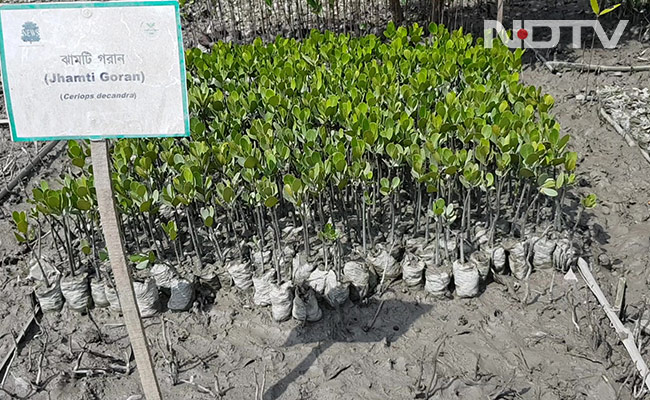 The NGO pays women for the plantation and nurturing process. Once the saplings grow into plants, NEWS work towards income generation of people from the mangroves and mangrove value chain. Villagers get honey, crabs, fishes, shrimps, and other elements from mangroves.

During the plantation season, women are paid Rs. 2,500-3,000 every month. After plantation when they go for monitoring then the entire group is paid Rs. 5,000 which means Rs. 500 per head. We have already started working on the value chain – chicken, backyard poultry farming, and kitchen garden. Through this, women contribute to the family income. Women also offer a visit to the nursery to tourists and take care of their food, accommodation, and travel. This adds to their income, said Ms Dey.

Women of Sundarbans have learnt the importance of mangrove plantation and the lessons are etched in their minds. Purnima Dhara, a woman at the Manmathanagar nursery said,

Aravali Biodiversity Park: A Nursery Of Ideas With Vijay Dhasmana