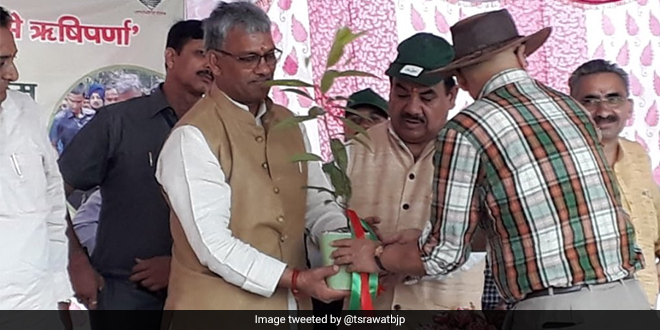 New Delhi: The state of Uttarakhand celebrated the onset of monsoon by planting over 6.25 lakh trees, with Chief Minister Trivendra Singh Rawat on Tuesday also participating in a tree plantation drive. The plantation drive is being conducted under “Rispana to Rishiparna” campaign, launched for the occasion of Harela festival. Rispana and Rishiparna refer to the start and end points of the plantation drives respectively. Explaining the significance of the festival, Mr. Rawat tweeted,

Harela parv of Uttarakhand is celebrated across the hills every year. Harela means the “day of green” and one celebrated today marks the onset of monsoon. Our government uses Harela to carry out large scale plantation drive across state for better water conservation

#Harela parv of Uttarakhand is celebrated across hills 3 times every year. Harela means the “day of green” and one celebrated today marks the onset of monsoon. Our govt uses Harela to carry out large scale plantation drive across state for better water conservation @gssjodhpur pic.twitter.com/mKOPmQ7tro

The plantation drive took place at 11 spots along the Rispana river bank with about 31,000 trees planted across the region. ,” Mr. Rawat at the occasion said,

This is a coincidence that Guru Purnima and Harela parv is being celebrated on the same day. 11 areas have been identified for plantation in Rispana Jalagam region and 31,000 saplings are being planted. A big plantation was carried out in the last Harela to revive Rispana and Kosi river. We have ensured that the plants are being maintained.

Mr. Rawat further planted trees himself and urged the citizens of his state to pay attention towards plantation and environment conservation to ensure that the future generations have access to clean air and environment.

The Chief Minister also noted that about 6.25 lakh trees are being planted in the state of Uttarakhand on Harela festival this time as compared to the 4.50 lakh trees which were planted in 2018.

He shared a picture of him planting the sapling on Twitter and said that he’s glad to participate in the drive. Mr. Rawat further expressed happiness in his tweet over the satisfactory growth of the saplings they planted last time.

Forest and Environment Minister Dr Hark Singh Rawat also joined in the CM in planting trees and supported Mr Rawat’s message of conserving plants and the environment. He said,

Uttarakhand contributes to the 28 per cent of the total biodiversity of India. Therefore, the state of Uttarakhand has the responsibility of saving the ecology.

Mr. Rawat also announced their plan to appoint 5000 senior citizens and students as green ambassadors in the state. These green ambassadors will be given the responsibility of planting, preserving and spreading the message of save the environment message among their community members.

An Exchange On Twitter Led Anand Mahindra To A Big Decision To Ban Plastic Bottles From Boardrooms. Here’s What Happened