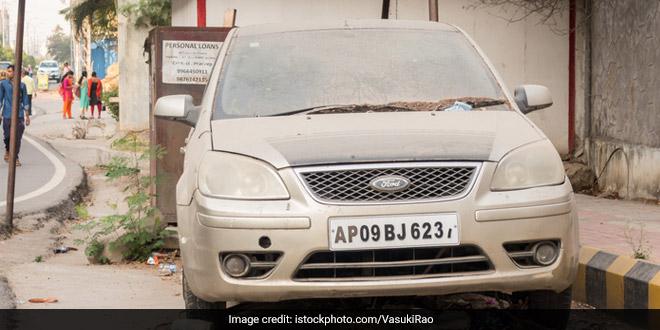 New Delhi: On February 1, Finance Minister Nirmala Sitharaman confirmed that vehicle scrappage policy will be coming soon, while announcing Budget 2021. Union Minister of Road, Transport and Highways Nitin Gadkari, in March shared an outline of the policy, which is said to not only help boost the automobile sector but also help support government’s clean air initiatives.

As per the policy, commercial vehicles will be deregistered in 15 years and private vehicles in 20 years, if they fail to get fitness certificates. Every vehicle beyond the age-limit will have to undergo the mandatory automated fitness test, failing which it will be taken off the road and the owner will be fined. 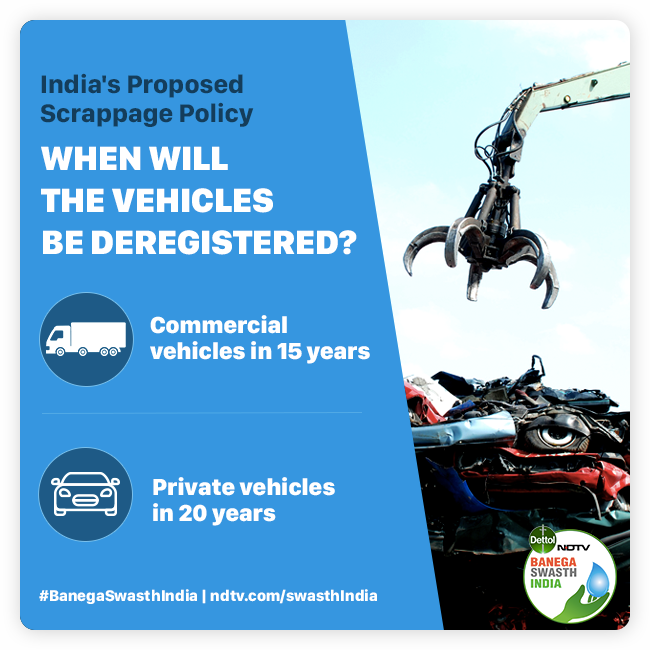 The move will help reduce vehicular pollution and contribute to India’s efforts towards achieving its climate goals. It will also strengthen the country’s road safety and create employment by providing a necessary boost to the automobile sector, Mr Gadkari said while announcing the policy in Lok Sabha on March 18, 2021.

He added that India has around 17 lakh vehicles that are older than 15 years but do not have a fitness certificate.

Government will offer incentives for those who buy a new vehicle and scap the old ones. These initiatives will include tax rebates of up to 25 per cent, to be offered by State governments; 5 per cent discount on new cars to be provided by manufacturers, upon showing the scrapping certificate; as well as a waiver of the registration fee for new vehicle.

Mr Gadkari also claimed that several scrapping centres will be set up across the country where people can sell their old automobiles at approximately 4-6 per cent of the value of the new vehicle. 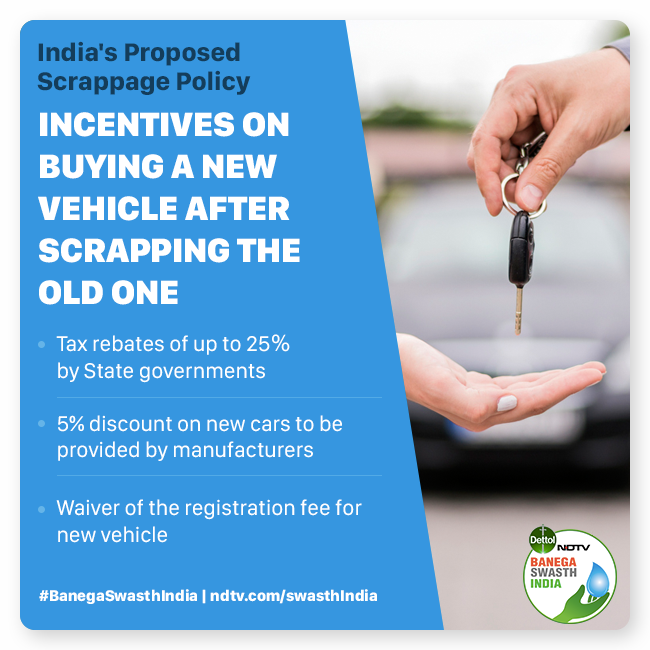 The rules of the policy are likely to come into effect from the end of this year: Experts

The rules of the policy are likely to come into effect from the end of this year post which a vehicle that fails the fitness test or fails to get its registration renewed will be termed ‘end of life vehicle’.

As per a report by Centre for Science and Environment, the older generation of vehicles emit several times more pollutants than the current generation.

Thus, emissions from one old diesel car are equal to four to seven new cars. A 10-year-old diesel car emits 2.4 times higher PM compared to a BS IV car. Toxic emissions, too, are higher from older vehicles. The difference in emissions of different genre of commercial vehicles is also substantial, it says.

CSE’s estimate shows that the emission load from diesel vehicles that are 11 to 15 years old is a lot more on a per vehicle basis than those that are between 1 to 10 years old. Removing old vehicles, particularly old diesel vehicles, from the fleet will substantially reduce direct exposure on road. This benefit can be maximised if the old heavy duty diesel trucks are removed, it says. 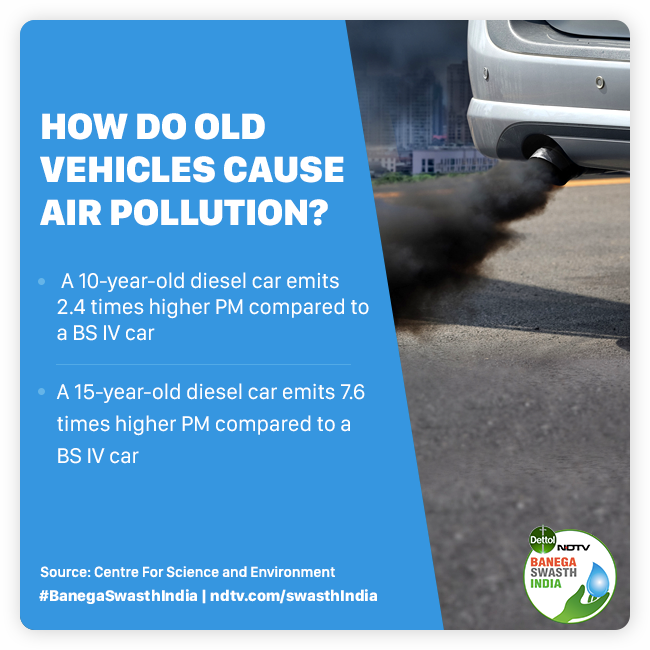 As per a report by Centre for Science and Environment, the older generation of vehicles emit several times more pollutants than the current generation

According to S N Tripathi, member, Steering Committee, National Clean Air Program, the policy will benefit both car owners and clean air initiatives by the government. He tells NDTV,

From the new vehicle scrapping policy for private and commercial vehicles, both owners and clean air plan will be benefitted. While owners will get better deal than scrapping in private yards, the scrapped metal can be used for car manufacturing thus avoiding fugitive dust coming out from metal ores mining. This is a wonderful example of circular economy.

He adds that the time bound scraping will also limit exhaust emissions which is a major cause of pollution in cities.

CSE’s Executive Director, Research and Advocacy, Anumita Roychowdhury says that the policy is an important step forward, but falls short of becoming an instrument of green recovery. She explains,

This is certainly an important step forward to build infrastructure for organised and scientific scrapping of old vehicles. But this misses the opportunity of designing the policy as an effective stimulus programme for green recovery in the sector to achieve deeper and quicker air quality benefits. This policy has only ‘advised’ the state governments and the automobile industry to provide voluntary incentives to the owners of the old vehicles. There is no commitment from the central government to make this a fiscal stimulus strategy in the post Covid times for quicker renewal of the ageing heavy duty vehicle fleet with Bharat Stage VI vehicles or to link other segments with targeted electrification. This is a case of missed opportunity.

She further adds that while the new draft policy is a big positive for supporting a network of well – equipped scrappage facilities, with adequate environmental safeguards to stop unsafe dismantling of old vehicles that contaminate water, soil and air and wastage of material, ‘its focus on targeted fleet renewal for maximum emissions gains is still weak.’ For such a targeted programme for heavy duty vehicles, the policy can take a more nuanced approach, she explains,

Consider the fact that some truck owners may want to only dispose of the very old trucks without replacing it. But others may want to scrap and replace the older trucks. In that case, a rebate can be given to the owners of end-of-life vehicles who are interested in ‘only scrapping’ the vehicle without immediate replacement. And this rebate can be given based on scrappage certificate from authorised scrappage centres. But higher incentives can be given for ‘scrappage and replacement’ of old/end-of-life vehicles with BSVI compliant vehicles.

In this case, Ms Roychowdhury says, the vehicle dealer/manufacturer may also give matching incentives. She suggests that the thumb rule could be to reduce the overall cost of the new replacement vehicle meeting BSVI standards by upto 15 per cent. While old trucks with more economic life left can get comparatively higher incentive as that will give higher emissions benefits. The strategy however, can be different for older personal vehicles – cars and two-wheelers.

For these vehicles, the incentive can be linked with voluntary replacement with electric vehicles. Reason is simple. Personal vehicles are numerous and a generic public support for their fleet renewal can divert a lion share of allocated budget from the priority heavy duty segment Therefore, the public support for personal vehicle segment can be linked only with voluntary electrification. This can be additional to the normal scrapping of end-of life vehicles as already proposed in the draft policy. This can maximise air quality gains, Ms Roychowdhury explains.

Lastly, she asserts that this first ever formal scrappage policy in India is urgently needed to help build infrastructure for safe disposal and material recovery to minimise environmental hazards from junk vehicles and clunkers. But given the fact that India is adopting scrappage policy during these unprecedented pandemic times, it is necessary to leverage this targeted fleet renewal with well-designed central support for post-pandemic green deal.

A Forest Officer From Jharkhand Comes Up With An Idea To Stop Forest Fires, Illegal Tree Felling And Creates Jobs