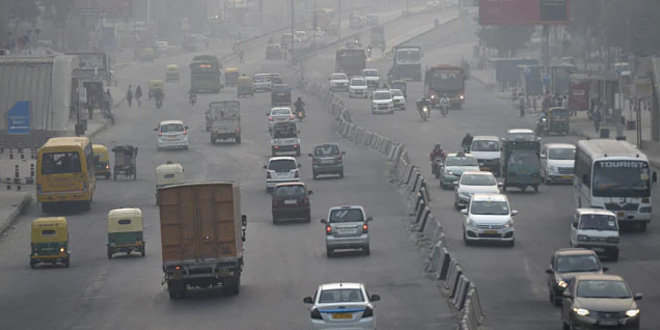 New Delhi: Experts have repeatedly highlighted that air pollution is one of the leading threats to public health as it can cause respiratory infections, chronic obstructive pulmonary disease (COPD), lung cancer, heart diseases among others. Rising emissions of greenhouse gases like carbon dioxide due to indiscriminate human activities are not only affecting the air quality locally but are also degrading the environment globally and increasing the planet’s temperature leading to climate change and biodiversity loss. This in turn raises the risk of increase in zoonotic diseases that can jump from animals to humans and pandemics such as the ongoing COVID-19, say experts. According to the Centre for Science and Environment (CSE), a Delhi based think tank it is imperative to reduce emissions in order to restore the ecosystem and the well-being of human being. In the country, according to CSE, the capital city of Delhi has done more to curb air pollution than other cities in the country and that has resulted in a reduction of a major pollutant called Particulate Matter (PM) 2.5 (particles that are 2.5 microns or less in diameter). However, the organisation stressed that this is far from enough and Delhi still needs to reduce PM 2.5 further by at least 60 per cent for its air quality to be no longer harmful to people’s health.

In Delhi and the larger National Capital Region (NCR), air pollution levels have consistently remained so high that the region has been in the eye of the storm for many years due to consistently unhealthy levels of air quality. According to CSE’s report titled ‘Capital Gains-Clean Air Action in Delhi NCR: What next?’, it took a COVID-19 pandemic induced lockdown for Delhi to once again experience the joys of clean air and blue skies. However, it highlighted that lockdowns are not the answer and for post-pandemic transformational changes it is necessary to draw lessons from what it takes to push durable long-term action.

While talking to NDTV, Anumita Roychowdhury, Executive Director at Centre for Science and Environment and one of the authors of the report said,

We have seen more action in Delhi simply because of more bottom-up pressure. Delhi’s clean air action had started sometime during the mid-nineties. Since then, judicial intervention, civil society action, sharper public opinion, and executive action have come together to catalyse more local solutions. This experience represents an important learning curve for other regions battling air pollution. However, after taking all the extra steps like restricting truck entry, shutting coal power plants and others, Delhi has bent the pollution curve, but it still has to go a long way to meet the clean air standards.

The report said that to reduce air pollution, Delhi has implemented measurements like –

• Closing coal power plants
• Stopping dirty fuels
• Scaling up industrial use of natural gas
• Putting the entire public transport and commercial fleets on compressed natural gas (CNG)
• Banning old vehicles
• Restricting truck entry
• Pushing for electric vehicles and skipping a Bharat Stage standard (emission standards instituted by the Government of India to regulate the output of air pollutants from) and adopting BS VI
• Tightening control on construction
• Promoting bio-decomposer developed by the Indian Agriculture Research Institute (IARI) that dissolves the farm residue into manure; and many other such steps.

Ms. Roychowdhury said that Delhi’s clean air action is an unfinished agenda. It still requires deep action to restrain vehicle numbers and usage, scale up integrated public transport, strengthen city-wide waste management, eliminate use of dirty fuels in small and medium scale units and households among others and all the measures will have to be uniformly scaled up across the NCR, she said.

Where Is Air Pollution Coming From In Delhi And NCR And What Needs To Be Done To Further Combat It? 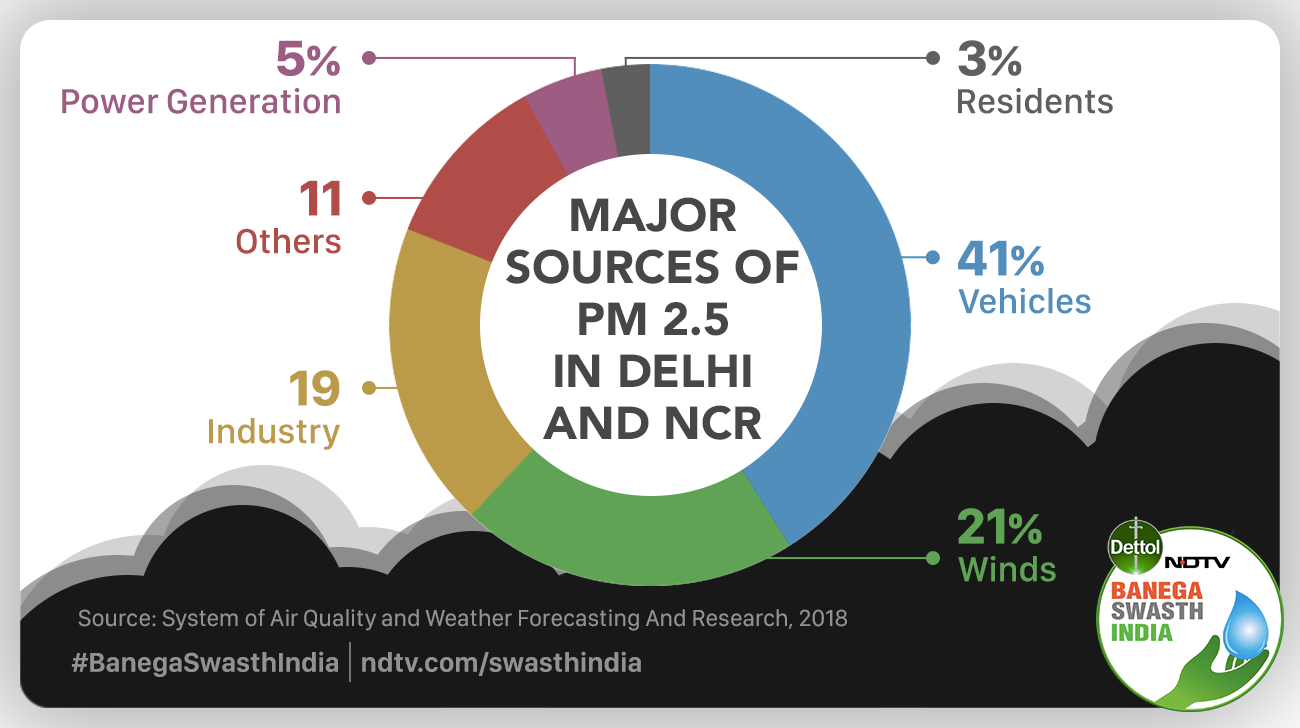 Major sources of PM 2.5 in Delhi and NCR

On vehicular pollution, the report said that government should strengthen periodic auditing of Pollution Under Control (PUC) centres and calibration of equipment and third-party checks. Also, vehicle labelling or sticker programme to identify old and polluting vehicles, as directed by the Supreme Court should be implemented. Stating that Delhi has done well in restricting the entry of diesel trucks, the report said,

The report said that Delhi’s bus service reforms must be accelerated.

CSE review has shown how bus ridership in Delhi has declined steadily since 2014 and bus procurement has been considerably delayed in Delhi and needs to be accelerated. While bus numbers fall woefully short of the court mandated 10,000–11,000 buses, there is also a huge service deficit. However, reforms have started to rationalise the routes and improve tracking of services, along with increasing use of electronic ticketing systems and public information system, it said.

The report has also emphasised on scaling up of electric vehicles in Delhi and NCR and the use of energy-efficient fuel like CNG (Compressed Natural Gas). It has emphasised on advocating for the strict implementation of Bharat Stage-6 norms according to which the emission of carbon monoxide is to be reduced by 30 per cent and Nitrogen Oxide by 80 per cent.

On industrial pollution, the report said that Delhi has seen more progress, but that is partly because a lot of industries could be shifted out of Delhi to neighbouring NCR, while continuing to pollute the common airshed. It said,

Delhi requires stringent enforcement of approved fuel notification. Even though Delhi has adopted one of the most progressive clean fuel policies, its implementation remains a challenge as entry and illegal use of dirty fuels in informal industry clusters has continued.

According to the report, while Delhi was able to shut coal power generation completely, it has not stopped in the NCR. Central Pollution Control Board (CPCB) has identified 11 coal based power plants that are within 300 kilometre of Delhi and are part of the common airshed. The report further said that even though Delhi has closed down all its coal power plants, it needs to ensure that it procures only clean or cleaner electricity from plants that are meeting the standards or are close to meeting the standards. CSE asserted in its report,

Currently, Delhi is procuring electricity from some of the dirtier power plants in the country.

The report has highlighted the need for better solid waste management and circular economy to reduce waste burning by the residents. It said,

Open burning of waste is a serious source of toxic exposure in the region. This remains a challenge despite the series of central rules and regulations that were announced in 2016 with regard to all waste streams—municipal solid waste, plastics, electronic waste, construction and demolition waste among others.

The report has also called for reducing and recycling the waste generated at construction sites.
It further said that waste management has to be seen as a shared responsibility and not a challenge that needs to be dealt with technology alone.

The smoke from stubble burning after harvests in the neighbouring states of Haryana, Uttar Pradesh, and Punjab contribute to the winter smog and chokes Delhi every year. Over the last few years the central government, along with the state governments, have developed several plans to control this. But coordinating with millions of farmers to scale up the solutions is challenging, the report said. The report recommends that there is a need of procuring sufficient numbers of stubble management machines and bio-decomposers, providing assistance to farmers in paddy straw management, building stronger policy to promote enterprises that can use the farm waste and create value for the farmers. It has also recommended changes in the cropping patterns to reduce paddy by promoting locally appropriate crops.

According to CSE, empowered public opinion in Delhi has enabled the early adoption of several important local measures which should be strengthened to implement difficult and inconvenient solutions for speeding up and scaling of change. It emphasised that air pollution is a national health emergency that requires a national framework for air quality management with a strong compliance accountability system. The people can play an important part in combating air pollution in Delhi-NCR in many ways, said Ms. Roychowdhury. She added,

There are so many ways we can all contribute to clean air action. We need to make lifestyle adjustments to walk and cycle more, use public transport to reduce dependence on cars; be part of the community vigilance in our neighbourhoods to stop waste burning and construction without dust control; practice energy efficiency measures at home; push the municipality to collect segregated waste from our households and recycle that, demand action on polluting activities and vehicles in our neighbourhoods, show support when government has to implement inconvenient and difficult measures and there is pushback; access and understand information on air pollution risks for responsible action, and be mindful of not supporting action that pushes pollution to the backyards of the poor people’s neighbourhoods. Change the politics around the issue.

World Health Day 2021, The Day Dedicated To Building A Fairer, Healthier World For Everyone