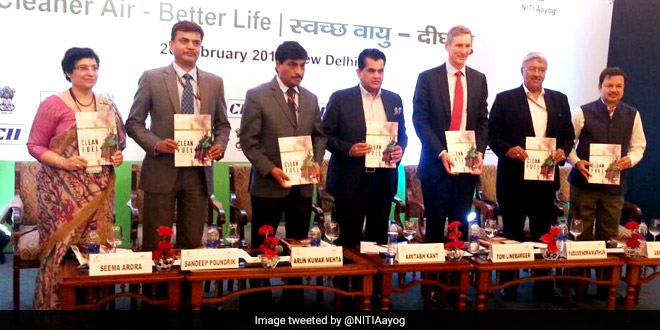 New Delhi: NITI Aayog CEO Amitabh Kant said there should be constant checks on old vehicles in the national capital with those flouting the environment norms need to be taken off the roads. He said the future lies in zero emission vehicles and urged Delhi Municipal Corporation to push for eco-friendly measures, while releasing a report — Biomass Management, Clean Fuel and Clean Transport.

“Challenge is now for the transport department to really ensure that all vehicles are constantly checked and those which are not meeting the standard are taken off the road,” said Mr Kant.

The report has been jointly prepared by industry body CII and NITI Aayog. Mr Kant further noted that construction sites are also a challenge in Delhi.

“Construction sites should be cleanly maintained. Regular sprinkling of water should be done,” he said, adding that municipalities must clean up the streets of Delhi.

He cited the special provision in the Union Budget 2018- 19 for curbing pollution in Delhi. Under this, a scheme of Rs 1,200 crore will be executed with the Delhi government and adjoining states to address the rising air pollution in the national capital. This requires the administrative will of not merely Delhi but also of neighbouring state, Mr Kant said. He also stressed on the importance of change in farmers’ behaviour towards crop burning. According to the report, it is estimated that roughly 39 million tonnes of paddy straw is burnt in Haryana, Punjab, Rajasthan and Uttar Pradesh.

“Therefore, multi-pronged strategy needs to be adopted to drive the behavioural change in farmers’ community through extracting more value out of the farm waste,” the report said.

Fine of Rs. 50, If Found Defecating In The Open In Odisha’s Capital Bhubaneswar