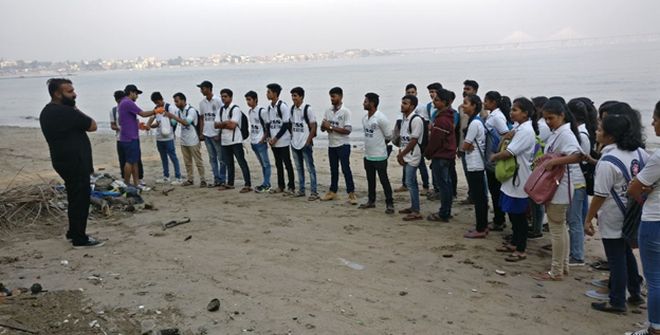 New Delhi: On a Sunday morning, Ravi Shankar, a resident of Dadar, was leisurely walking on the beach with a plastic bottle in his hands. As a habit, he dumped the plastic bottle on the shores of the beach. Suddenly a group of people shouted at him and said – Stop! Do not dare litter our oceans. An ashamed Ravi, realised what he was doing was wrong and started helping the volunteers clear the mess from the Dadar beach. This is what ‘Save The Beach’ campaign volunteers do every week since August 2017 – they clean-up the garbage from the beach, educate people about marine litter and motivate them to make Dadar a clean beach just like Mumbai’s Versova beach. The campaign has recently completed 19 weeks of continuous cleanup and has removed approximately 100 tonnes of garbage apart from educating thousands of people about why it is necessary to keep our oceans clean.

Roaming alongside Dadar beach, one picture that always broke my heart was the scene of the beach surrounded by piles of garbage. It was in the month of August, when, I thought of doing something to change this dirty picture at Dadar Beach. With 2 other volunteers, I started a social campaign – Save The Beach.

Today, the campaign has 75-100 volunteers, who every week, without fail go out to clean Dadar beach. From collecting plastic waste to cloth, idols, flowers, biomedical waste, these volunteers are clearing it all.

What started as a campaign of 3 people, today have gained lot of strength. We have started getting support from corporates, students, local residents and big support from the Brihanmumbai Municipal Corporation (BMC), adds Chinu Kwatra. 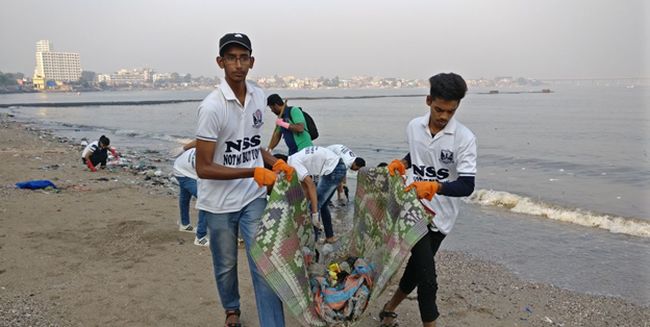 Aim of these warriors is to make Dadar beach waste-free

Apart from weekly clean-up, the campaign also focuses on the beautification of the beach with palm trees, street lights, public toilets and dustbins.

For fulfilling the dream of a ‘Swachh Dadar’, we need support from everyone – From people to the municipal corporation. We have already asked BMC to install dustbins on the beach, so that littering on the shore can be avoided. Apart from it, we are also motivating people not to use plastic, and are also asking them to recycle plastic as much as they can, adds Chinu.

Mrs. Indu Mehta, a resident of Dadar west and a mentor to Chinu who motivated him to start the campaign, adds,

The sorry state of our beaches is no secret. As our father of the nation Mahatma Gandhi ji has said ‘Be the change you want to see in the world’. The drive which we started 18 weeks back has now become a mass movement. It is our duty to roll up our sleeves and help the BMC and concerned authorities in cleaning the beach. Awareness on waste management is need of the hour. These mountains of plastic garbage have been created by us, and now we all should come forward to clean the mess.

Every week, these volunteers manage to clean-up 5-8 tonnes of trash from the beach and are adamant on making this weekly affair for the coming years, a successful affair.

“We will make Dadar spotless and make sure each one of you are aware about ocean litter,” Chinu signs off.

You May End Up Paying A Hefty Amount If You Spit, Defecate, Or Litter In Public Places In Maharashtra