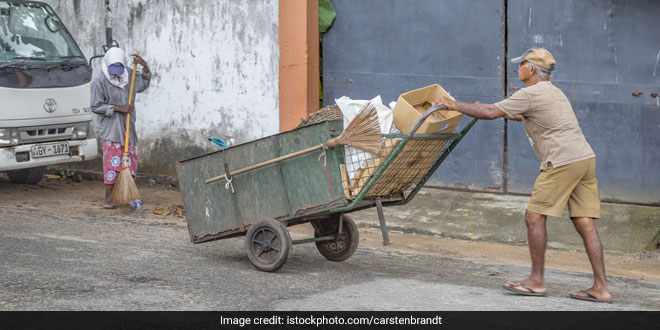 Chandigarh: The people of Chandigarh heaved a sigh of relief as private waste collectors resumed door-to-door collection from households on Tuesday, three weeks after they went on strike to protest Chandigarh Municipal Corporation’s (MC) move to take over waste collection duties from private players in the city. The city reeled under garbage crisis during this period as arrangements made by the municipal authorities to collect waste from households failed to provide relief. The door-to-door garbage collectors decided to resume work after the Municipal Corporation on Monday agreed to follow the old system of lifting garbage from households for three months till a new system was adopted.

The decision was taken after Chandigarh Mayor Davesh Moudgil and senior officers held discussions with representatives of the door-to-door waste collectors. The MC has decided to start a special awareness campaign regarding segregation of dry and wet waste by involving the door-to-door collectors. The private collectors too have agreed that they would be collecting dry and wet waste separately and help the MC in its efforts. Earlier, the MC had pressed its fleet of tractor-trailers to lift waste from households. However, this method of waste collection did not find favour with many of the residents.

“The men engaged by the MC to lift garbage from households used to park their tractor trolleys at a distance. We had to come out of our homes with the waste to reach the vehicle. On some days, they failed to turn up. Piling of waste in our homes for several days posed disease threat in this rainy season. Now, as the private collectors resumed work, we are relieved,” said 65-year-old Baldev, sector 49 resident. Even senior BJP leader Harmohan Dhawan had on Thursday hit out at the Chandigarh Municipal Corporation, saying the civic body “acted in haste” and was “ill-prepared” when taking over waste collection duties. Notably, the BJP has majority in the Chandigarh MC.