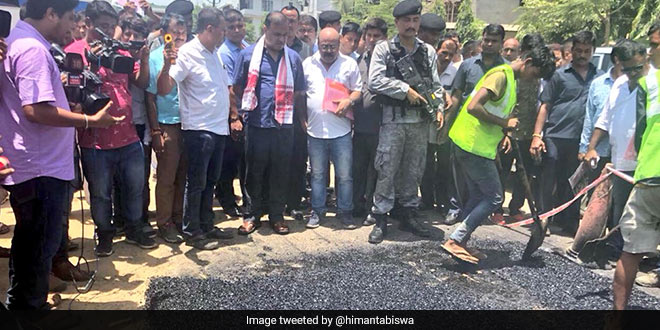 Mumbai: Joining the list of states like Maharashtra, Tamil Nadu, Madhya Pradesh and immediate neighbour Meghalaya, Assam has taken up a pilot project to construct roads from waste. Public Works Department minister Himanta Biswa Sarma laid the foundation of a 100 metre road in the largest city of Assam, Guwahati on July 19. The first-of-its-kind project was launched on the Kahilipara-Dakhingaon Don Bosco Road in the presence of the PWD officials. The decision to put city’s plastic waste to use was inspired from the Meghalaya government which constructed 1 kilometre road in Nongkynjang using plastic waste earlier this year.

The initiative aims to reduce the amount of plastic waste ends up in landfill. The roads made from plastic will also help in maintaining roads during monsoons. Plastic roads will be more durable and cost effective said Mr Sarma,

Also Read: Plastic Waste Management: Adidas To Use Only Recycled Plastic By 2024, Aims To Save 40 Tonnes Of Plastic Per Year

“Today we launched a pilot project to use waste plastic in road construction at Kahilipara Dakhingaon Don Bosco Road, #Guwahati in presence of PWD officials. If it gives desired results, it will help in disposing off plastic waste & prevent damages to road caused due to rainfall.”

Today we launched a pilot project to use waste plastic in road construction at Kahilipara Dakhingaon Don Bosco Road, #Guwahati in presence of PWD officials. If it gives desired results, it will help in disposing off plastic waste & prevent damages to road caused due to rainfall pic.twitter.com/gcxRyGyauo

Guwahati generates approximately 22,000 kilos of plastic waste of which 60 per cent is recycled. The remaining plastic is either dumped in landfills or burnt causing air pollution.

The roads will be developed by using the technique pioneered by Plastic Man of India, Rajagopalan Vasudevan, a professor of chemistry at Thiagarajar College of Engineering, Madurai.

The plastic generated in the city will first be segregated by the Guwahati Municipal Corporation (GMC) according to their thickness as usually plastic carry bags of more than 60 microns are preferred in the road construction activity.

“Once segregated, the plastic is then cleaned and shredded to a size between 2.36 mm and 4.75 mm. After heating the shredded plastic, bitumen is added. The resulting mixture is laid on the road surface at 110 degrees to 120 degrees Celsius,” explains PWD assistant executive engineer (new technology cell) Prahlad Kakati. Replacing plastic waste with cement will help the corporation save around Rs 21,000 said Mr Kakati.

Since this is a pilot project, the corporation has outsourced the process of shredding plastic and an Indore-based company has been given the contract of supplying shredded plastic. If successful, the GMC may set up a plastic shredding unit in the city.

Noting the amount of plastic waste generated every day in India (15,000 tonnes), the central government in 2015 had directed all the road developers in the country to make use of waste plastic in road construction. Since then a number of cities including Indore, Chennai, Pune, Surat, have come forward to build roads from plastic waste. In last three years, India has built one lakh kilometres of roads in at least 11 states using discarded plastic.

Rag-pickers To Work As ‘Environment Warriors’