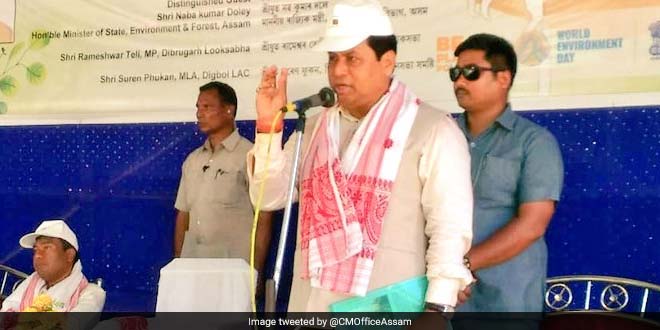 New Delhi: On the occasion of the 45th World Environment Day, as several Indian states pledged to work towards better environment and reducing the use of plastic, the state of Assam promised to increase its forest cover. Speaking on the occasion of World Environment Day, Assam Chief Minister Sarbananda Sonowal asked the people of Assam to work towards becoming a plastic free state. The Chief Minister also said that his government was committed to increase the depleted forest cover of Assam, and has made special budgetary provisions to work towards meeting the target.

The Chief Minister inaugurated the state level World Environment Day celebrations at Digboi, and also laid the foundation stone for the Interpretation Centre cum Museum. The centre will focus on forest conservation in Assam, which has one of India’s richest forest covers, but has struggled with depletion in the recent past. Winners, who participated in the art and essay competitions held as part of the state’s World Environment Day celebrations, were given prizes. They were also presented with saplings and asked to plant and look after them. Speaking about the challenges faced to conserve the state’s ecology, the Chief Minister urged every citizen of Assam to plant at least 10 saplings every year and Green Assam mission a movement with mass citizen participation. The Chief Minister himself planted saplings at Digboi’s Bonapani-based Arboretum.

Under the guidance of Forest Department brand ambassador, people of Belona in Barpeta district have pledged to make their village plastic free. I appeal to people across the State to do the same and help build a clean, green Assam : CM pic.twitter.com/0dDZJU775F

The Assam CM also spoke about the necessity to beat plastic pollution, and transform the state into a plastic free state and eventually into Pradushan Mukta Assam or Pollution Free Assam. Congratulating residents of Belona in Barpeta district, who have made their village plastic free, the Chief Minister said that people across the state can learn from them and do their bit towards building a clean and green Assam. Commenting on the nature of non-biodegradable plastic, Mr Sonowal said that use of low grade plastics reduce soil fertility and appealed to all sections of the society to discourage the use of plastics.