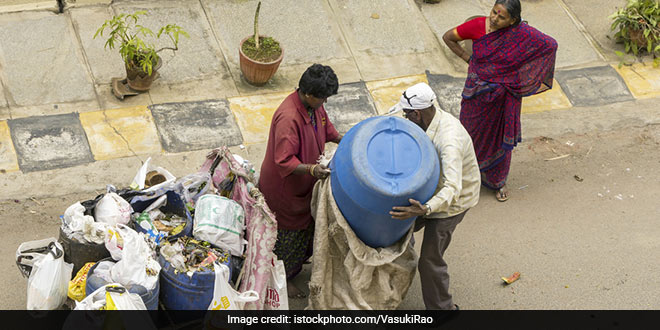 Mumbai: Every morning, for the last three years, 38-year-old Jothi Venkat rummages through the waste she collects from over hundred households in Tamil Nadu’s Vellore region often exposing herself to contaminants and hazardous materials that pose health risks. She has no choice but to use her hands to segregate the bio-degradable waste from the non-biodegradable ones before dumping the waste onto the landfill. Like her, lakhs of sanitation workers go through the same process in India. To make the problem a thing of the past, municipal corporations across Tamil Nadu will now introduce battery-operated waste collection vehicles with an in-built facility of waste segregation.

Under the Swachh Bharat Mission, the Commissionerate of Municipal Administration will spend Rs 654 crore to procure approximately 1,600 eco-friendly three wheelers.

The three-wheeler garbage collecting vehicles are fully battery-operated which means it will emit zero pollution, make the work environment of sanitation workers friendlier and reduce the time of garbage collection and segregation. Currently, age-old tricycle carts are used across the state and they will be replaced by the battery-operated vehicles in the next three months, said an official from Commissionerate of Municipal Administration.

The vehicles can cover a distance of 50 kilometres on one charge. The vehicle can function for six hours daily which means that it can conduct multiple waste collecting rounds throughout the day. It will also lessen the time taken per round, doubling the number of households covered each day.

Waste segregation being the key to reducing overall waste generation, the vehicles are designed in such a way that it can ensure that the waste segregated by the households remain intact throughout the journey.

In regular pushcarts, there were no separate rooms to store the dry and wet waste and the whole purpose of segregation at household level would be defeated. The new vehicles will have an in-built facility that will solve this problem, adds the official.

Inside the vehicle, six trash bins will be placed for dumping wet waste. With every bin, a bag will be attached to store the dry waste. While the wet waste will be dropped at the designated dumping spots, the dry waste will prove to be an asset for the sanitation workers. The workers can visit any of the municipal corporation approved recycler and sell dry wastes including papers, cardboard, thermocol, plastic items, etc at Rs 6 per kilo. Depending on the weight of the garbage sold, each worker can earn up to Rs 7,000 every month.

The health of the workers and dignity of the job will be ensured by the vehicles as the sanitation workers will no longer have to separate the garbage with their hands,

For nearly three years I have been handling all types of waste and no one human likes to put their hands in garbage. Plus, our job is looked down upon in the society as we handle waste. The battery-operated vehicle is a boon to every sanitation worker. I am happy that with the world progressing,technologically even waste collection sector is moving forward, says Jothi from Vellore Municipal Corporation.

Hyderabad Gives A New Meaning To Plastic Waste, To Use Paver Tiles Made From Recycled Plastic

To Combat Vehicular Air Pollution, Bengaluru Will Switch To Electric Buses In The Next Five Years