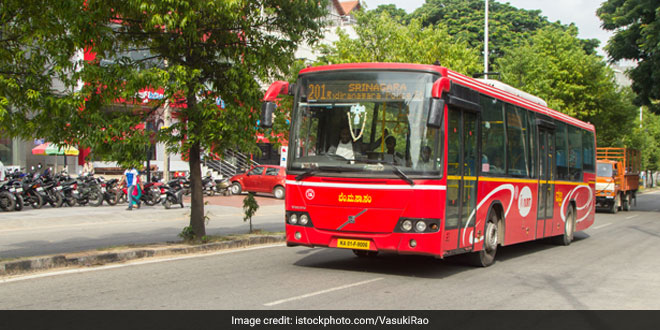 Mumbai: Increasing number of vehicles on roads and unscientific waste management are the two reasons that have led to a spike in air pollution levels in India’s IT hub Bengaluru, points a latest report by Karnataka Pollution Control Board (KPCB). The same report also says that particulate matter (PM10), in the city stands at 78 micrograms per cubic metre, which is higher than the permissible limit of 60 indicating that the air quality is getting compromised. As a solution to high levels of vehicular pollution, the Karnataka government will switch to battery-driven electric buses. Karnataka Deputy Chief Minister G. Parameshwara, who was present at the World India Expo in the state capital announced that all the polluting diesel vehicles for public transport in Bengaluru will be replaced with electric-buses in the next five years.

Also Read: Air Pollution In Bengaluru: Not Just Outdoors But Air Has To Be Clean Even Indoors, Say Experts

We have to embrace eco-friendly modes of energy to combat pollution. We will replace all BMTC diesel-run buses with electric buses in the next 5 years. We are proud to host the Bus World India Expo in Bengaluru, said the Deputy Chief Minister.

We have to embrace eco-friendly modes of energy to combat pollution. We will replace all BMTC diesel-run buses with electric buses in the next 5 years. We are proud to host the Bus World India Expo in Bengaluru. pic.twitter.com/yt4hC9TviI

About 6,500 diesel buses operate across the city, ferrying about 50 lakh commuters, which is 50 per cent of its over 1-crore population. The Deputy Chief Minister Parameshwara said that introducing electric buses will not only improve the air quality in the city but also reduce the operating cost of the state-run buses which in turn will make commuting more affordable for the people. The money spent on purchasing fuel will be avoided thereby bringing down the overall cost operation.

The move to use battery-driven electric buses is to curb vehicular pollution caused by diesel and reduce operating cost of the state-run public transport. The number of private vehicles in the city has shot up 100 per cent to 70 lakh over the last 20 years. Efficient and frequent electric buses will not only reduce air pollution, but also make more people use them for commuting, he added.

The plan to replace the buses will be carried out in phases and all the details, right from operating cost to maintenance, have been finalised with the Bangalore Metropolitan Transport Corporation (BMTC) said the Deputy Chief Minister,

Chief Minister H.D. Kumaraswamy discussed the BMTC plan with officials to replace all buses of the state-run public transport service with electric battery version to reduce depending on polluting fossil fuel and the operation cost.

The 8th edition of ‘Busworld India’, a bus-cum-coach three-day expo was organised at the Bangalore International Exhibition Centre (BIEC) on the city’s northern outskirts. The expo showcased products, technology, services and solutions of about 120 bus and coach makers, component suppliers and technology providers.

“As the main issue in many countries and cities is congestion and pollution, the expo is the right platform to find solutions to the urban menace,” said Busworld President Didier Ramoudt on the occasion.

Public Transportation: Other Indian Cities That Are Making The Green Switch

India’s first electric bus was commercially launched for public transportation by the Himachal Pradesh Transport Corporation on September 22, 2017. The bus, that travels between Kullu-Manalli-Rohtang Pass, came with a capacity to run 200 kilometres on a single charge that required less than 4 hours to charge itself. Since then, cities like Mumbai, Delhi, Kolkata and Hyderabad have been experimenting with eco-friendly modes of transportation.

Maharashtra’s capital city got 25 hybrid electric buses this year in March. The city will be able to reduce 40 per cent pollution due to the buses, Chief Minister Devendra Fadnavis had said while launching the buses.

Electric buses have also been introduced in New Town in Kolkata. Over 20 buses with 32 seats in each have been rolled out and four charging points have also been set up across New Town. The electric vehicle experiment was one of the factors that contributed towards making Kolkata West Bengal’s first green city this year.

With Inputs from IANS