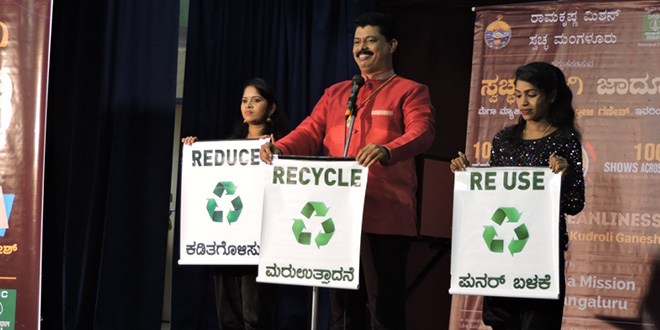 Mumbai: What if there was a magic box, where if one deposited a plastic carry bag, it could be transformed in to an eco-friendly bag made of cloth? Wouldn’t it solve one of the most fundamental problems of plastic litter? If not literally, then at least symbolically there actually exists such a box in the magical world of Kudroli Ganesh, a magician from Karnataka’s Mangaluru city. Besides this box, there are other boxes too, some that make garbage disappear magically once a broomstick is waved around it. Kudroli Ganesh, a recipient of India’s first ever Illusion Magic Award, after performing in over 1,500 shows in the country and across the borders with his troupe, is now aiming to educate school children about the concepts of Swachh Bharat Abhiyan like cleanliness and waste management with his exclusive magic shows. 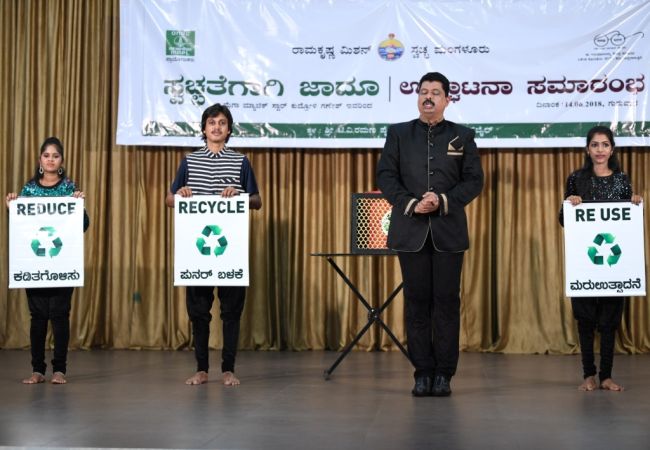 Kudroli Ganesh is educating students about the aspects of cleanliness

He along with his six-member team has set a target of covering 100 schools in the city and so far he has covered over 50 schools in last one month.

For children, magicians are always someone who possess supernatural powers. Magic is fascinating for every kid as it takes them to a world where anything is possible. Putting my professional skills to use for a noble cause, I decided to take up the task of spreading awareness and do my bit for the society after people from Ramakrishna Math and Mission approached me.

The magic show which lasts for 60 minutes is divided into five acts and is performed for class 6 to 10 students. The first segment involves doing generic magic tricks and once everyone’s attention is attained, the following acts begin. Calling the method as ‘Joy Of Learning’ Mr Ganesh says, “It is very normal for students to forget about the lessons imparted in school. Teaching is a very hard job and only when something is taught with joy, it stays with them and makes them receptive to new concepts.”

Also Read: ‘Weddings Are Not Always About Pomp And Show,’ Says Chennai Duo Who Give Wedding Planning A Green Twist

Four Mesmerising Tricks That ‘Magically’ Pass On The Cleanliness Message

‘Where should we ensure cleanliness?’ With this question the famed magician conducts an interactive session for a few minutes, post which he puts the answers in a broader perspective and connects household swachhta with the earth. An empty box displaying the five elements of earth (air, water, fire, sky, and earth) on a banner is kept on the table. After a while garbage emerges now the box symbolising what man is giving back to the planet in return of the five elements. He then waves a broom like a magic wand around the box and the garbage magically disappears. 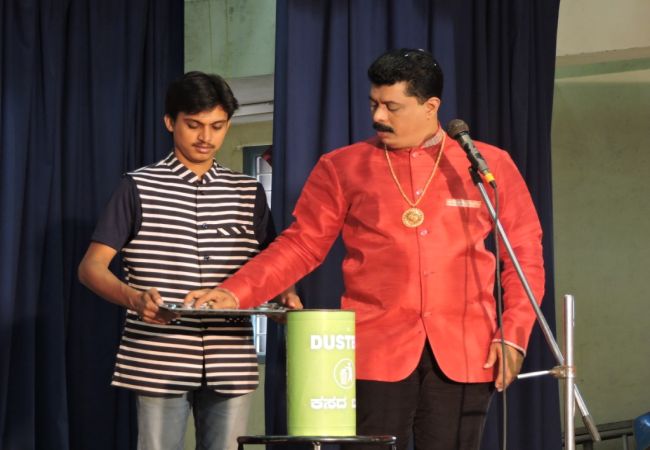 It is the ‘jhaadu’ (broom) and not ‘Jaadu’ (magic) that will resolve the uncleanliness, says Kudroli Ganesh

It is the ‘jhaadu’ (broom) and not ‘Jaadu’ (magic) that will resolve the uncleanliness, he tells the students as he drop the curtain on the first act.

The next lesson is on littering. He places a small bin inside a big bin and once again moves his broomstick around the bin. The bin, on its own, empties itself. Here he teaches them about the functions of municipal body and how as citizens, one should help them maintain the streets litter-free.

Shifting his focus to air pollution and the need for more greenery, he showcases a small plant and starts pouring water in it. The water continues to flow even after he distances himself from the plant and within a minute the plant grows big. 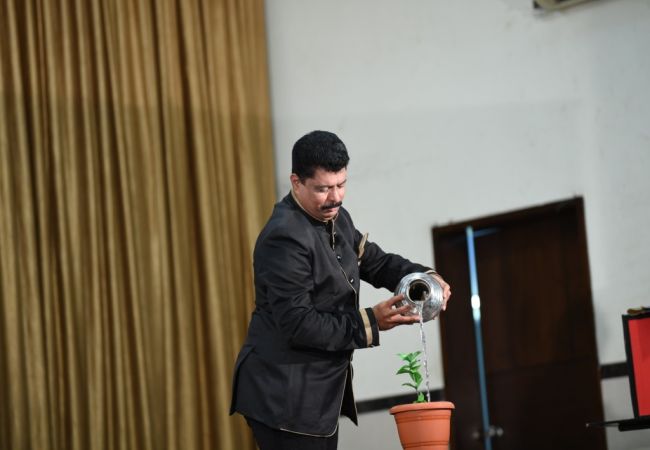 The final act is the most important act, he says. It consists of the 3 Rs – reduce, reuse and recycle. He uses a cylinder where he deposits a plastic bag and gets a cloth bag in return.

I tell them about the harmful effects of plastic and share some hard-hitting facts with the students. I also request them to attain the power of ‘reduce’ by eliminating plastic bags from their lives, explains Mr Ganesh.

For the ‘reuse’ part, he places plastic cutlery on the table and magically converts it into steel. And finally, for the ‘recycle’ point, he takes a newspaper and tears it into pieces. The shredded pieces are deposited in a cylinder. After a few seconds, the pieces get recycled and a brand new paper sheet comes out displaying the message of save trees by recycling old newspapers. He also uses, plastic bottles as an example to underline the importance of recycling. 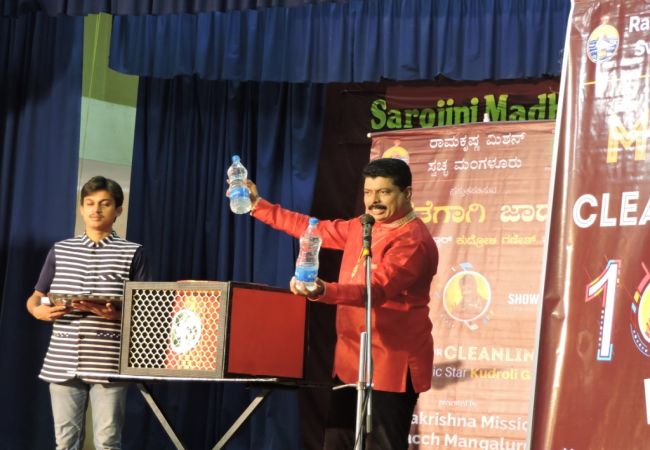 The magician uses plastic bottles to explain the concept of recycling

To ensure that students implement the aforementioned concepts in their everyday lives, the magician makes them take an oath of cleanliness. 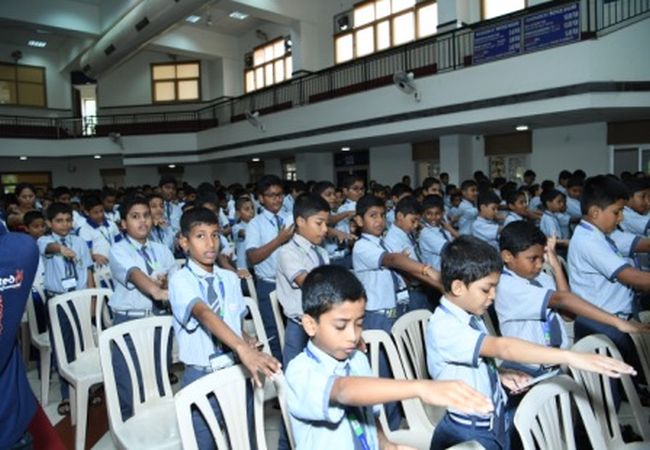 Students take the oath of cleanliness

The show ends on a high note with this arousing message from the man of the magic,

Lack of hygiene is a problem that transcends religion, caste, language, etc. Thus, we must unite and achieve the goal of cleanliness. If we have a ‘Swachh Mann’ (clean mind) then we can have a clean environment.

Meet 35-Year-Old Green Warrior From Bengaluru, Who Is Planting Trees Across India Since 2007

‘Weddings Are Not Always About Pomp And Show,’ Says Chennai Duo Who Give Wedding Planning A Green Twist