New Delhi: “I have been working as a sanitation worker for more than 30 years now. I have never been employed directly by the corporation or sewerage board. However, I have done a lot of work for them informally. Many things end up in large sewers. Once I walked through the large sewer line near Cubbon Park to clear a cow stuck in the sewer. The sewerage board gave me a gun to walk through the large sewer. The water in that large sewer is knee deep and sometimes comes to waist level and has all sorts of creatures in it – snakes, birds, rats; hence the gun. I had to cut the rotting cow with a saw. It took me almost an entire day”, narrates 50-year-old Gangalappa, a sanitation worker, featured in the photo exhibition, ‘The hidden world of sanitation workers’ by WaterAid India. 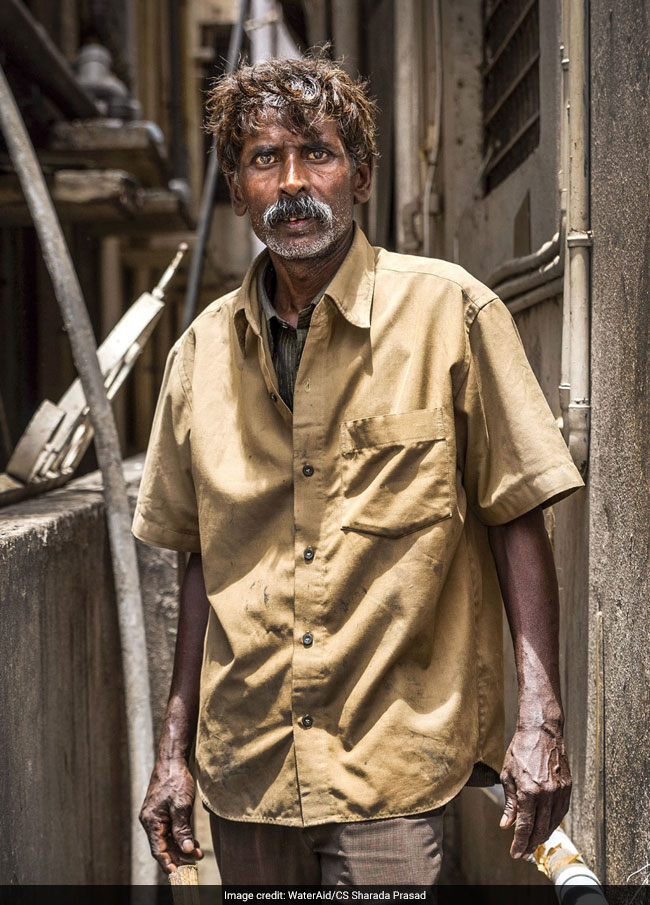 When I had to go home, I could not take a bus or rickshaw as I was stinking because of the rotten cow. I walked for two hours to get home. Even while walking I had to stay as far away from the public as possible.

This is the story of Gangalappa, and the sad truth is, he is not the only one coming in direct contact with knee deep sewage or manually emptying pit latrines (pit toilets – a type of toilet that collects human faeces in a hole in the ground), there are more like him, not only in Bengaluru, but across India, performing more or less the same job. What adds to the problem is, sanitation workers not being recognised by the government and often working without any safety gear.

These days everyone asks us to use safety gear – particularly shoes and gloves. But you cannot work wearing those. It is not easy to get into or climb out of the pits if we wear shoes or gloves, says 54-year-old, Kaverappa, who has been emptying pits for almost 35 years. 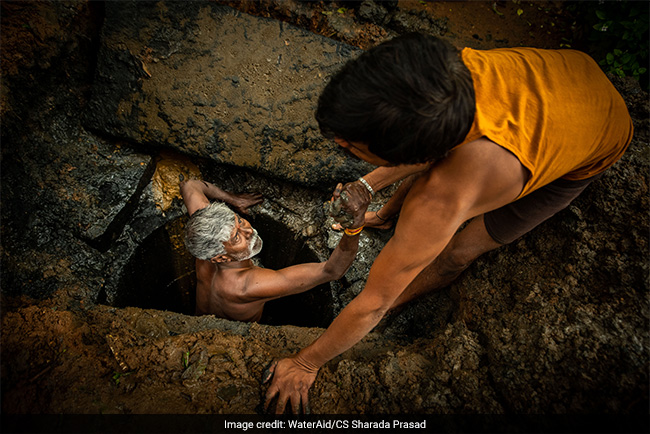 Kaverappa, who has been emptying pits for almost 35 years, being lifted out of a pit by a co-worker

Despite providing an essential public service – safe sanitation which involves cleaning toilets, public places, septic tanks, sewers, manholes, managing different kinds of waste, and even emptying toilet pits manually, sanitation workers are often discriminated and not given equal status in society. While working towards providing safe sanitation to the majority of us, these workers are exposed to toxic gases such as ammonia, carbon monoxide, and sulphur dioxide which directly impacts their health.

According to Bezwada Wilson, founder of Safai Karamchari Andolan (SKA), an organisation working towards eradicating manual scavenging in India, over 2.6 lakh women are involved in dry latrine cleaning, and around 7.7 lakh men are involved in cleaning sewers and septic tanks. As the inhuman practice continues, WaterAid India takes a closer look at the life and work of sanitation workers, through a photo exhibition ‘The hidden world of sanitation workers’. 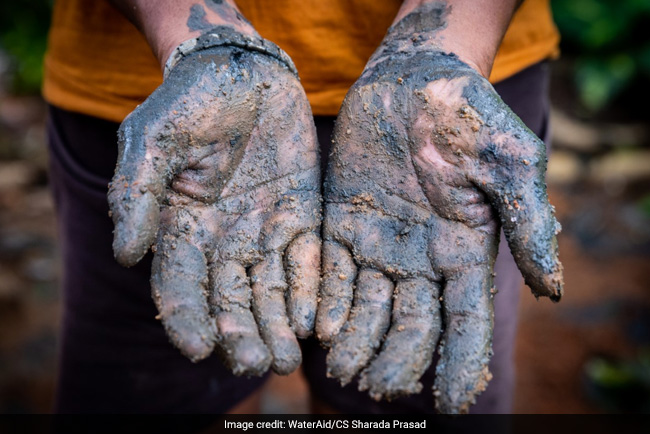 Hand’s of 37-year-old Muniraju, after manually emptying a pit, in Bengaluru

The visual narrative has been put together by CS Sharada Prasad, an Assistant Professor at Azim Premji University, an engineer turned into a social scientist researching on sanitation access in low and middle-income countries. The exhibition has 140 photographs profiling 10 sanitation workers from Bengaluru, Hyderabad, Delhi and Dharwad in Karnataka.

Talking to NDTV about the exhibition, CS Sharada Prasad, says, 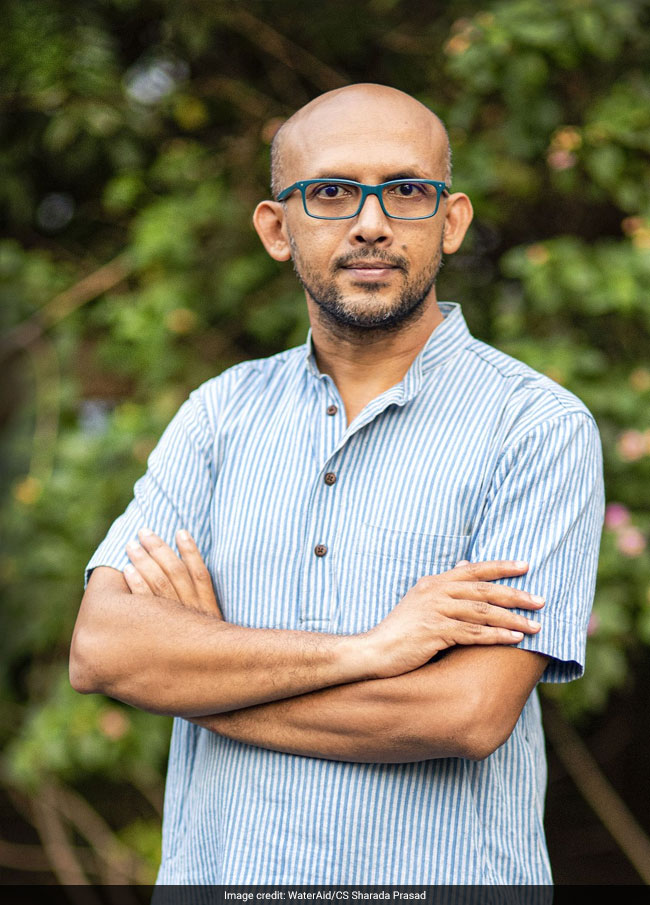 People know this job is done, but they don’t want to see it and that is why they don’t understand the spectrum of this job. Everytime they see someone going inside the manhole or sewer and bringing out buckets of waste, they close their nose, make faces and simply walk away. This photo essay is a way to zoom in to the lives of sanitation workers. My intention is to make sanitation workers visible to the society, how they provide an important service to the society and why do they continue to do this while the world around them does not even recognise their contribution.

Through his lens, Sharada has dived into the world of sanitation workers and had tried capturing the essence of their daily life and degrading work they are forced to do.

Also Read: Fighting To Abolish The Dehumanising Practice Of Manual Scavenging, Bezwada Wilson Says ‘No One Should Clean Excreta By Hand Just For Roti’

What Is The Reason Behind Current Status Of Sanitation Workers In India?

The pits can be emptied using mechanised trucks but there are places where there is little to no space for trucks to go and perform the job. Under such situations, people like Kaverappa open the pit and empty the contents using a rope and bucket followed by Kaverappa getting inside the pit and clearing the sludge deposited at the bottom. 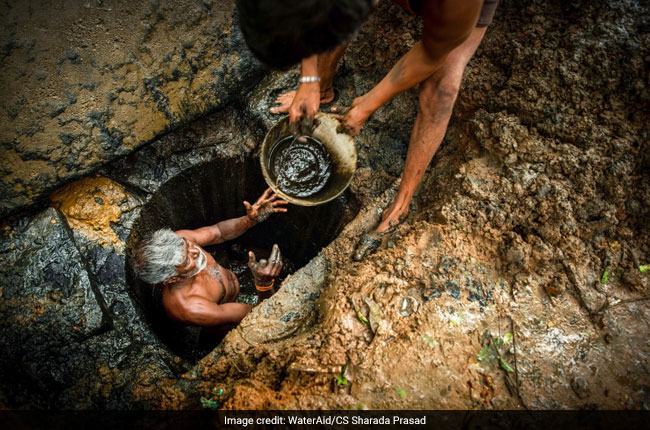 Similar is the story of Venkat Swamy working in Bholakpur, Hyderabad, where blockages inside the houses are very common because of sanitary pads, wet wipes, fatty food and oil flushed down the sewers. 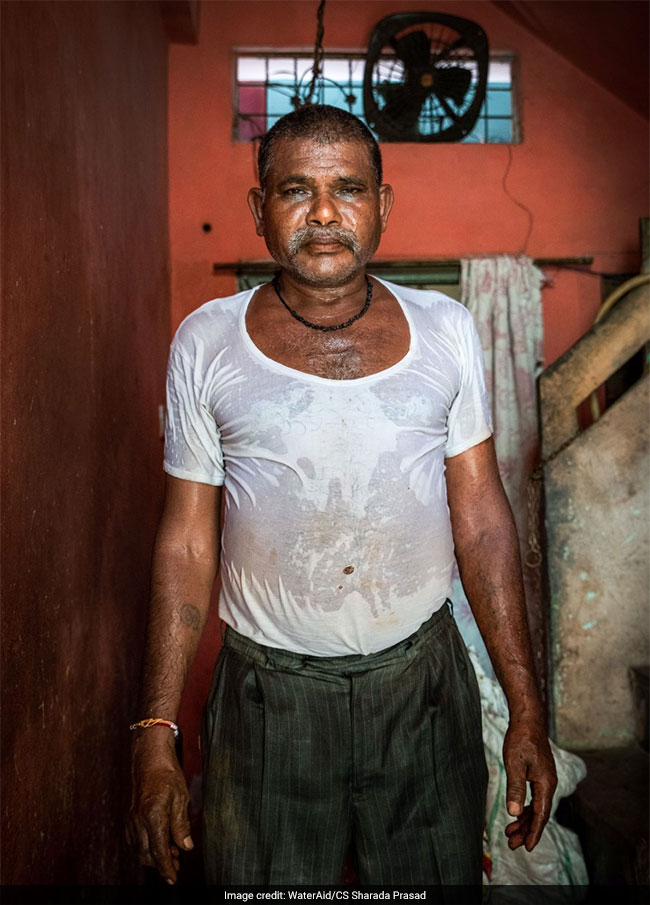 It’s a neighbourhood with very narrow streets and most of the houses have common walls. Networks of sewers run through the houses, under bedroom and living rooms, opening into tiny courtyards and even kitchens. Whenever I go to resolve complaints received from the water board, I just put my hand through whatever there is and fix the problem. I don’t care. I just use my bare hands. I always return home nice and clean. No one can suspect that I clean sewers. People judge you, you know, says Venkat Swamy. 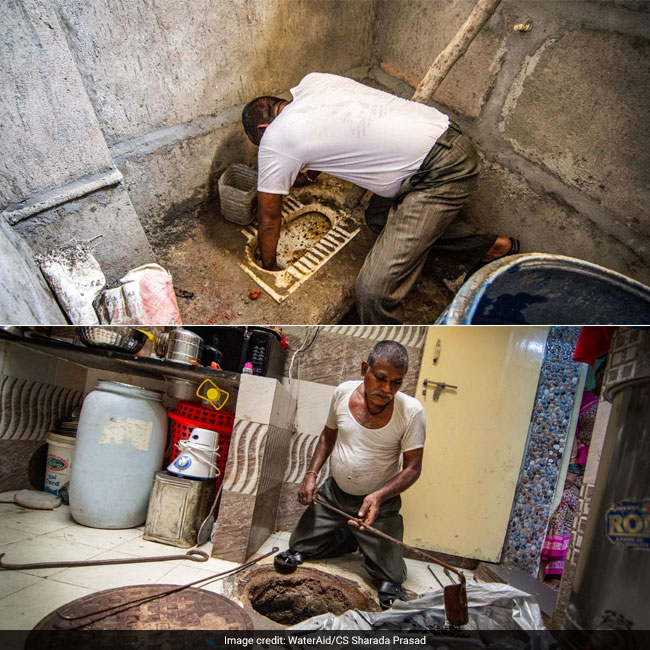 How Can Government Help Sanitation Workers Lead A Dignified Life?

In India, several cities like the national capital Delhi have introduced mechanised trucks to fix major blockages involving rocks, plastic, scrap cloth and other waste material and for servicing of sewers. Mechanised trucks have a 120 foot long jetting hose connected to it which travels inside the narrow lanes. Along with cleaning deep manholes, it can clean the sewerage and bring the silt, sewer slug and other waste out to a trolley. 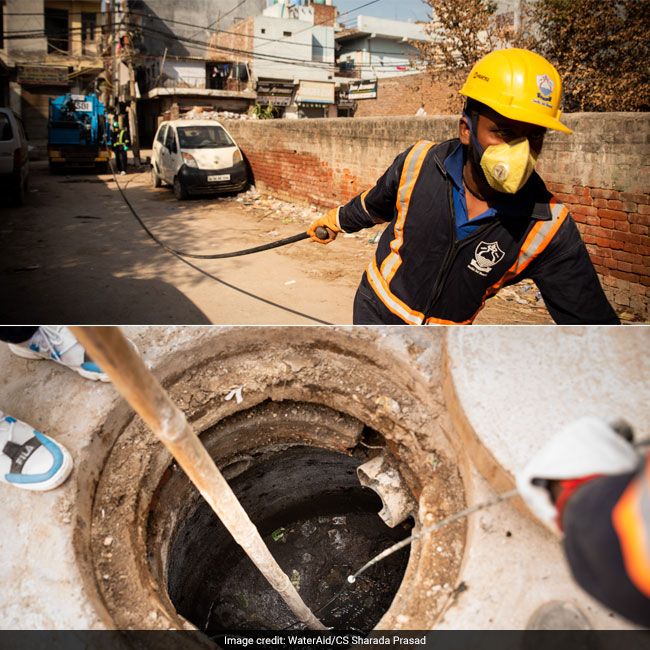 The efforts of Delhi are a very tiny slice of sanitation work. Why mechanisation has not spread? Why is there no rehabilitation of sanitation workers? There is no political to stop humans from going inside the sewers. We are not creating opportunities for them. Central government makes laws but it is the responsibility of states and cities in terms of identifying and rehabilitating these workers. Sanitation work is still linked to people of a particular caste. Our right to sanitation is coming at the cost of their right to life. The laws need to be translated and awareness is required, signs off Sharada.