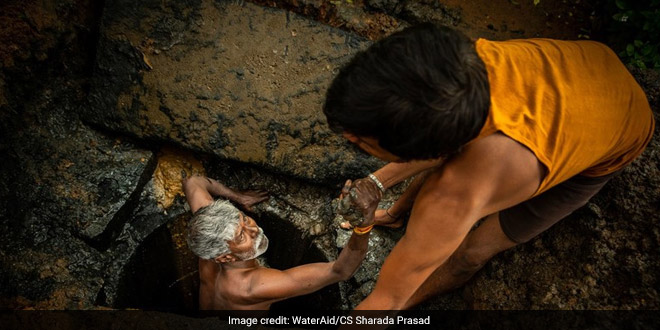 New Delhi: “The primary reason to get into the manhole is to remove the blockage. Blockage is usually caused by rocks, plastic bags, mix of cloths or other trash. One has to be very careful about unblocking deep sewers because a lot of times when someone goes in, they may not come back, or come back with incapacitating infections” says Somappa, 52 years, who has been working as a manual scavenger for almost 30 years. Like Somappa, millions of sanitation workers in India are forced to work in conditions that endanger their health and lives, according to a report recently published by WaterAid India in collaboration with the International Labour Organisation, World Bank and World Health Organisation (WHO).

The harshest realities are that even today, the age-old stigmatised caste system remains to be the key determinant of the fate of these workers. As a result, communities mainly belonging to the lowest rungs of caste system in India are compelled to continue performing these tasks, which are not just hazardous and stigmatising but also highly underpaid. The sanitation workers mostly carry out their job with no equipment, protection gears and they have no awareness about their legal rights.

The practise of manual scavenging was banned in 1993 with the Employment of Manual Scavenging and Construction of Dry Latrines (Prohibition) Act and again in 2013 with the Prohibition of Employment as Manual Scavengers and their Rehabilitation Act (PEMSR 2013). The research shows that only 26 per cent of sanitation workers reached out to were aware of the PEMSR 2013, and only 20 per cent were aware that manual scavenging is prohibited by law. 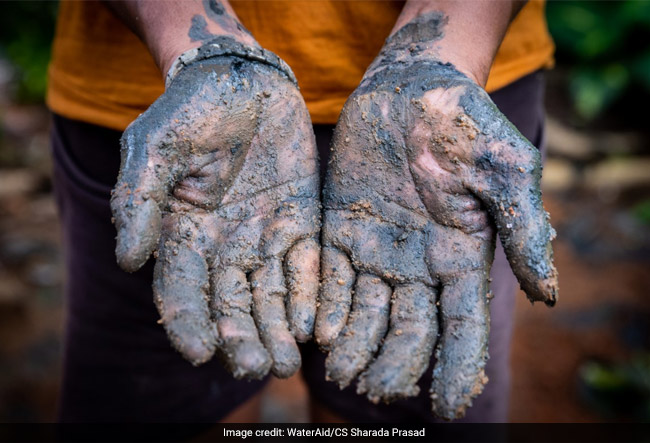 Vast Majority Of Manual Scavengers Not Included In Government Surveys

According to WaterAid, sanitation workers are the men and women who work at any part of the long sanitation chain that begins when one goes to the toilet or leave other wastes out, and ends when waste is disposed of or reused. Nevertheless, the sanitation workers are often invisible, finds the report. It further says that the names of a vast majority of manual scavengers are not included in government surveys that aim to identify manual scavengers for to provide them benefits of government schemes related to rehabilitation, alternative employment, and children’s education. National Safai Karamcharis Finance and Development Corporation (NSKFDC) which is the implementing agency for the scheme on rehabilitation of manual scavengers, reports that 54,130 manual scavengers have been identified till now since 2013. However, according to the 2011 census data, manual scavenging is still the primary occupation of over 1,80,000 Dalit families.

Violence, Untouchabilty, Injuries And Even Death Are Part Of Job Description For Sanitation Workers

The report reveals that about 36 per cent of the manual scavengers covered in the study said that they experienced violence while 50 per cent of them experienced untouchability and discrimination. The sanitation workers are hardly given any protective gears to help them avoid injuries because of this, sanitation workers suffer repeated infections and injury. When asked about injuries Somappa said,

Injuries are common in our work. Sludge sometimes has broken glass, blades and needles. Moving heavy granite slabs or climbing up and down the pits can also cut our hands and feet. I work with bare hands and feet. When I have a cut, I tie a plastic bag around my hands or feet and continue to work. 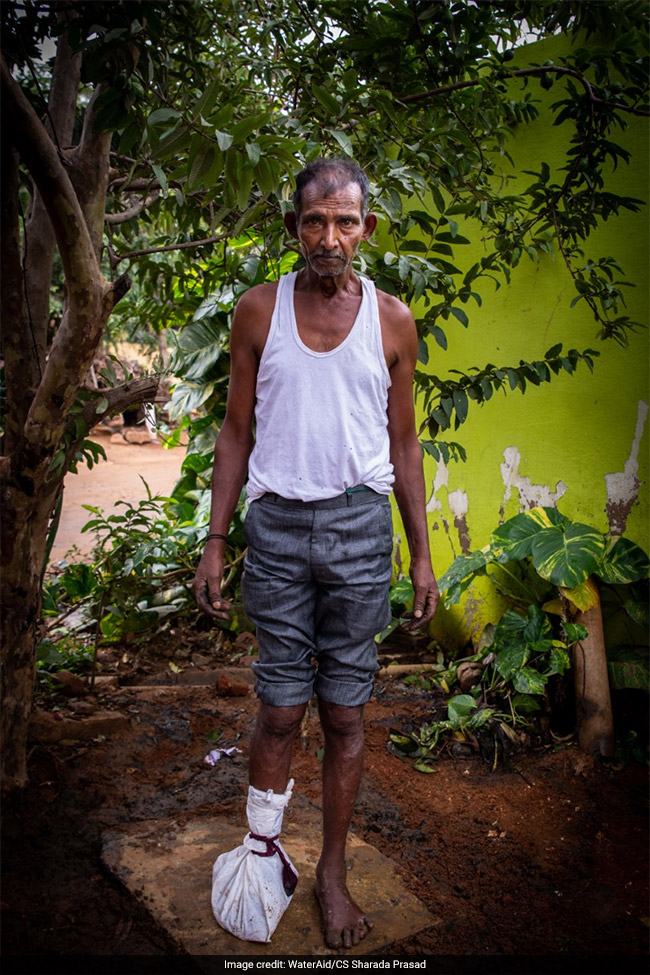 Somappa, 52 years, uses a plastic bag to protect a wound on his foot from getting infected

Meenadevi, 58, who cleans dry latrines in a village named Dehri-on-sone in Bihar, said that she used to feel nauseated initially when she started the work but now she has gotten used to the fouls smells and constant headache. She said,

Poverty leaves you with no option. With the amount of discrimination we face, what else can we do to feed our stomach? Give us another job and we will leave this one immediately.

According to the report, mostly, manual scavengers get into the manholes and large sewer lines wearing only a safety belt and as soon as the block is removed, the deep sewer starts to fill up immediately and worker sometimes drowns if he does not get out in time. Another risk is not being able to come out of the manhole in time when the poisonous gas such as ammonia, carbon monoxide and sulphur dioxide in septic tanks and sewers hits them.

What Can Be Done To Alter The Current Situation Of Sanitation Workers?

The report highlights four areas of action to address the situation of sanitation workers. First, it calls for policy reforms to acknowledge and professionalise the sanitation workforce using technology; second, to develop and adopt operational guidelines to assess, and mitigate the occupational risks of all types of sanitation work; third, advocate for sanitation workers and promote their empowerment to protect worker rights through unions and associations; and fourth, to build the evidence base to address the issues of documentation of challenges workers face.

The report recommends increasing the use of machines in cleaning of the sewers. It says that with mechanised trucks that have jetting hose as long as 120 feet long, and rodding machines to break blockages, the sanitation workers will not be required to enter the sewers and work that used to take 5-6 hours can be done in under an hour. The sanitation workers must be provided with safety gear such as helmets, masks, goggles, uniforms and boots. Mr. Raman said,

Governments at different levels should identify and deploy new and improved measures and assistive technologies for ensuring sanitation and cleanliness in our urban and rural areas, ensuring decent work, safety, health, dignity and equity of the workers involved. Facilitating current sanitation workers and their families to own and run most of the technological alternatives can lead them to a better life as well.

With the help of the findings of the study, WaterAid India will be advocating for the need of stringent measures to abolish all possible direct human interface with any faecal matter, Mr. Raman added.

The report also highlights that improving the working conditions of sanitation workers would contribute to atleast four of the 17 Sustainable Development Goals (SDGs). These are- SDG 1 to end poverty in all its forms everywhere by promoting access of the poor to basic services; SDG 3 to ensure healthy lives and promote well-being for all at all ages by reducing exposure to unsafe chemicals on the job; SDG 6 to ensure availability and sustainable management of water and sanitation for all; and SDG 8 to focus on decent work.

Deprived Of Toilets For The Longest Time, Residents Of Ludhiana In Punjab Witness A Sanitation Revolution