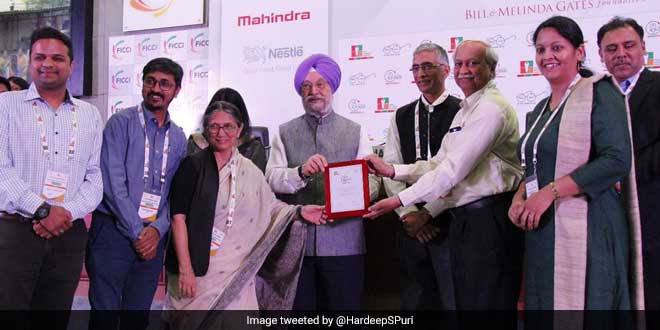 New Delhi: ‘Swachh Bharat Abhiyan – a sanitation revolution will leave its impact in India’s history. The government is confident that the target of going open defecation free by October 2, 2019, will be met and it will be before the deadline,’ says Secretary Ministry of Drinking Water and Sanitation Parameswaran Iyer while addressing the 2nd India Sanitation Coalition (ISC)-FICCI Sanitation Conclave and Sanitation Awards at FICCI today. Minister of State for Housing & Urban Affairs, Hardeep Singh Puri who was also present at the event reiterated the same fact, he added, “Swachh Bharat Abhiyan is today in everyone’s conscious decision. People respect the campaign, appreciate the efforts and the numbers are a proof of the campaign’s success. I am confident that the target will be achieved, that too before time because I can see the ground level changes, I can see today how the campaign is lifting lives of millions and millions of people.”

There's ample evidence that Swachhata has become a Jan Andolan.From being a project of the govt. it has become a project of the people. This was on display during the ISC-FICCI Sanitation Awards where corporate houses & individuals put their best foot forward for @SwachhBharatGov pic.twitter.com/IHUNOm16h5

Sharing the numbers on how the swachhta movement has made huge strides over the years in the rural parts of India, Parameswaran Iyer said that the sanitation coverage has increased from mere 39% in 2014 to 83% now. He also added that the government has been successful in building more than 7 crore toilets. There are 16 states and UTs which have become ODF and by October 2, 2018 the government is confident that this number will move up to 25.

As of today, 16 states / UTs are Open Defecation Free. By October this year, these will be 25 states / UTs.

Talking about the impact of the Swachh Bharat Abhiyan, Mr Iyer added,

Today, India has more than 4 lakh swachhgrahis and we are aiming at getting one swachhgrahi in each of the villages.

From rural to urban parts of India – Hardeep Singh Puri said that the government has a target of building 67 lakh household toilets and 5 lakhs public toilets before October 2019.

As of March, we have successfully built 52 lakh toilets and 3.2 lakh community toilets. We are well on the way to achieving those goals but the heart of the issue is behavioural change. We will always be vulnerable if there is some deficiency in behavioural change that is required to make it a project of the people.

Sustaining the ODF status is seen to be the next big challenge for the Swachh Bharat Abhiyan.

We are all seeing how Swachh Bharat Abhiyan is going big day by day, but the real challenge starts now for the government – we all need to work towards sustaining the ODF status. We as an organisation ensures that we will support the campaign in whatever ways we can, adds Rashesh Shah, FICCI President.

It is not just about building toilets, the important part is to sustain that behaviour of an individual so that he/she continues to use a toilet. Sanitation is central to an individual’s and country’s health, we are happy to see how the government is shifting its focus on ensuring areas that have eradicated open defecation move towards getting the ODF (s) or ODF Plus status, said Naina Lal Kidwai, Chairperson, India Sanitation Coalition.

On his part, Mr Iyer assured that te government is mindful of this challenge and is working towards it.

Talking about how the government ensures that people are using toilets or not – we are doing a lot of verifications and surveys to figure this out. Recently only a third party verification survey was done with the support of World Bank, it highlighted that there are 93% of households that are actually using toilets. In future, we will have more such surveys because our focus is not on construction but on sustaining and bringing about a behavioural change – and let me tell you, that’s not an easy job. We are making a good progress, but, there is a lot that needs to be done.

Hardeep Singh Puri also emphasised that the UN Sustainable Development Goal-6 by 2030 of ensuring access to water and sanitation, will be achieved mainly through the collective effort of all and are being supplemented by the programs being implemented by the government such as Swachh Bharat Mission.

In the next one year, the government’s plan of action is to fulfill the target of the Abhiyan as announced by Prime Minister Narendra Modi at the launch – a clean nation that is open defecation free by October 2, 2019. Though the primary focus is to achieve that target, but in the coming days a lot is expected to be done towards Open Defecation Free Sustainability and Open Defecation Free Plus programmes through which the government will ensure coverage in terms of solid waste management, improved sewerage lines, stormwater drains and pucca cement roads.