New Delhi: ‘Weddings in India are synonymous with wastage and we wanted to change this reality,’ with this as their intent, two best friends and graduates of National Institute of Fashion Technology (NIFT) from Chennai decided to embark on a journey to make weddings sustainable. 21-year-old Sudarshana Pai and 23-year-old Veena Balakrishnan consciously made a green switch in their own lives first and then thought of choosing a career path that will inspire others to go green. The route they decided to choose for going green was – ‘Let’s change how India celebrates weddings’.

In April this year, Sudarshana and Veena started ‘Two’s Company’ with an aim to plan events and weddings in India that don’t adversely harm the environment. 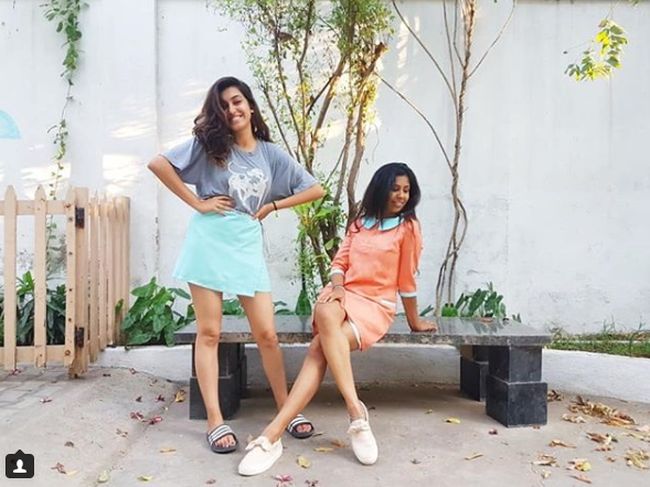 Meet the waste warriors from Chennai, who are doing their bit for the environment

Talking to NDTV about their journey, Veena said,

The concept of sustainable living is well-known in the West but in our country, not many know about the same. From the time we wake up to the time we go to sleep, everything we use is covered in plastic. And the green alternatives that are available in the market are very expensive. And that’s what we wanted to change. We wanted to show people, sustainable living can be both fun and inexpensive.

Explaining how they make sure the green initiative is inexpensive, the duo added,

If users are using a plastic bottle in their wedding and spending Rs 9 on each bottle, they will surely not like to spend Rs 50 on an eco-friendly alternative available in the market, and that’s when we come into the picture. In today’s day and age, no user got so much time to do the research and come out with a cheaper alternative. We look out for the best suitable option within the area or the market at a cost effective price and swap the non-ecofriendly item with the green product accordingly.

The start of their joint venture coincided with Veena’s own wedding. The duo decided to use the wedding to both showcase the possibilities and kick-start their green initiative.

The concept of the zero-waste wedding is not that you don’t use any fancy or beautiful things in your wedding, instead, it is about treating whatever amount of waste is generated effectively, so that zero waste reaches the country’s overflowing landfills. Commonly, in one wedding, around 2-3 truckload of waste is generated, and if we don’t treat it effectively, it ends up reaching the garbage dumps or the landfills. As a result, today most of our landfills are overflowing way past its limits, adds Veena.

Also Read: Heard Of Jewellery From Waste Items? These Two Women Innovators From Bengaluru Are Doing Just That

All About Eco-friendly Weddings 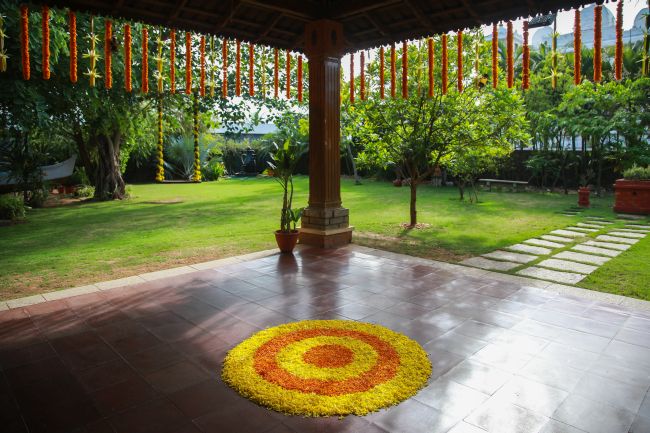 Zero-waste wedding decor: Only seasonal flowers at the wedding were used, which later was converted into fertilizer

Starting with electronically sent invites to a venue that was conducive to what they wanted to achieve and décor keeping in mind easy disposal post-event – Veena and Vignesh’s wedding also made sure that all the waste generated is treated effectively.

Moreover, instead of splurging on expensive wedding costumes and jewellery that many of the brides don’t even use again, Veena chose to don her grandmother’s saree and jewellery which she wore on her special day 50 years ago. 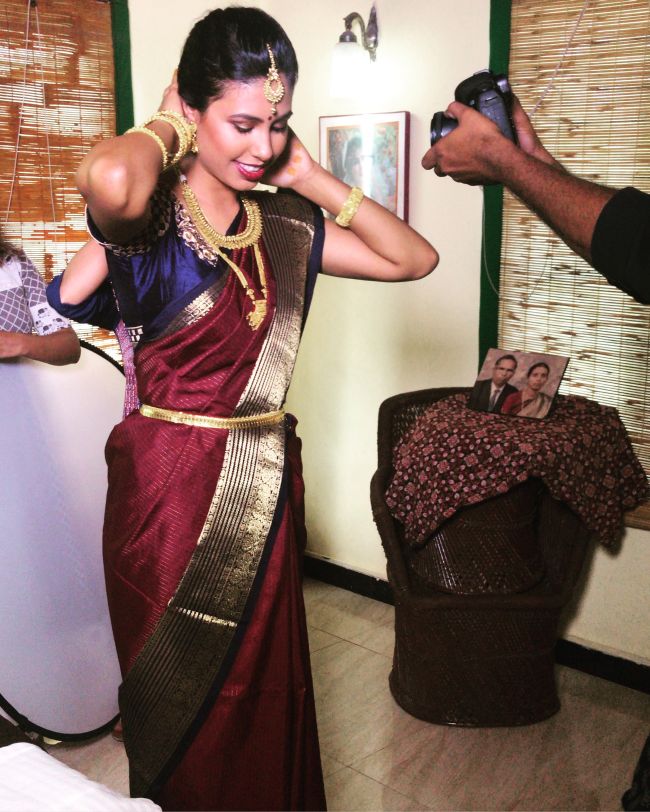 Meet the bride of an eco-friendly wedding – Veena Balakrishnan

The wedding took place in a well-lit open garden lawn which required very less decorations and electricity. For the decorations, native seasonal flowers were chosen instead of fancy plastic decorative items, food was served in banana leaves and instead of using disposable plastics, steel cutlery was used. 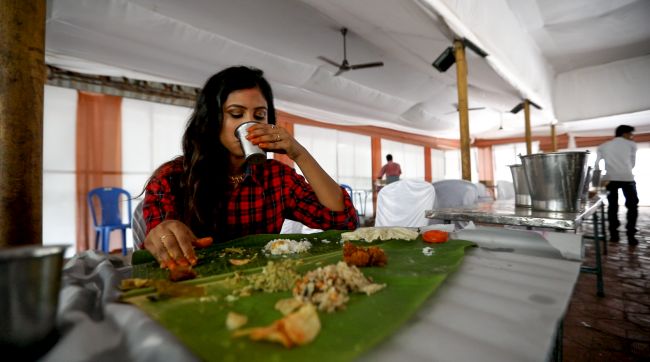 No single-use-plastic cutlery was used during the wedding. The guests enjoyed food served in banana leaves

Talking about the difficulties the duo faced while sourcing everything for the green wedding, they said,

It was extremely difficult to find steel glasses to serve 700 guests at the wedding. Today, everyone has shifted to plastic, nowadays people rely on small plastic water bottles instead of glasses. And, that is when we realised going green isn’t an easy task.

Along with these green steps, Veena and Sudarshana came up with the idea to manage food wastage during the wedding, they decided to distribute excess food to the poor. For this, they teamed up with Robinhood Army, a renowned non-profit organisation in Chennai that routes surplus food from restaurants to the needy people. 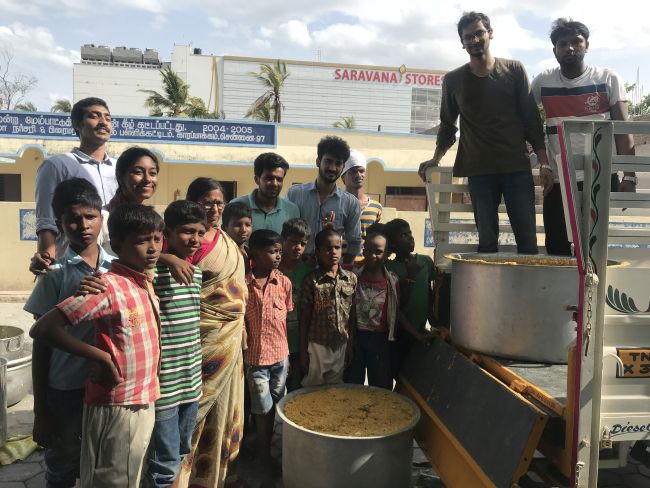 To stop food wastage during the wedding, the duo decided to distribute excess food to the poor. For this initiative they had teamed up with Robinhood Army

Explaining how the other waste was managed, Veena said,

We distributed the wedding waste in three groups – organic waste which included all the decorations and leaves, this waste was given to an NGO named as Restore, they helped us create fertilizer out of the waste. While all the vegetable waste, used banana leaves, areca plates and rolling paper were used for composting. Moreover, plastic bags which our guests brought to give gifts, were also collected and given to a local scrap dealer.

Even the wedding return gifts were given keeping in mind the green initiative. The gift box comprised of a scrub made out of filter coffee collected from local cafés, along with Thank You cards made out of seed paper that on disposal can turn into saplings, were given. 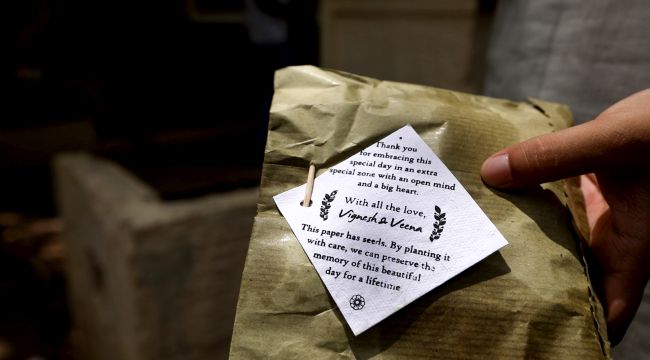 That’s eco-friendly gift box – In it is a scrub made out of filter coffee collected from local cafés, and a Thank You card made out of seed paper that on disposal can turn into a sapling

After experimenting with the green idea at Veena’s wedding, currently, the duo is working on three more projects, one in Bengaluru and two in Chennai and is looking forward to come up with an e-commerce platform where they will help people go green with all sorts of products at a low cost.

Our ultimate motto is to tell people that it is possible to live in a sustainable way. In fact, it can be done in a fun and inexpensive way. The duty to save the planet lies on our shoulder thus it is necessary for all of us to start thinking of ways in which we can contribute towards the environment, signs off the waste warriors.

You can watch the zero-waste wedding video here, it has been documented by Sudarshana and Veena’s friend, Yash Suda.

Plastic Waste: A 7-Year-Old Boy From Ludhiana Is On A Mission To Fight Against Single-Use Plastic