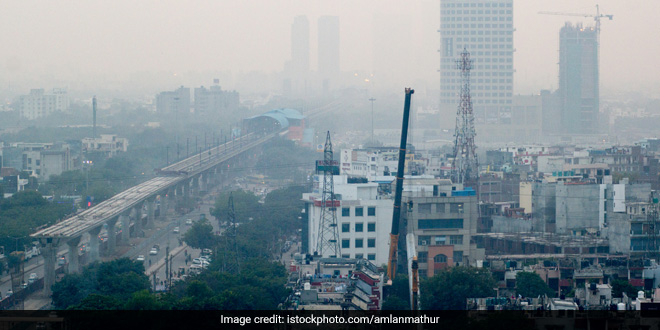 New Delhi: The Supreme Court Wednesday questioned the Centre why most of the pollution under control (PUC) centres in Delhi were either not working or were to be closed down and observed “what kind of pollution control are you doing”. A bench of justices Madan B Lokur and Deepak Gupta asked this to the Centre after perusing a status report filed by the government. Additional Solicitor General (ASG) A N S Nadkarni, appearing for the Centre, told the court that meetings were held on comprehensive action plan (CAP) which was aimed at tackling air pollution in Delhi-national capital region (NCR).

Advocate Aparajita Singh, who is assisting the court as an amicus curiae in the air pollution matter, said the whole idea of the CAP was to treat entire NCR as one and the implementation of this action plan was the “biggest nightmare”. She said the Environment Pollution Control Authority (EPCA) could sit with the authorities and tell the court about the roadblocks in the implementation of CAP. The ASG then told the court that he would come up with a better updated status report within three weeks.

You identify the problems and then see how to deal with them. You have closed down so many PUC centres. What is the alternative you have, the bench told the ASG.

During the hearing, the bench also dealt with the issue of traffic bottlenecks in Delhi and also on decongestion of police stations here. ASG Pinky Anand, appearing for the Delhi Police, said that as per the apex court’s order, they had identified 165 tasks in 30 congested traffic corridors under ‘B’ category and 105 tasks in 18 such corridors in ‘C’ category for ensuring smooth flow of traffic in the national capital.

She said a policy on decongestion of police stations in Delhi by removing seized and impounded materials and vehicles was formulated and it would be circulated. The bench noted that in its earlier affidavit, the police had said they had identified 350 tasks for decongesting 28 “highly congested (traffic) corridors” in Delhi which fell under category ‘A’.

The ASG told the court that with regard to 58 tasks, they have not received any timeline from the agencies involved in the work. The bench directed the police to apprise it about the status as on December 31 with regard to tasks identified under categories ‘B’ and ‘C’. It said the issue would be taken up for hearing in January.

The police also told the court that as far as appointment of district ‘nazir’ (record keeper of a malkhana) in each revenue district was concerned, a letter was written to the Principal Secretary (Home) of the Delhi government with a request to expedite the process. Meanwhile, the counsel representing the Delhi High Court told the court that district ‘nazir’ were there in all the 11 districts in the judicial side.

The bench also dealt with the issue of having a centralised registry in trial courts to handle miscellaneous matters filed by the police for disposal of seized vehicles and other materials lying at the police stations. The high court’s counsel said that centralised registry was already there in district courts and perhaps the police was not using the same. However, the ASG said that she would verify this.

The idea was that the disposal of seized items should be as quick as possible. This is just passing the buck that unless you give me space, I will not do anything, the bench said.

The court then referred to the affidavit filed by police and asked the ASG, “How much seized liquor you have got? It (affidavit) says that over eight lakh litres of liquor is seized and kept by the police.” The bench then asked why the seized liquors not be destroyed, if it was not required for any other purpose. The ASG told the court that the liquor had to be kept as case property. The bench said that offence related to seizure of liquor was mostly compoundable and these could be compounded.

The bench also referred that as per police, there were around 40,000 seized vehicles and asked if any application was moved in the trial court by police for their disposal. The apex court was hearing a matter relating to air pollution in Delhi-NCR.

Also Read: Delhi Airport To Become Plastic-Free By The End Of 2019