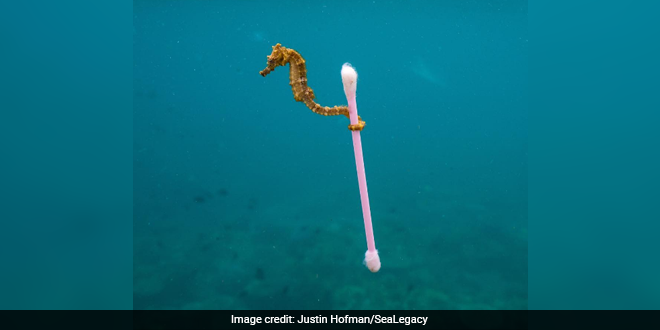 It is a photograph he wished did not exist, but then decided that the world needs to see it. And now that the world has, it cannot get over it. A 33-year-old California-based nature photographer Justin Hofman is winning international acclaim for a photograph of a tiny orange seahorse clinging on to a pink plastic cotton swab in blue-green waters around Indonesia. That one frame summarises the condition of oceans and the existential crisis that the planet itself is going through. Nominated as a finalist in the Wildlife Photographer of the Year competition, Mr Hofman, who spends a lot of time underwater to capture marine life, named this photograph, “Sewage Surfer” and defined it as an “allegory for the current and future state of our oceans.” He not only captured the seahorse and its unnatural vehicle, but also the murky water filled with debris.

“It’s a photo that I wish didn’t exist but now that it does I want everyone to see it,” Mr Hofman wrote on his Instagram post which has been liked by over 21 thousand people so far. This incredible image has gained incredible traction on the Internet and has prompted emotional responses from people across the globe calling it a “beautiful yet heartbreaking” and “eye opening” that illustrates a “disgusting” reality. Notably, some of the users from Indonesia through their comments also acknowledged that their country has a problem with plastic pollution.

“Indonesia is known for having the broadest selection of marine biodiversity in the world. But the country is also second only to China in its contribution to marine plastic – fuelling the growing concern that unnatural ocean waste could outweigh fish by 2050,” reads the description of the photograph on the entries for London’s Natural History Museum’s Wildlife Photographer of the Year, for which Mr Hofman is nominated.

According to the United Nations, Indonesia has pledged that by 2025, it will reduce the amount of waste being discharged into the ocean by 70 per cent. In this regard, Indonesia will launch its National Action Plan on Marine Plastic Debris that contains numerous strategies and concrete plans that cover land, coastal areas, and sea to reduce marine plastic debris and a roadmap for trash-free Indonesia. Furthermore, Indonesia will also integrate the issue of marine plastic debris into the curriculum of its national education, reports United Nations.

When asked about how bad is the problem of marine trash, Mr Hofman told NDTV, “It’s astounding.” He stated that he has sent remotely operated vehicles and submarines hundreds of feet underwater and found plastic in the most remote places on Earth.

Ocean currents are incredibly strong and travel thousands of miles, so rubbish dumped in one place is likely to show up very far away from its origin. This is not the problem of one country, this is a world-wide problem and a positive outcome will affect all nations, he further added.

While speaking about how marine animals interact with plastic debris, Mr Hofman said, “Sometimes animals use the garbage as a house or something to hide in, and that almost becomes endearing, but in reality this is a very bad situation. The more the animals interact with our waste, the more likely they are to ingest micro plastics, industrial chemicals, and waste. If you think about it, why would only the ‘clean’ trash drift around the ocean? Harmful pollution can do the same thing.”

While working on his assignments with EYOS Expeditions and SeaLegacy, an organisation which aims to propel people to take action to protect oceans, Mr Hofman has seen killer whales in Puget Sound (coastal area of the Pacific Northwest in United States) becoming less healthy every year because of industrial runoff that brings them in contact with heavy metals.

Also Read: Say No To Plastic: Here Are 5 Simple Ways To Cut Down Plastic Usage

“Combine this with overfishing of their prey items and you have a disaster scenario. Other animals like dolphins and whales ingest plastics because the echo signature of a plastic bag is very similar to their preferred prey item,” he said.

He further stated that in the tropics (regions of the Earth that lie roughly in the middle of the globe) he has seen Manta rays feeding along current lines because this is where their planktonic prey gets concentrated, unfortunately this is the same for plastics and waste. “I have seen Manta rays getting plastic bags caught in the mouth, gills, and throats. It’s pervasive and it’s heartbreaking,” he further added.

Speaking about how he feels about this photograph being the finalist in the Wildlife Photographer of the Year competition, he said, “I am amazed by the response. Because it’s a conservation photograph and I won the Internet with this, so that’s what really matters. I have spent the last week glued to my computer and phone to answer as many messages and emails as possible because spreading the message of (marine trash) behind this image is very important to me. I live and work on the ocean with wildlife. It is literally my life.”

When asked about the ever-growing problem of marine trash and what steps people and governments across the globe should take to tackle it, Mr Hofman said, “As population grows, especially in the developing nations, we are going to have more and more trash production. I think it is so important to educate youth on how to be a responsible steward for the Earth and for each other.”

If we start teaching kids when they are very young how important it is to have a clean environment then we are literally investing in our future. I live in California and we have some of the strictest laws for air and water quality and I hope that other states and countries take some of this into account when they are making policies. I stay out of the politics, but I think it’s clear that something has to be done from within to change how policy-makers view the environment. It is not for a short-term profit, he further added.

Justin Hofman took this compelling photograph – now a poster child for marine trash crisis – with a Sony a7rii, 16-35mm lens, in a Nauticam housing using Sea and Sea strobes. He explains that his friend pointed out the sea horse, which was holding onto a piece of seaweed and drifting with the current. “When the tide came in, the debris came in with it, and the seahorse hopped from the seaweed to a little piece of plastic and then a cotton swab,” he said.

Notably, the white blurry spots in the photograph’s background are actually bits of plastic drifting around. The photograph has beautifully presented the fact that we are drowning the oceans in plastic and not even paying much attention to that.

No Swachhta In India’s Seat Of Power – Raisina Hills

In This Village Of Madhya Pradesh, The Panchayat Has Fined A Family Rs 75,000 For Defecating In The Open