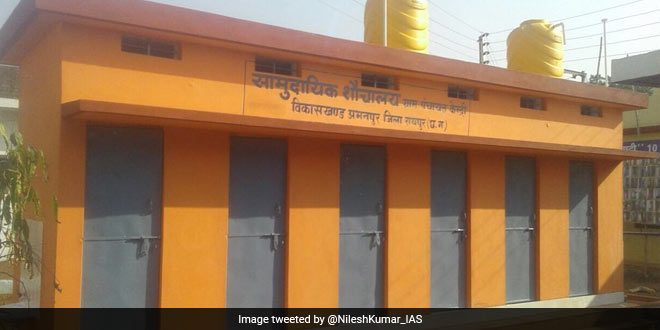 New Delhi: With the aim of achieving the target of open defecation free (ODF) India by 2019, states are racing towards it. In this run, states are leaving no stones unturned. Every day some or the other state, village or district is declared ODF and many other are on the way to become ODF. To join this list is Chhattisgarh’s district, Raipur district which was declared ODF by Gram Panchayat on December 21, 2017.

Confirming Raipur District’s ODF status, Parameswaran Iyer, Secretary Ministry of Drinking Water and Sanitation shared the news on Twitter. He urged people to keep the momentum going as together we can achieve an ODF nation by 2019.

Let’s keep the momentum going. Raipur district in Chhattisgarh has been declared #OpenDefecationFree. Together we can all achieve an ODF nation by 2019. @swachhbharat pic.twitter.com/KhkVHDwR6E

At present, the gram panchayat has made the announcement, but the state will declare Raipur District as ODF on January 26, 2018. Currently, verification by the state which is a 2 tier process in underway. First is at the inter-block level and the other one is at the state level, says Nilesh Kumar, CEO, Zila Parishad, Raipur District, Chhattisgarh.

It took Raipur District two years to be declared ODF though 80% of the toilets were constructed by the people only.

In our district, people demanded of toilets. It was not like we constructed toilets for the sake of construction or to declare Raipur District ODF. It was a demand oriented model and not a construction oriented, says CEO Nilesh.

Women have played a major role in ensuring that Raipur District goes ODF. They not only helped in spreading the message of Swachh Bharat Abhiyan and how important it is to have a toilet at ones place, but also in ensuring that people are using the toilets constructed by the government.

To keep a check on the usage of toilets, Gram Panchayat formed groups of women, children, and men. Along with Children, the women were seen participating actively. They kept a careful watch on open defecation and helped us in declaring the district ODF, says CEO Nilesh.

The Swachhta revolution in Chhattisgarh has been in full swing since the inception of Swachh Bharat Abhiyan in the year 2014. While the urban areas of the state attained ODF tag this year, the announcement for which was made during Rashtriya Swachhata Diwas on October 2, rural areas aim to achieve the ODF tag by October 2018.

Toilet construction has been possible because of community participation and usage of toilets depends on behavioural change. If we look back, three years ago, open defecation was a common practice, but now people have moved over it. Now it is not something we get to see on a daily basis which is good. But we have a long way ahead. Swachh Bharat Abhiyan needs to come up as a movement, signs off CEO Nilesh.