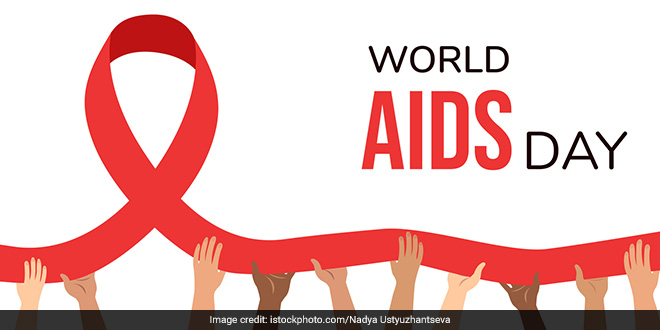 New Delhi: Every year on December 1, people around the world mark World Aids Day to raise awareness about the symptoms, causes, and preventative measures of HIV/AIDS, which has claimed an unprecedented number of lives. The red ribbon, worn by people all year in remembrance of those who have died due to the disease, is perhaps the most recognizable symbol of AIDS awareness around the globe. It is quite interesting to understand why a red ribbon was chosen to serve this purpose.

While some feel it is used to represent love for everyone who has HIV-positive results, others believe it is meant to express the helplessness of those in suffering, and because it is mainly transmitted through blood, red fits the best. However, the history of this symbol starts from the year 1988, when as a reaction to the consequences of AIDS on the arts community and as a means of mobilizing artists, arts institutions, and arts audiences towards direct action on AIDS, art professionals created a group called Visual AIDS.

Some of these Visual AIDS artists came together three years later, in 1991, to design a visual symbol to demonstrate compassion for people living with HIV and their caregivers.

After being inspired by the yellow ribbons worn by American soldiers participating in the Gulf War, the artists decided to make a red ribbon to represent support and solidarity for those living with HIV and to remember those who have died from AIDS-related illnesses.

According to the website of UNAIDS, a Switzerland-based non-government organization, the reason for choosing the color red was its, “connection to blood and the idea of passion — not only anger, but love, like a valentine,” the Project founders said. The project was to become known as the Red Ribbon Project. The Red Ribbon Project volunteers banded together that year to send letters and red ribbons to every Tony Awards attendee in the USA. It was here that actor Jeremy Irons was seen as a red ribbon pinned on his lapel on national television.

Also Read: World AIDS Day 2022: A Look At This Year’s Theme And Facts About HIV/AIDS

On Easter Monday in 1992, during the Freddie Mercury AIDS Awareness Tribute Concert at Wembley Stadium, more than 100,000 red ribbons were distributed, ushering in the symbol’s mass introduction to Europe.

The television programme was seen by more than one billion people in more than 70 different nations. Many celebrities wore red ribbons during the 1990s, inspired by Princess Diana’s prominent advocacy for AIDS.

Wearing a red ribbon is a simple and powerful strategy to combat the stigma and discrimination associated with AIDS. Hence, the Red Ribbon is now a universal symbol of solidarity and support for HIV-positive individuals.