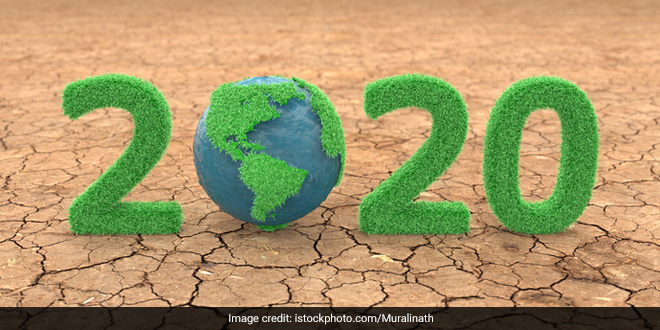 New Delhi:The phrase ‘every dark cloud has a silver lining’ can perhaps also be applied on the COVID-19 pandemic. Following the outbreak of the coronavirus, many countries had adopted lockdown procedures that stopped people from moving out and for shops and other establishments to remain shut. There’s no doubt about the health hazards, loss of valuable lives and economic meltdown that are caused due to the virus. But at the same time, while humans were confined in their houses to avoid contracting the highly contagious virus, the environment got the time to heal. On the occasion of the World Environment Day, let us take a look at some of the ‘silver linings’ observed during the lockdown where the environment was thriving.

Also Read: World Environment Day 2020: All You Need To Know

India is infamous for its notorious air quality, especially in the northern India. S K Satheesh, Professor at Centre for Atmospheric & Oceanic Sciences, Indian Institute of Science (IISc) Bangalore told PTI that there has been a ‘large improvement’ in the air quality due to reduced human activities during the lockdown.

Professor Satheesh noted that the major contributing factors of air pollution are transport vehicles, industries, crop-residue burning, waste burning. He explained that in cities, more than half of the air pollution is caused due to vehicular emissions, adding that during the lockdown, there was a large reduction in the number of vehicles on road.

Ganga and Yamuna are the two most prominently polluted rivers of the country, however, visuals of the rivers that were taken during the lockdown show them relatively cleaner. Aam Aadmi Party MLA and Delhi Jal Board Vice-Chairman Raghav Chadha told NDTV that due to the fact that many industries and offices were closed due to the lockdown, Yamuna is looking cleaner. The stoppage of industrial pollutants and industrial waste has definitely had a positive effect on water quality, he said.

On the other hand, when it comes to the holy river Ganga, experts say that the improvement can again be majorly attributed to the lockdown, however not entirely. Himanshu Thakkar, co-ordinator at South Asia Network on Dams, Rivers and People (SANDRP) explained,

Along with the lockdown there is increased water flow due to unseasonal rainfall and snowfall in some parts. Religious activities have decreased, especially in Varanasi, where lesser cremations are happening. The current scenario should shape our future approach of how authorities should minimise industrial effluents in the water bodies.

Impact On Wildlife and Aquatic Life

While human beings remained home under quarantine, a number of videos of animals strolling on roads have surfaced on social media since the lockdown was imposed. There were many instances where wildlife was seen and caught on camera roaming freely in the areas, where they normally don’t. In an undated viral video from Chandigarh, a sambar deer was captured in the video taking a zebra crossing on a wide, empty road that divides Sector 9 and Sector 10 in the city.

In Kerala’s Kozhikode, policemen on lockdown duty witnessed a critically endangered civet took the zebra crossing and casually strolled past them. Another viral video showed a ‘neelgai’ trotting freely on an otherwise busy road outside a mall in Noida. On regular days, it is nearly impossible for people to cross the road because of the endless movement of speeding vehicles.

When it comes to the aquatic life, Navi Mumbai saw thousands of flamingos settled along the creek in late April, more than one month after the lockdown was imposed. The migratory birds, which visit Mumbai every year, have arrived in huge numbers, as the Bombay Natural History Society reported a 25 per cent increase in flamingo migration since last year, when 1.2 lakh birds had come visiting. The lockdown has also seen a decline in fishing, which means that the fish biomass will increase after over-fishing almost depleted it.

Also Read: This World Environment Day And Every Day, Let’s Ensure We All Come Together To Protect Our Nature: Actor Dia Mirza

The restrictions in vehicular movement didn’t only help the air pollution to decrease, but also had a very noticeable impact on the noise pollution. For at least two months, there was a drastic drop in the honking, no sounds of vehicular engines, no machinery running in the factories and no loudspeakers. The noise of vehicles’ honking and aeroplanes have been replaced by the sounds of birds’ chirping. West Bengal Pollution Control Board released noise pollution specific data for Kolkata, which concluded that there has been a 50 to 75 per cent decrease in the noise pollution during the lockdown.

With improvement in nearly all aspects like air, water, noise and wildlife, trees and plants are roping the benefits of the clean environment and the lack of human activities too. As the world unlocks in phases, experts are urging everyone to consider these environment gains and treat the Mother Earth with compassion and gratefulness.

World Environment Day is celebrated every year on June 5, and the theme for this year is biodiversity – a concern that is both urgent and existential. Recent events, from bushfires in Brazil, the United States, and Australia to locust infestations across East Africa – and now, a global disease pandemic – demonstrate the interdependence of humans and the planet, in which they exist. This year, Colombia will be hosting World Environment Day 2020 in partnership with Germany.