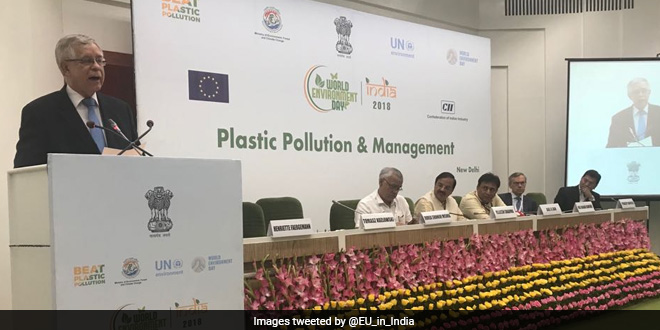 New Delhi: With the World Environment Day 2018 nearing on June 5, a host of programmes and celebrations are simultaneously being held to mark India’s status as global host for the event. The European Union (EU) in India delegation, after hosting a plogging (a Swedish exercise which involves collecting waste while jogging) event on May 31, held a conference along with the Ministry of Environment on plastic pollution. The conference discussed best practices to deal with the problem of plastic pollution and saw European and Indian experts discussing practical solutions to beat plastic pollution.

Small initiatives can make a huge difference as #MahatmaGandhi said "Be the change you want to see in the world." https://t.co/ftTOIOrF74

At the conference, EU Ambassador to India Tomasz Kozlowski congratulated India for its effective initiatives to beat plastic pollution, a reason for which India was chosen as the global host for World Environment Day 2018. Mr Kozlowski said that the EU and India are working together in the areas of addressing environmental pollution, climate change and resource efficiency, including the Union government’s Swachh Bharat Abhiyan. The European Union will support India business initiatives in India which will work in the domain of addressing plastic pollution concerns and sustainability. In September 2018, as a part of Confederation of Indian Industry’s Sustainability Summit, EU’s Environment Commissioner will lead a business delegation of 50 EU companies. Mr Kozlowski stated that EU will continue to cooperate with India on the highly important issue of environmental pollution.

Union Minister of State for Environment, Dr Mahesh Sharma was also present at the conference on plastic pollution and addressed the gathering. As global host for World Environment Day 2018, India is currently witnessing a series of events to mark India’s commitment in tackling environmental pollution. UN Environment Head Erik Solheim is presently in India and is actively participating in several events running up to the big day of June 5.